Josh Hawley Thinks “Rioter” Is a Slur | The Mary Sue 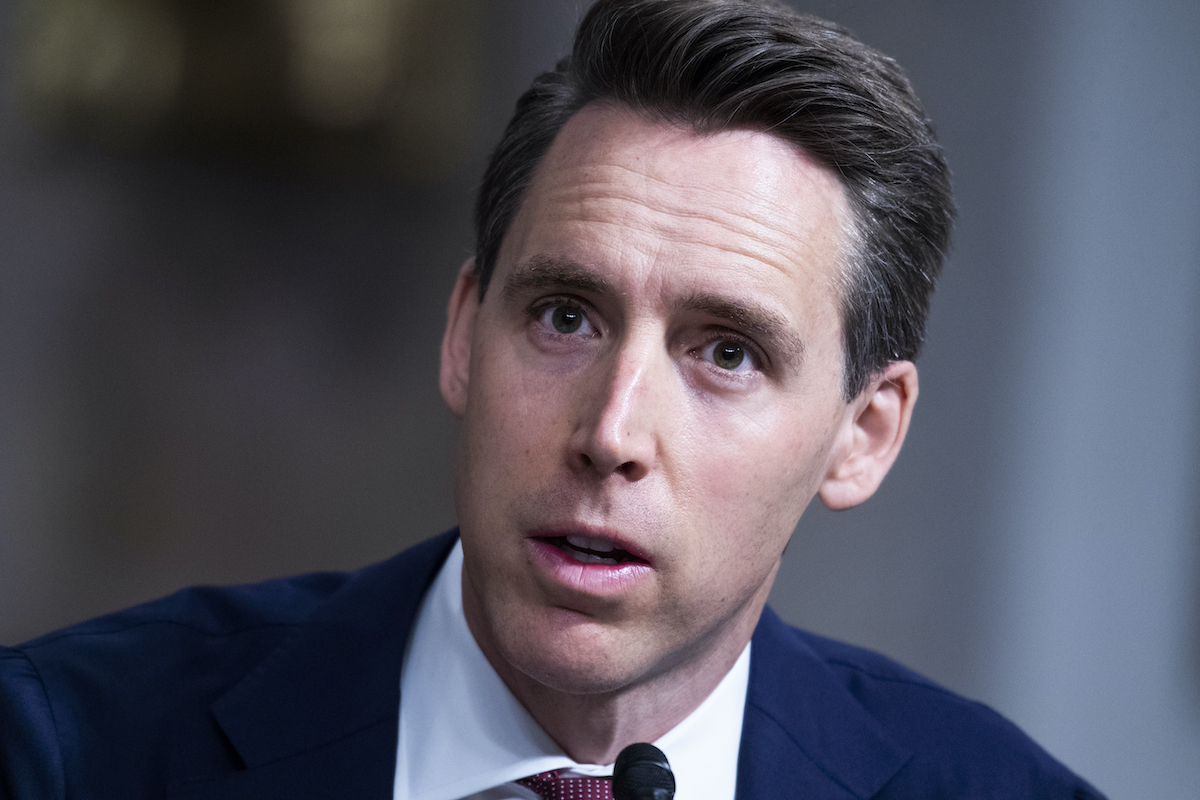 Despite repeatedly declaring that he is being “muzzled” and censored by the mainstream media, Josh Hawley has been giving a deluge of interviews around the release of his new book, The Tyranny of Big Tech, sales of which he’s been promoting via noted big tech mega-corporation Amazon.

In one such muzzling–aka prominent interview with a reputable outlet–the Washington Post asked Hawley about that now-infamous photo taken hours before the Capitol riot on January 6, showing the Congressman raising his fist in solidarity with the insurrectionists.

Asked if he regretted fist-pumping a bunch of rioters, he said he absolutely does not, he doesn’t even know if any of those people he was gesturing to were rioters, and moreover, he takes offense at the very word “rioters,” which he calls a “slur.”

No, because I don’t know which of those protestors, if any of them, those demonstrators participated in the criminal riot, and I think it’s a slur on the thousands and thousands, tens of thousands of people who came to the Capitol that day to demonstrate peacefully, to lump them in with the criminal rioters and say, “Oh, you’re all basically the same. It’s all just the same thing.”

Throughout all last summer, we heard over and over, it’s important to distinguished between the peaceful protestors and the BLM protests and the rioters. I agreed with that then. I said that then. I think the same is true of those on January 6th. The tens of thousands of folks who came to D.C., the overwhelming majority of whom were peaceful and came to demonstrate peacefully, that’s their First Amendment right, and I will absolutely support and defend them in doing that and support and defend other people who I disagree with politically in doing the same thing.

First of all, “rioter” is not a slur. Second, the interviewer, technology policy reporter Cat Zakrzewski, didn’t even say the word “rioter” during this conversation. Hawley, meanwhile, had already said it five times by this point.

Hawley says he doesn’t regret showing support for the MAGAists on January 6 because he didn’t and still doesn’t know which of them were rioters and which were peaceful protesters. And he’s apparently choosing to give all of them the benefit of the doubt until each individual is proven to have been violent.

That’s something HuffPost actually did, by the way. They analyzed photos showing that some of the “protesters” Hawley waved to were in fact later participants in the riot. Still, Hawley–the man who saw a group of peaceful (if bothersome) protesters outside of his home and publicly dubbed them “antifa scumbags”–doesn’t want to rush to any conclusions about the events of January 6.

To his credit, the outlet writes, “Hawley waved to the crowd from across the Capitol plaza shortly before 1 p.m. At a distance of about 200 feet, it would have been tough for him to see all the people very clearly”

However, Hawley would have been aware that many of those “protesters” were already known to have been planning for violence.

“Hawley couldn’t have seen the contingent of Proud Boys, including the now-incarcerated Joseph Biggs and Ethan Nordean, that briefly visited the east side of the Capitol, according to a video taken that day. But he could have known they were in Washington and that there had already been violence and arrests. Members of Congress had been warned to use the Capitol’s underground tunnels to reach the House chamber.”

So no, Hawley didn’t know the intentions of each and every person in that crowd. But he knew there was a very strong likelihood that at least some, if not many or most of those people he was saluting had plans to riot. Yet he chose then and continues to choose now to give the benefit of the doubt to everyone present.

Hawley claims to have shown the same kind of compassionate benevolence to all peaceful protesters. “Throughout all last summer, we heard over and over, it’s important to distinguished between the peaceful protestors and the BLM protests and the rioters. I agreed with that then. I said that then,” he tole the Post. “I think the same is true of those on January 6th.”

That is, of course, simply not true. To Hawley, Black Lives matter is synonymous with the “slur” of “rioter” and it always has been.

Democrats have encouraged rioters & looters who have burned our towns & cities – now Dems are threatening to burn down the Constitution if ⁦@realDonaldTrump and Senate Republicans nominate/confirm a conservative Justice. Voters take note. These people should not have power pic.twitter.com/XGUUMpBgtq

What is going on in St. Louis? Criminal looters and rioters who police refer for prosecution should be PROSECUTED, not released to cause further damage to life and home https://t.co/Ww0QWlxEqQ

If the Antifa scumbags can terrorize my family, they can do it to any family in America. People should be safe in their own homes. And we’re not going to sit back and take it pic.twitter.com/umzOMBiA6l

(via Washington Post, image: Tom Williams-Pool/Getty Images)
Want more stories like this? Become a subscriber and support the site!