Senator Josh Hawley Tweeted About “Antifa Scumbags” Terrorizing His Family. Too Bad for Him, There’s Video. 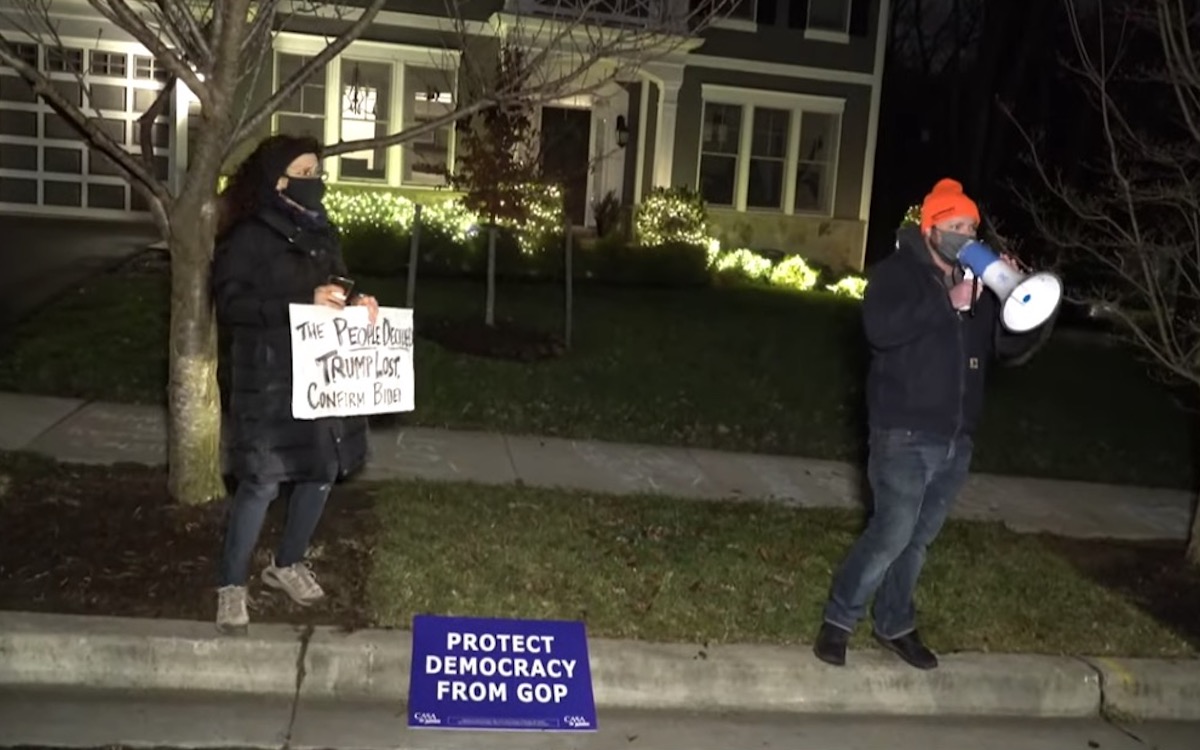 Missouri’s terrible Senator Josh Hawley tweeted Monday night about a group of “Antifa scumbags” who he says came to his Washington D.C.-area house while he was away and terrorized his family. “They screamed threats, vandalized, and tried to pound open our door,” he wrote, adding, “Let me be clear: My family & I will not be intimidated by leftwing violence.”

Boy, that sure does sound scary. Lucky for Hawley and his family, then, that—judging by unedited video of the event—that’s nowhere close to what actually happened.

First of all, this wasn’t “Antifa”—which isn’t a group or organization but a shared political ideology (namely, opposing fascism). It was a group called ShutDownDC, and multiple participants of the relatively small demonstration (there look to be about a dozen or so people present) wore bright orange hats bearing the group’s logo. This wasn’t some scary faceless mob, and no one was trying to hide their identity here.

We’ve gotten some media inquiries about Senator Josh Hawley’s tweets about us…
1. We are absolutely and unapologetically anti-fascists. We are perplexed that someone would use that in the pejorative and we certainly would hope that Senator Hawley also opposes fascism. https://t.co/qtCvM05sdx

2. We visited Senator Hawley’s house for around 30 minutes. We sang songs, chanted and shared our stories. A small group of people delivered a copy of the constitution to his door (with Article II, Section 1 of the Constitution dog eared for easy reference).

The group posted an hour-long video of the protest to YouTube. Much of that shows them finishing making their posters and walking to Hawley’s house. They’re only at the house for about 30 minutes total.

Once they get to the house, the protesters take turns with a megaphone. Some lead standard protest chants, others read statements. They draw on the sidewalk in chalk. At one point, a few protesters briefly go up to Hawley’s door to ask him to come out (apparently not knowing he isn’t home) and to leave a copy of the Constitution. You can see a woman, presumably Hawley’s wife, Erin, interact with them through the window.

And you know what? If I were home alone with a newborn and three people were on my porch, with more down in the street, asking me to open the door, I would not. I would be at least a little frightened. I will absolutely give that to them. What I would not do, however, is take to Twitter and call that interaction “leftwing violence,” because that would be ridiculous of me.

The Vienna, Virginia police department has not been responding to news outlets asking for details, and so far, it’s unknown if a police report has been filed. In the video, you can see a police officer show up and calmly ask the demonstrators to “quiet down” until a supervisor can arrive to determine whether or not the group is breaking any local ordinances.

Around the 40-minute mark of the video, a few more officers show up and the protesters agree to leave, but chant, “We’ll be back,” before going, which I suppose could be that “threat” Hawley tweeted about. The chalk on the sidewalk is the closest thing to “vandalized” property that can be seen.

3. It’s disappointing that Senator Hawley, an member of what presents itself as the greatest deliberative body in the world, would resort to calling us ‘scumbags’. But if he must. We’re happy to call him a snowflake.

All in all, this seems like a pretty tame protest considering Hawley is actively trying to undermine our democracy this week, leading the charge to refuse the certification of Joe Biden as president, based on nothing but unsubstantiated, fully-debunked conspiracy theories involving nonexistent voter fraud.

“Are you trying to say that as of January 20, that President Trump will be president?”@HawleyMO: “Well Bret, that depends on what happens on Wednesday.”@BretBaier: “No, it doesn’t…” pic.twitter.com/KAkNeeaQAj