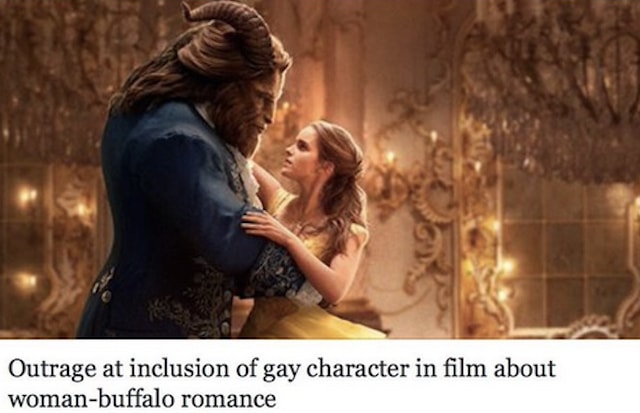 image via The Chaser

Has a mere moment in a film ever generated as much hand-wringing as the revelation that Josh Gad’s LeFou is gay in Beauty in the Beast? Not in recent memory. Now Gad has somewhat clarified what occurs with LeFou, and I’m not exactly encouraged.

Don’t get me wrong, I love me some Josh Gad and have since The Book of Mormon. In an interview with People, Gad takes a measured, thoughtful approach to the non-controversy of LeFou’s sexuality that has become a controversy (Russia just rated the movie “adults only” because of LeFou).

Gad is keen to stress that the whole film is “one of inclusiveness” by its nature, with the primary moral takeaway to “never judg[e] a book by its cover.” This is, after all, the essential message of Beauty and the Beast since time immemorial. Look past what’s outwardly unknown to see the good underneath, and ye will be rewarded.

While much of the coverage around LeFou’s depiction calls him “Disney’s first gay character,” it’s pretty obvious that all we’ll be getting is some innuendo, and—I fear—sexuality played for laughs. LeFou is meant to be a humorous, bumbling lackey, and even if Gad is conscientiously upping the subtext, the nature of his character is to be seen as comic relief, as our Jessica Lachenal pointed out. Worse, Gad makes it clear that the buzzed-about “gay moment” is just that—a passing, likely blink-and-you-miss-it glance. People reports:

LeFou has what Gad calls a “subtle but incredibly effective” scene during the film’s finale that hints at a happily ever after.

So we probably won’t be getting anything else from LeFou but sly winks on the topic until a “subtle” momentary event in the finale (both Gad and director Bill Condon have used the word subtle as a descriptor). Peter Bradshaw in The Guardian calls it “the world’s briefest gay reveal.”

I’m going to go ahead and guess: maybe all the characters are dancing and LeFou is dancing with a dude. Or Belle and the No-More-A-Beast Prince are getting married and LeFou stands waving with a man on his arm. Or maybe LeFou plants a big old smackeroo on Newly Hot Dan Stevens’ Beast. Or he exchanges meaningful looks with one of the now-human members of Beasts’ staff (LeFou/Lumiere, anyone?). No matter what happens, it’s surely a step in the right direction. But it’s not enough. It will be, at best, a moment.

Don’t get me wrong—I think any kind of progress in this area is progress. The inclusion of LeFou’s sexuality clears a path for further depictions in the future, and hopefully the next time it happens it won’t result in canceled movie screenings by hysterical bigots. But I long for the day when a Disney LGBTQIA character gets to be the hero or heroine in their own right, no subtlety included.