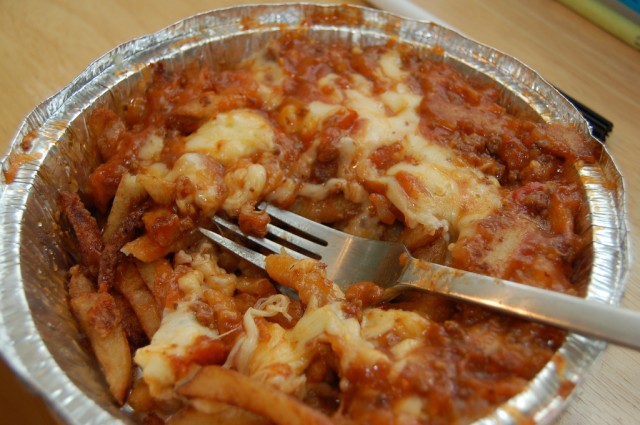 Depending on your feelings when it comes to the oft-maligned poutine, the traditionally Canadian dish of french fries and cheese curds topped with brown gravy, this next bit of news could go one way or the other: Jones Soda is officially bringing a limited edition poutine-flavored soda to market. If that’s just too much for you, take solace in the fact that it’s only coming to Canada. For now.

Jones Soda’s Marketing and social media manager, Andrew Baumann, doesn’t seem to find this supremely strange at all, according to the release:

“With continued requests for these past [limited edition] flavours and calls to keep coming out with more, we decided to create this new, unique flavour as a nod to our Canadian heritage. With a nice balance of rich, savory gravy over a starchy potato base, and accented with those fatty, cheesy notes you expect in a plate of poutine, we believe we’ve developed the perfect liquid version of this undisputedly Canadian delicacy.”

It might just be me, but imagining a “balance of rich, savory gravy over a starchy potato base” combined with “fatty, cheesy notes” just sounds horrific when you place them inside a sugary carbonated beverage. It’d be inaccurate to say I’m retching at the thought, but I’m honestly not that far away.

(via Business Wire, image via Seosaid)