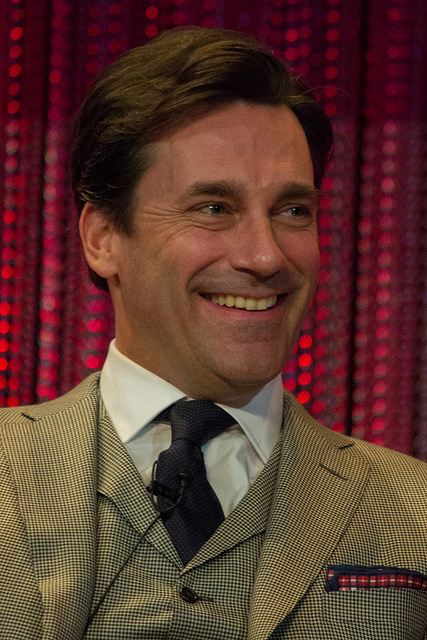 We’ve been very excited about the upcoming Good Omens TV adaptation coming from Amazon and BBC Two, which will star David Tennant and Michael Sheen as the demon and angel protagonists, respectively. Today, we just got a bit more exciting casting news that brings story information along with it!

News broke today that Jon Hamm will be joining the Good Omens cast as the archangel Gabriel, God’s messenger. Now, if you’ve read the novel, you know that Gabriel doesn’t really figure too much into the story. However, the intention of the novel’s authors, Terry Pratchett and Neil Gaiman, was always to expand not only Gabriel, but other angels as well.

According to Deadline Hollywood, Gaiman explains:

“Once we had finished writing Good Omens, back in the dawn of prehistory, Terry Pratchett and I started plotting a sequel. There would have been a lot of angels in the sequel. When Good Omens was first published and was snapped up for the first time by Hollywood, Terry and I took joy in introducing our angels into the plot of a movie that was never made. So when, almost thirty years later, I started writing Good Omens for TV, one thing I knew was that our angels would have to be in there.

The leader of these angels is Gabriel. He is everything that Aziraphale isn’t: he’s tall, good-looking, charismatic and impeccably dressed. We were fortunate that Jon Hamm was available, given that he is already all of these things without even having to act. We were even more fortunate that he’s a fan of the books and a remarkable actor.”

Hamm, meanwhile, was a huge fan of the book before being approached by Gaiman about the show. He tells Deadline that he “read Good Omens almost twenty years ago. I thought it was one of the funniest, coolest books I’d ever read. It was also, obviously, unfilmable. Two months ago Neil sent me the scripts, and I knew I had to be in it.”

It’s cool to know that the six-part series will not only be an straight adaptation of the already-existing novel, but will also incorporate other ideas the original authors had to expand the world. The fact that Gaiman is adapting it himself has me very much looking forward to any changes/additions that will be made in the spirit of Gaiman and Pratchett as a team.

We’ll need to wait until 2019 for the show, however, as that’s when it’s set to debut on Amazon Prime in over 200 countries. That release will be followed by a run on the UK’s BBC Two.