Why Jon Finkel Was and Is My Hero 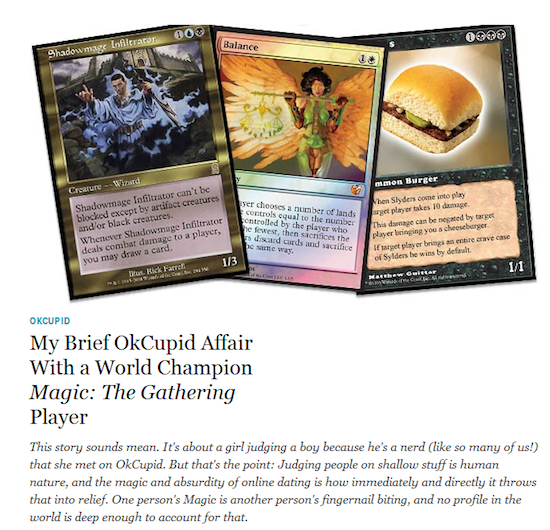 I would definitely go on a date with Jon Finkel. That is to say, if I were single. And into dudes. But the point is that Jon Finkel, as a human being, is someone of interest, a former Magic: the Gathering world champion and straight up smooth. Even after a former Gizmodo intern managed to, well, drag his name through the mud, the internet backlash was something to behold and Finkel’s responses to the debacle have thrust him squarely upon the nerd pedestal. In a good way.

A little history here might be needed: At some point in the past, Alyssa Bereznak got drunk, made an OKCupid account and ended up going out on a date with Jon Finkel. These are the facts as they have been related to us. Apparently, not disclosing your status as a former world champion in a sport — ESPN covered it, therefore, sport — is grounds for disgruntlement.

And there’s the rub; she’s perfectly within her rights not to want to date Mr. Finkel, but making a blog post about it where she purposefully calls him out by name and characterizes him in the poorest terms imaginable is downright despicable. If the tables were turned here and Finkel had made a similar post, he’d have been drawn and quartered as well. It’s not like she couldn’t have seen this coming.

The Internet is a non-forgetting machine of hate. Sometimes, this can be turned to purposes less than evil by enacting a form of mob justice. It may not be right, but I’m sure it must feel good to lambast Bereznak for her color commentary. This could easily turn into that kind of editorial but, as others have pointed out, it only serves to feed the troll.

So, in lieu of the public denouncement that so many might want, let me relate why Jon Finkel was a hero of mine in high school and how this recent exposure 11 years after he was so important to me has brightened my day just a little bit. Maybe that will help explain why so many feel wounded on behalf of the man.

In the year 2000, the year Finkel won his big tournaments, I was 13. I’d only recently begun playing Magic: the Gathering, having started with the Pokémon TCG first. Invasion block was my first real set, though I owned some stuff from the earlier blocks. I even read and loved the novels for that block as they came out. It was at this point that my friends began picking up the lingo and words like “sligh” and “Finkel” began floating around our social circle.

I’m not much of a competitive player. I’m more of Johnny kind of player; I love to build crazy combination decks. But my other friends at the time were far more competitive and fit the Spike model as put forward in the article. They suggested we go to our local Regionals tournament and I figured why not; so I found myself at a DCI sanctioned tournament getting my face stomped in. (I still have my membership card.)

This all happened during Invasion’s Type II (now referred to as Standard) days. So, it was that Jon Finkel had already won his medals, as it were, and his name had become oft-mentioned by competitive players. I even went so far as to buy his official deck when Wizards of the Coast released it. When it comes right down to it, Finkel was one of the most brilliant players the game has ever seen and that fact isn’t exactly disputed.

Even then, I’d often thought of one of my good friends to be similar to Finkel: He was brilliant, savvy and knew when to trust the math over his gut. He’d later go on to play poker, much like Finkel, and for many of the same reasons. This friend’s father was the one who drove us to the Regionals we competed in. It will likely remain etched in my memory as one of the best times in my life. Not long after we returned, my friend’s father took his own life outside our local police department and it changed him. He was never quite the same, though I don’t blame him, and neither was our friendship.

But going to that Regionals event also catapulted me to join a major Magic: the Gathering online community which, indirectly, eventually influenced me to become a freelance writer. I would not be writing this were it not for my love of Magic: the Gathering, and by association, Jon Finkel. My life would be drastically different than it is had I not played that game.

I suspect that a lot of people have stories as to how the game influenced their own lives, regardless of age. So when Jon Finkel, a man who helped shape my life, was tossed under the bus these many years later, it was as if my own life had been tossed with him. The memories of my friend, his father and the times we had together all so much garbage to this woman.