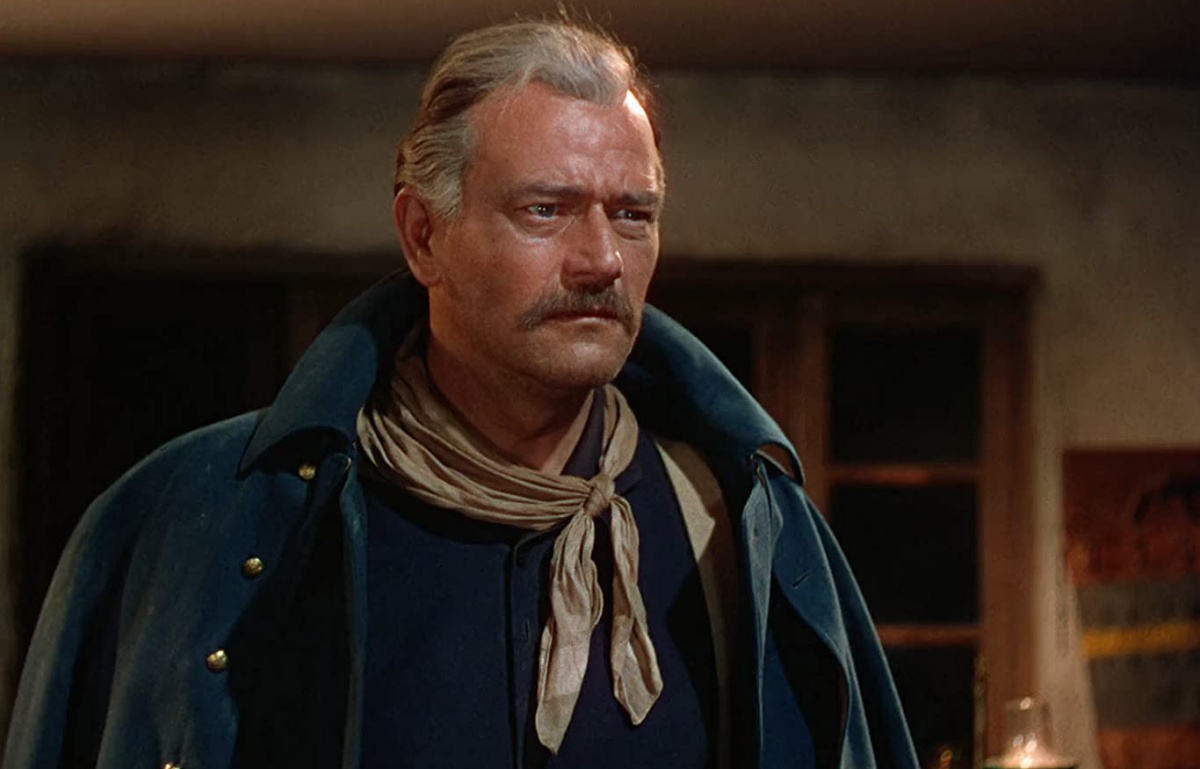 As someone who grew up watching Westerns with my mom, John Wayne’s filmography came up regularly—as did his reputation as someone who was on record in support of white supremacy, which is why there are those pushing to removing his name from the Orange County airport in California. His son, Ethan Wayne, went on Fox News to dispute the idea that “The Duke” was a racist.

The Daily News reports that on Fox News, the late actor’s son stated, “Let me make one thing clear: John Wayne was not a racist. I also understand how we got to this point.”

How exactly did we get to this point? Back in 1971, the cowboy actor gave an interview to Playboy magazine wherein he said:

PLAYBOY: Angela Davis claims that those who would revoke her teaching credentials on ideological grounds are actually discriminating against her because she’s black. Do you think there’s any truth in that?

WAYNE: With a lot of blacks, there’s quite a bit of resentment along with their dissent, and possibly rightfully so. But we can’t all of a sudden get down on our knees and turn everything over to the leadership of the blacks. I believe in white supremacy until the blacks are educated to a point of responsibility. I don’t believe in giving authority and positions of leadership and judgment to irresponsible people.

PLAYBOY: Are you equipped to judge which blacks are irresponsible and which of their leaders inexperienced?

WAYNE: It’s not my judgment. The academic community has developed certain tests that determine whether the blacks are sufficiently equipped scholastically. But some blacks have tried to force the issue and enter college when they haven’t passed the tests and don’t have the requisite background.

PLAYBOY: How do they get that background?

WAYNE: By going to school. I don’t know why people insist that blacks have been forbidden their right to go to school. They were allowed in public schools wherever I’ve been. Even if they don’t have the proper credentials for college, there are courses to help them become eligible. But if they aren’t academically ready for that step, I don’t think they should be allowed in. Otherwise, the academic society is brought down to the lowest common denominator.

For Ethan Wayne, these thoughts only show a fraction of whom he says his father was: “John Wayne stood for the very best for all of us — a society that doesn’t discriminate against anyone seeking the American dream.” He also made the bold statement that if John Wayne had been in Minnesota, he would have “pulled those officers” off George Floyd’s neck.

Yet, this is the same man who said: “I don’t feel guilty about the fact that five or 10 generations ago these people were slaves. Now, I’m not condoning slavery. It’s just a fact of life, like the kid who gets infantile paralysis and has to wear braces so he can’t play football with the rest of us”

And … “I’ve directed two pictures and I gave the blacks their proper position. I had a black slave in The Alamo, and I had a correct number of blacks in The Green Berets. If it’s supposed to be a black character, naturally I use a black actor. But I don’t go so far as hunting for positions for them”

And … “Hard times aren’t something I can blame my fellow citizens for. Years ago, I didn’t have all the opportunities, either. But you can’t whine and bellyache ’cause somebody else got a good break and you didn’t, like these Indians are. We’ll all be on a reservation soon if the socialists keep subsidizing groups like them with our tax money.”

Back during the 2016 campaign, Trump was endorsed by John Wayne’s daughter, Aissa, and after getting that endorsement, Trump said, “If John Wayne were around, he’d be standing right here instead of me.” How could the same man who would have “pulled those officers away” be a figure that y’all so easily allow Trump to co-opt? A literal bigot in chief.

This isn’t the first time these stories have come up; they have been circulating for more than 30 years, but because of the environment of today, there is some momentum behind these changes.

When it comes to John Wayne, I can’t say that I knew the man, certainly not better than his own son, but we know the truth that Wayne allowed us to see. These interviews came out in ’71, and he lived until ’79. If we wanted to clarify how he felt, especially towards the end of his life, he could have. As someone who didn’t know him, but sees his words, his actions during HUAC, and his overall political career, yeah, he does sound like a bigot.

The Playboy interview wasn’t some out-of-context smear campaign against Wayne. He was asked questions and answered them the way he saw fit:

PLAYBOY: What kind of films do you consider perverted?

WAYNE: Oh, Easy Rider, Midnight Cowboy—that kind of thing. Wouldn’t you say that the wonderful love of those two men in Midnight Cowboy, a story about two f*gs, qualifies?

No one told him to say that. You can say he was a product of his time, but there were gay actors and liberals in Hollywood fighting for Civil Rights and paying the price for it. John Wayne, as a figure, is complicated because he has been deifed when he was always just a man.

As for the airport, what I find interesting is that this interview came out in 1971, and the airport was named after him in 1979, the year he died, and they put a statue up of him in 82. What disturbs me is that, despite the interview, there was no thought or consideration about the racist things he said when making these decisions. That, to me, is the more damaging legacy of his name being there—not just that he said it, but that people thought he was right.