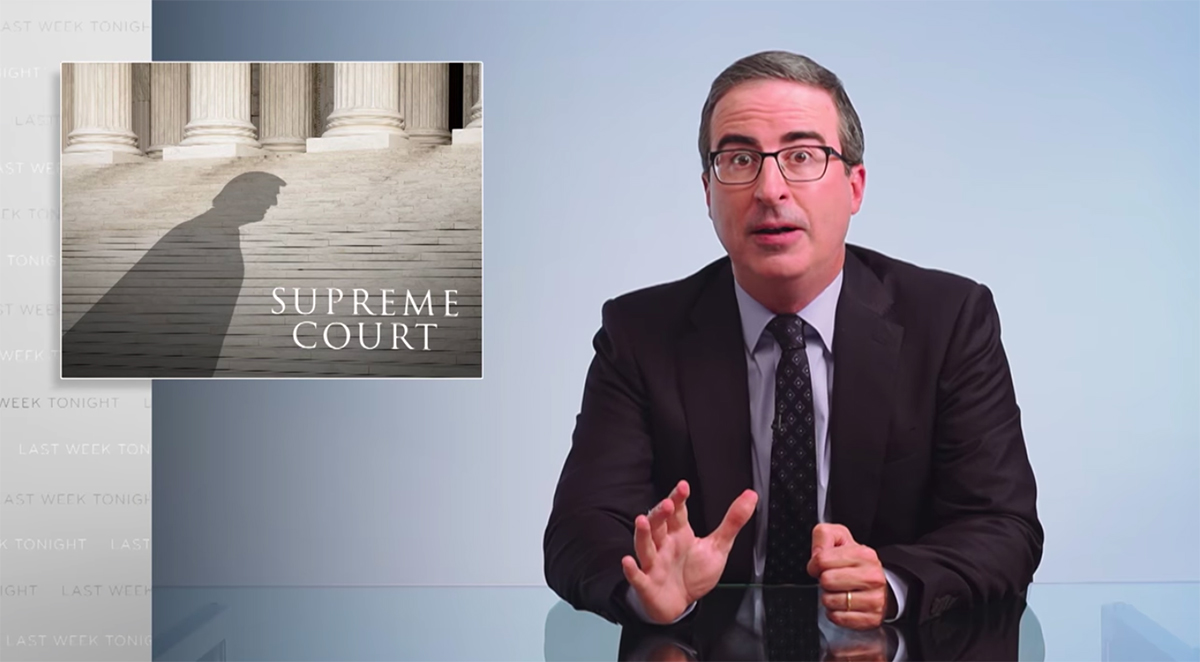 Donald Trump made his next Supreme Court nomination over the weekend, and while many of us have taken to making terrible jokes about The Handmaid’s Tale life that we’re all about to lead, it’s terribly upsetting. And John Oliver isn’t trying to sugarcoat it. On the most recent episode of Last Week Tonight With John Oliver, the host talked about the importance of this Supreme Court pick and how, back when Republicans blocked Obama from appointing Merrick Garland back in 2016, they were also seemingly determined to block any Democratic pick that came their way if Hillary Clinton won the election.

So, no matter what, Republicans did not want another liberal judge on the Supreme Court. And now, with the passing of Ruth Bader Ginsburg (a liberal icon), Republicans are doing what they do best and taking us back about 50 years in regards to feminism and putting in an extremely conservative judge named Amy Coney Barrett who is only 46 years old—meaning that “life on the stand” part of the Supreme Court could have Amy Coney Barrett dictating what I can do with my body as a woman for many years to come.

“If things seem hopeless right now, it’s because, to be completely honest, they basically are,” Oliver said, and you know what? He’s right. He’s absolutely right, and it’s not just Amy Coney Barrett taking away rights from women (because you know, without a shadow of a doubt, that it is happening) but it’s literally everything.

But even in that upset, in that hopelessness, John Oliver still does what he does best and shows us how we, as a nation, got here and how (the f***) we can fix this. What’s terrifying about all this is that Trump gloats about the amount of lower court appointees he’s made. Since he became president, he has added over 200 conservative judges, and it has all been a systematic approach by Republican Senate Majority Leader Mitch McConnell. He made it his duty to leave those vacancies that arose during the Obama administration so that a Republican conservative could be the one to fill them.

That’s much like how he and Lindsey Graham actively fought against President Obama’s appointment of Merrick Garland in 2016, and instead we have gross frat boy Brett Kavanaugh to turn to. As Oliver points out, Obama didn’t “give” Trump over 200+ seats to fill. Obama was actively blocked from filling those seats by Republicans.

Remember how this is supposed to be a “checks and balances” system?

“So the fact is, when Barrett is confirmed, a president who lost the popular vote will have picked a quarter of the federal judiciary and a third of the Supreme Court and his choices will have been rubber-stamped by a senate Republican majority representing 15 million fewer people than the Democratic minority. And if that sounds absurd to you, it’s cause it clearly is,” Oliver said about the number of officials placed in office under Trump, and it also clearly shows a flaw in our system.

Oliver went on to talk about my favorite topic of conversation: Getting rid of the Electoral College. What’s interesting to me is that not one Trump supporter paid any amount of attention in civics class in school, because every single one I’ve fought with about the electoral college seems to conveniently forget why it was created in the first place.

The “farmers” wanted the electoral college back in the day so that their states’ opinions would count as much in an election as those from more populous states. Do you want to know why those “farmers” wanted it to be based on population and not just the votes of the people? Slavery. They wanted the population of their slaves to up their chances at keeping their slaves when northern states wanted slavery abolished, by giving their own voices outsized weight.

So those who defend the Electoral College? You’re supporting a system that was created to benefit slave owners.

But in the segment, Oliver points out that there was a time in our history (back in the late ’60s) when we tried to abolish the electoral college, but it was blocked by a filibuster—which brings us to his point of getting rid of filibustering in general. The idea is to talk and talk and talk until time runs out and nothing gets voted on. When you think about it, it’s a horrifically American way of doing things. I mean that literally: It is so very American that it’s scary.

But with filibusters comes the fact that nothing of meaning can get done because Republicans can just block Democrat acts.

By the end of the episode, I found myself crying because John Oliver pointed out that not only is this battle to regain any sense of democracy going to be long, but it’s going to be hard. And we have to keep fighting because within four years, an administration that did not have the population behind them managed to systematically change our judicial system to their benefit, and they’re continuing to do so right under our noses. None of this is “for the people,” and none of this is by the people.

We’re being forced into a country that the majority of us did not vote for, and that’s truly f**king terrifying.