Get ready to rely on your little grey cells again—we have a new Hercule Poirot in town.

John Malkovich is the latest actor to take on the iconic role of Agatha Christie’s brilliant, exacting detective Hercule Poirot. Malkovich will play Poirot in Amazon’s THE ABC MURDERS, a limited series for Prime Video that debuts in the US on February 1st. The series has already begun airing on BBC One in the UK, so if you’re watching, be sure to tell us your  thoughts in the comments.

I was excited to discover that many members of The Mary Sue community are Poirot fans. We’ve discussed my favorite Poirot, David Suchet, we’ve pored over the details of Kenneth Branagh’s outrageous mustache, and you introduced me to the sleuthing of Albert Finney’s Poirot in the classic 1974 Murder on the Orient Express film. I think it’s a sign of how much love our favorite fussy Belgian engenders that I feel thrilled at the idea of fresh Poirot content rather than tired. But what do we think about this new incarnation?

Malkovich seems like a bit of an unorthodox pick for Poirot. The Academy Award-winning American actor often plays antiheroes and villains, but the multi-layered complexity he brings to those roles could work well for Poirot, who is a complex man. Malkovich’s Poirot in the trailer seems to have a much darker edge than previous Poirots. (I hesitate to say that we’re getting a “gritty” Poirot, but the gristly action we see here suggests it.)

Our latest Poirot is definitely not on the cuddlier side like Suchet, his facial hair isn’t cartoonish like Branagh’s, and I’m not sure what he’s doing with that accent, but I can’t wait to see where Malkovich takes the character. From what the trailer shows, the production looks top-notch and stylishly on point with its ’30s setting.

If you’re not familiar with the plot of THE ABC MURDERS, here’s the series’ official synopsis:

It’s 1933 and a killer travels the length and breadth of Britain via the railway network. The killer uses the alias ABC, and strikes in a methodical pattern, leaving a copy of the ABC railway guide at the scene of each of murder. As Poirot (John Malkovich) attempts to investigate he is thwarted on every front. If he is to match his most cunning nemesis, everything about him will be called into question: his authority, his integrity, his identity.

The three-part limited series hits Prime Video on February 1st. It co-stars Rupert Grint, a.k.a. Ron Weasley, which is excellent news because Grint was a bright spot in the Harry Potter movies (don’t @me, Weasley haters, I will fight you). It’s written by Sarah Phelps, who also adapted the previous Agatha Christie limited series Ordeal by Innocence. Critics who reviewed THE ABC MURDERS in the UK have been positive, though there appears to be dissent within the “Christie purist” community.

Further questions: I’ve seen the David Suchet Poirot take on The ABC Murders; what do we think about the 1965 “comedic” movie starring Tony Randall? What in god’s name is going on with its movie poster? 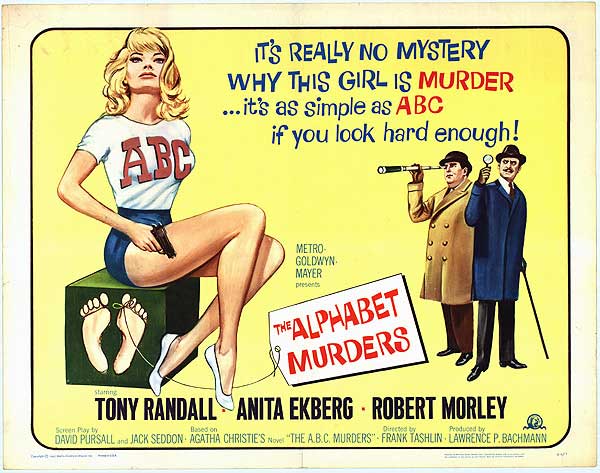 But most pressing: what are your thoughts on Malkovich as Poirot?