"Am I supposed to just tolerate all of the older men in my life who make me uncomfortable?" - Camryn Garrett 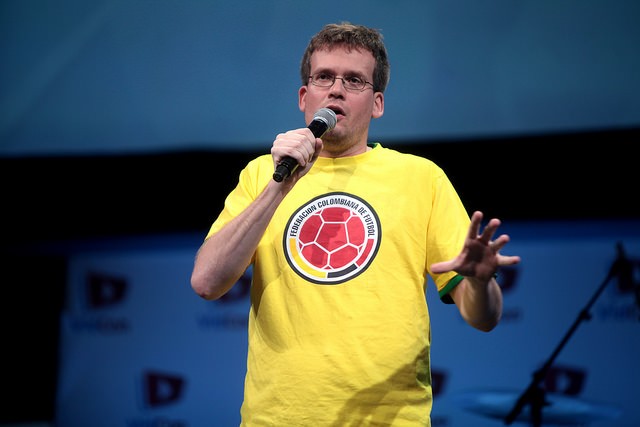 [UPDATED 7/3/15 10:14AM] Editor’s Note: I corrected the name of the Tumblr user who wanted to prod Green to react below. It was not whitegirlsaintshit, but astro1995 who made that particular comment. Apologies for the mistaken attribution.

What should’ve been a molehill has turned into a mountain, and it really, really shouldn’t have. Because adults should know better.

About two weeks ago on Tumblr, a user named virjn (who doesn’t seem to have posts up anymore?) posted the following opinion of YA writer and Vlog Brother, John Green, and the way he handles his public persona:

when in reality it’s because he’s a creep who panders to teenage girls so that he can amass some weird cult-like following. and it’s always girls who feel misunderstood, you know, and he goes out of his way to make them feel important and desirable. which is fucking? weird?

also he has a social media presence that is equivalent to that dad of a kid in your friend group who always volunteers to “supervise” the pool parties and scoots his lawn chair close to all the girls.

That was the post in its entirety. Now, as Huffington Post teen writer, Camryn Garrett points out, “Okay. Awesome. She said her piece, right? And nowhere in that chunk of words did she accuse John Green of sexual assault.” Now, I have no way of knowing the gender of the person who posted this (Garrett says “she,” probably assuming that since Green’s primary YA fanbase is female that the critic is, too), but they most certainly did not accuse John Green of sexual assault, or even likely to commit sexual assault. Just the opinion that he gives off Creeper Vibe.

Hell, I think John Malkovich is creepy. It’s completely irrational, and I know this. I know objectively that Malkovich is a talented, accomplished actor, and though I don’t know him, I’m sure he’s a perfectly fine, decent human being. That said—creepy. I can’t watch a film of his without shuddering a little. Much the way that some people have Resting Bitch Face (or alternately, Resting “This Wouldn’t Bother You If I Were a Guy” Face) and that’s just their face, some people just give off a creepy vibe. Often times, it has nothing to do with the person.

But John Green took to Tumblr himself a couple of days ago after someone tagged him in a reblog of the above statement, and got a bit lecture-y and defensive for no real reason:

You want me to defend myself against the implication that I sexually abuse children?

Okay. I do not sexually abuse children.

Throwing that kind of accusation around is sick and libelous and most importantly damages the discourse around the actual sexual abuse of children. When you use accusations of pedophilia as a way of insulting people whose work you don’t like, you trivialize abuse.

Whoa, whoa, whoa, home slice. No one has actually accused you of pedophilia. Granted, there were implied comparisons to pedophiles, that’s clear, but they were using the comparison to explain how they felt about you, which is very different than accusing you of a crime. Now, I’m sure it isn’t pleasant to hear stuff like that. At the same time, you’re throwing around some pretty unfounded accusations yourself by saying that this person is “trivializing abuse” by “throwing that kind of accusation.” They didn’t accuse you of anything.

What’s more, it was some other assclown on Tumblr (astro1995, who seems to have subsequently deleted the offending comment) who made sure to tag Green saying “lets get this enough notes so he has to address it and try to defend himself lmao.” Great, so you basically fell right into the hands of someone who’s purposely tagging you and laughing their ass off. You wanna be righteously angry about something? Be righteously angry at that person.

Speaking of righteous anger, Green goes on in his Tumblr post:

I’m tired of seeing the language of social justice–important language doing important work–misused as a way to dehumanize others and treat them hatefully.

So we all seek (and seek to share) the jolt that accompanies outrage and anger. As studies have shown, the complicated dopamine rush that comes with righteous indignation is very powerful, and I’m indulging it simply by responding to the outrageous accusation that my work is somehow evidence of sexual abuse.

But the outrage cycle is exhausting, and while there are wonderful examples of outrage fueling long-term, productive responses to injustice–We Need Diverse Books and the UPLIFT both come to mind–too often the Internet moves from jolt to jolt, from hatred to hatred, ever more convinced of our own righteousness and the world’s evil. And getting caught up in that is very painful.

I agree! At the same time, I don’t think that the “righteous indignation” cycle started with the original poster. I think it started with John Green. And it continued with other YA authors like Maureen Johnson, Sarah Dessen, and Chuck Wendig coming to Green’s “defense” and twisting this into a conversation about call-out culture and online abuse, which is not what this was.

I’d recommend reading Camryn Garrett’s Huffington Post essay that’s linked to above, as she provides some insightful words about what Green’s reaction means to a teenage girl.

What I’ll say is this: if you’re writing literature for teen girls, you should know not only how to dialogue with them better, but you should recognize that you’re the adult in the conversation. I’m not saying talk down to them—far from it. But I’m saying that as an adult, you (should) have more context and insight to work with. If a girl thinks you’re creepy because of how she perceives how you run your publicity, there are reasons for that. Girls and women are trained to be on alert at all times around men, particularly men in positions of authority—one of the awesome things about being part of a patriarchy. /sarcasm

A fan expressing feeling “creeped out” might have been a wonderful opportunity to be super-clear, and perhaps even to start a conversation about why a female teen reader might feel that way. Like “First off, you should know that my only reason for being so open with my fans is not to ‘amass a cult-like following,’ but because I genuinely care what happens to them, and I enjoy providing a vehicle through which they can communicate with each other, and with adults like me, about the things that affect their lives. But I think it’s important that you bring this up, because I understand why a young person, particularly a young girl, might be suspicious when they see an adult having this kind of following. So, let’s talk about it…”

Look, I’m not here to write your PR for you, Mr. Green. You’re a writer. You can do that yourself. What I’m suggesting is that before you get to the righteous indignation place, you remember that your fans are still developing the way they express themselves, both online and in the world, and that it’s possible to take them seriously while also remaining the adult in the relationship and not lowering yourself to their semi-accusatory level. Your platform puts you in a position of power that you can use for good. The pen is mightier than the sword. Wield it well.