Star Wars: The Force Awakens‘ John Boyega and the Importance of the Unlikely Hero 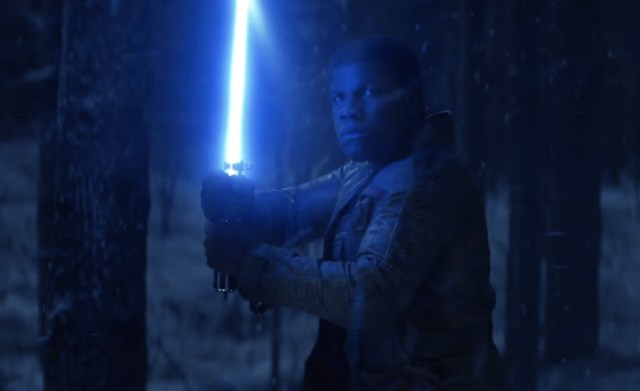 I, like many others, have been immersed in the world of The Force Awakens. I saw it opening day and then two more times after that–all before Christmas. I excitedly waited for those in my close circle to see it for themselves so we could discuss favorite scenes and fan theories. I counted down the days for the unofficial social media moratorium on spoilers to be over so I could tweet my feelings without fear. The Force Awakens reinvigorated my Star Wars fandom love (the first I’ve had since before I even knew what to call it), but it also gave me a myriad of new characters to love and appreciate. When it came to picking a favorite, however, no one was more surprised by my brain’s ultimate pick than myself.

My Force Awakens favorite isn’t Rey (although my love for her is strong, no doubt about it), nor is it Poe Dameron (in spite of my Twitter feed’s insatiable Oscar Isaac thirst). No, my favorite is Finn—the stormtrooper who renounces everything that’s been programmed into him since he was taken from his parents at birth and trained by the First Order, the young fighter who pulls off some sweet moves with a lightsaber, and the friend who ultimately realizes that the most important thing is the people who will have your back when the obstacles appear to be insurmountable.

A large part of that is due to John Boyega’s portrayal of Finn. He’s believable in his sincerity; his compassion for others makes him endearing. He’s quick to follow Poe’s lead in the TIE fighter during their daring escape. He fully acknowledges Rey’s capabilities after witnessing her beat down two other scavengers, but that doesn’t stop him from checking in to see if she’s alright in spite of being the one who was knocked out during the First Order’s attack on Jakku. (There’s a great prequel young adult novel that also sets the scene for his protective tendencies—in Before the Awakening, which takes a look at the main trio’s lives just prior to TFA, Finn (or FN-2187, as he’s known then) adopts a ‘leave no man behind’ philosophy in the midst of his stormtrooper training that rankles his superiors, Phasma in particular. The First Order is only as strong as its weakest link, but as the head of his unit, FN-2187 believes he’d be failing as a leader if he didn’t go back for a fallen man.)

I was immediately struck by the common thread of the redeemable hero in Boyega’s roles while watching an earlier film he had starred in, 2011’s Attack the Block. Gang leader Moses is quiet and stoic where Finn is outgoing and emotive, more authoritative in his command of his group versus Finn’s subservience to the First Order. Finn has been cited as a representation of the Star Wars audience, amazed and wondering at everything he gets to experience for the first time; Moses is a product of his neighborhood and no stranger to the hypocrisies and dangers of the tower block he lives in–but the parallels between them are there. A character perceived by others as a villain—or, barring that, simply one of the “bad guys”—makes the switch to fight against evil rather than contribute to the cycle any further.

Finn’s initial choice to escape the First Order and later join the Resistance might seem impulsive against Moses’s final decision to save his tower block, but I’d argue that their journeys are equally a slow burn. It’s not Finn’s first instinct to fight for the Resistance; he’d rather turn tail and fly to the fringes of the galaxy, but his allegiance to Rey ultimately dictates his path. Moses’ contemptuous relationship with the local police forces him to acknowledge that he and his gang of friends are realistically going to be their block’s only hope. No one else will be coming to save the people they care about; it’s going to be up to them to be the hero. The Dark Side turns to the Light; the criminal becomes the savior of the block.

And, of course, both characters have their ultimate moment of badass—Finn’s two showdowns while wielding Luke Skywalker’s old lightsaber are worthy of note (and perhaps an indication of Force sensitivity), while Moses’ final encounter with the aliens attacking South London contains one big slow-mo, long-tracking-shot ode to courage in the face of overwhelming odds.

Whether these young men believe themselves to be heroes, however, is left up to interpretation, but more often than not, the real heroes of narrative are the ones who either decide not to dwell on their own epic feats or simply don’t think that what they do sets them apart in any way. Their beginnings may not have been entirely good, but their brave and often selfless actions bring them that much closer to redemption. They save the world because, in the words of Finn, “it’s the right thing to do.” (Or sometimes they just need a pilot.)

I can appreciate superhero fiction and the journey of the character who has always fought for justice and truth, but it’s the unlikely heroes who feel more meaningful to me. Their stories, with all their imperfections, are the ones that we can project ourselves into. They’re relatable, they’re accessible, and they make you root for these guys that much harder.