Which Characters Have Force Sensitivity in The Force Awakens? 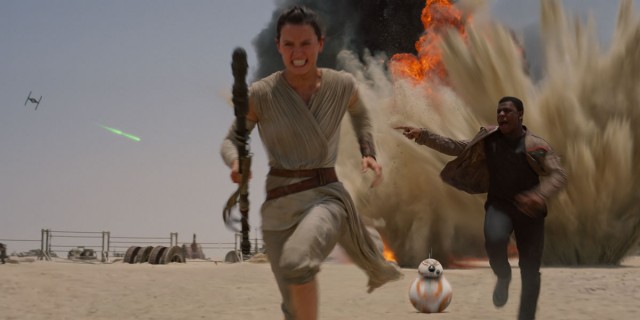 If you haven’t seen The Force Awakens yet, then you might want to back away from this post, because it includes a lot of plot details and speculation about the film.

The marketing for The Force Awakens put a lightsaber in Finn’s hands over and over again – yet many audience members (and critics) left the theatre with the sense that this was a bait-and-switch. One of the bigger twists of the movie is that Rey turns out to be force-sensitive; she ends up using her powers throughout the movie, leaving no doubt in anyone’s mind that Rey could become a powerful Jedi (or a powerful Sith — although, of course, we all hope not).

Where does that leave Finn, however? Does he have any force sensitivity?

I would argue that he does – although, I admit, I’m heavily biased by the fact that I want Finn to have force sensitivity. I think the story going forward would be a lot more interesting if both Finn and Rey could use the force, and if both of them ended up learning to use their powers in different ways.

Since The Force Awakens came out, I’ve seen a lot of comparisons between Poe, Rey, and Finn and the original trio in A New Hope. The comparison I see most often is that Poe is Leia, Finn is Han and Rey is Luke. Let’s not forget, however, that the original movies had two Force users, not one! Although Leia never got to use her powers much in the original films, we always knew she had some sensitivity to the Force. Therefore, there’s no reason for us to assume that the new movies will feature only one Force user in its core cast. Sure, it is pretty clear that Rey is “the Luke Skywalker” of this franchise. But when it comes to Poe and Finn, it does seem likely that at least one of them – if not both of them – might also be force-sensitive.

Based on what we’ve seen so far, I personally think it’s more likely that Finn is force-sensitive, but I’ve also seen some speculation about Poe. I’m going to focus primarily on Finn in this post, but I invite you all to speculate further in the comments about what might happen in the movies going forward.

Also, this entire debate seems like a plot point that was left intentionally vague in The Force Awakens, so it’s entirely possible that the future writers haven’t even decided yet as to whether or not Finn will be force-sensitive. However, by putting the lightsaber in his hands on the poster, plus including a lot of scenes that seem to imply Finn has the Force, I think the groundwork has been laid. Let’s go over the evidence:

1.) Finn uses a lightsaber a lot for someone who isn’t going to end up learning the ways of the Jedi.

I’ve seen a lot of talk about how Finn is either “too good” or “not good enough” with the lightsaber during his scenes. Clearly, this is a subjective matter, and I haven’t seen the movie enough times yet to say where I stand on it. But here are the facts:

Overall, this movie seems to be going back to the older version of how the Force worked – it’s less about midichlorians (cringe), more about how the Force is all around us. Some people are “naturals” at tapping into the powers of the Force, but it’s still an omnipresent guiding element in the universe. Speaking of which …

2. Finn is just too lucky not to be force-sensitive.

I keep seeing people say that even if Finn is a force user, he’s not as “naturally” talented as Rey – but I’m not sure that holds up. Let’s recall all the times in this movie when Finn seems to be able to get out of scrapes for no conceivable reason. Even if you didn’t think Finn’s lightsaber battles were impressive enough, you have to admit that there are several other moments when Finn seems bizarrely adept at tasks that he’s never had any opportunity to learn.

3. Finn didn’t have as much time to practice his abilities as Rey.

Rey seems like a “natural” when it comes to using the Force – but perhaps that’s because she’s got a hell of a lot of free time on her hands compared to anyone else in this movie. Given how much time she spends completely alone, it seems realistic that she would have a gift for electronics and engineering. A girl’s gotta kill time somehow, right? Anyway, it’s believable that Rey would consider herself to be “naturally” good at certain tasks as a result. She has a lot of free time to teach herself skills and she has no one else to compare herself to, so for all she knows, she’s a “normal” learner at everything, as opposed to an absurdly gifted learner aided by the Force.

By contrast, Luke had to spend a lot of his youth working on his uncle’s farm, which is a hugely time-consuming responsibility; he still managed to learn how to do some things in his free time, though. Finn’s time, however, definitely wasn’t his own. He had no free time or opportunity to learn how to do any of the things that Rey is a “natural” at doing — piloting abandoned ships, learning engineering, and so on. Admittedly, Rey seems like a “natural” at fighting off Kylo Ren’s mental invasions. But Finn has had to fight off mental brainwashing that’s been going on for almost his entire life — and he successfully does it! Clearly, both Rey and Finn demonstrate a lot of mental aptitude and acumen; they’re both very fast learners when it comes to all the new challenges that face them along the way.

Throughout the movie, both Rey and Finn have a lot of moments where they seem to be unusually lucky. Perhaps Rey has more of these moments than Finn does — but I’m not ready to rule Finn out as a potential force aficionado. I’m also not sure I buy that the movie didn’t intend to leave this question open for us. I walked out of the movie assuming that both characters were implied to have force-sensitivity, and I admit to being somewhat baffled by the assumption that Finn doesn’t have powers. It felt to me like there were so many scenes that proved otherwise!

It seems like one reason why people are assuming that Finn doesn’t have the Force is because people have already begun to see him as “the Han Solo” of the movie — which is understandable, I guess, since this movie has a lot in common narratively with A New Hope. I get why people are putting Poe, Rey, and Finn into the neat little boxes of the former trio … but maybe we shouldn’t assume we know exactly where this story is going, especially since I don’t think the specifics have even been decided yet. Why would we want to cast these character as archetypes so quickly? Haven’t they already proven they’re very different, in terms of their own back-stories and chemistry with one another?

I don’t know what the writers will decide, obviously — but based on what The Force Awakens has set up so far, I think it would be really cool to see both Finn and Rey using the force, perhaps learning how to use their powers separately, then meeting up later and comparing notes. Perhaps Rey will be tempted by the Dark Side — but Finn’s own history with the First Order would prevent him from ever considering such a path.

I don’t know. There are a lot of options on the table. I’m not ready to rule any of them out just yet … and I hope the screenwriters aren’t, either.