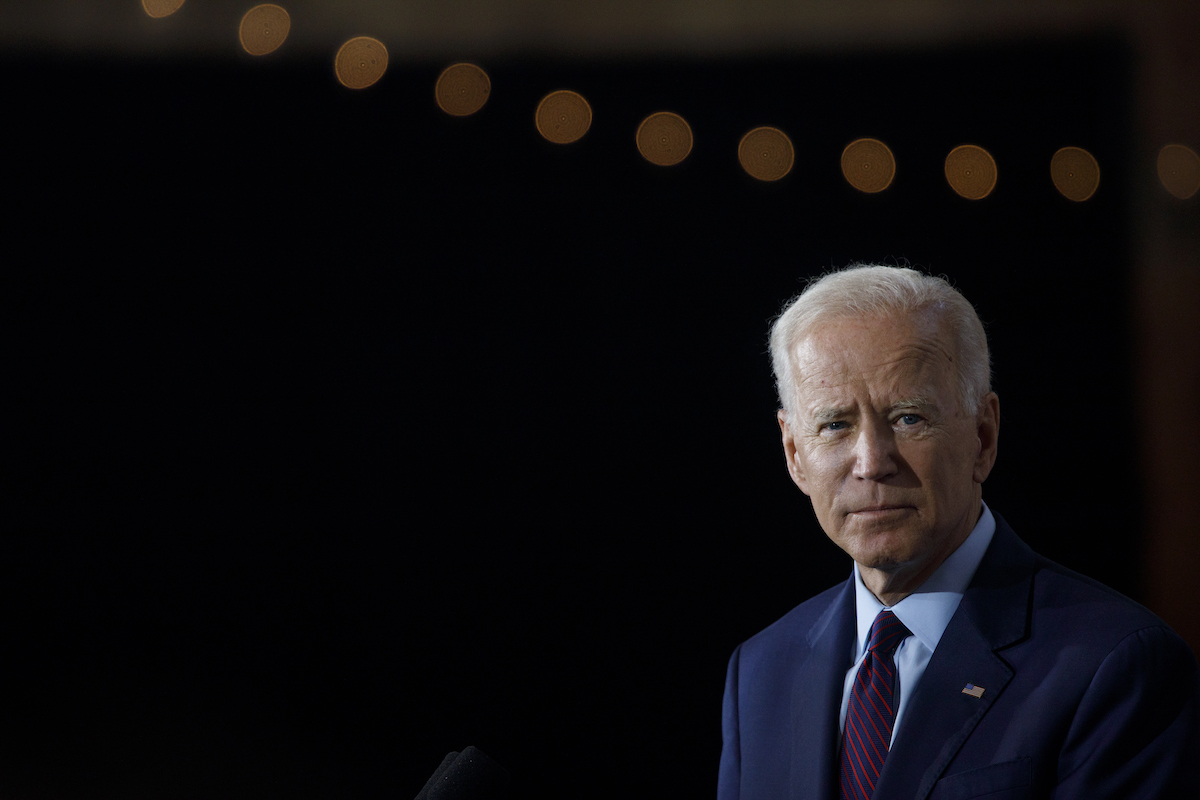 After spending more than a month ignoring allegations of harassment and assault made by his former staffer Tara Reade, Joe Biden has finally issued his own statement.

In a piece posted to Medium, Biden starts by touting his credentials, citing how he wrote the Violence Against Women Act. “When I wrote the bill, few wanted to talk about the issue,” he writes. “It was considered a private matter, a personal matter, a family matter. I didn’t see it that way. To me, freedom from fear, harm, and violence for women was a legal right, a civil right, and a human right. And I knew we had to change not only the law, but the culture.”

“In the 26 years since the law passed, the culture and perceptions have changed but we’re not done yet,” he goes on to say, adding that he recognizes his responsibility “to be a voice, an advocate, and a leader for the change in culture that has begun but is nowhere near finished. So I want to address allegations by a former staffer that I engaged in misconduct 27 years ago.”

“They aren’t true,” he writes. “This never happened.”

He goes on to give the only kind of evidence he really can in what is, as is so often the case, a situation where there can never be definitive proof. He says that Reade has no evidence of the existence of a complaint she says she filed with his office, and he has asked for The National Archives, the one place he says such a complaint would be kept, to make it public if they have it. He says there are “inconsistencies” with her story. He says reporters spoke with dozens of his former staffers and could not find one to corroborate Reade’s allegations.

Biden’s denial will be satisfying to a lot of people, and we’re glad he’s finally said something instead of letting others shoulder that burden, even if it’s awful that he waited until his hand was basically forced by Donald Trump practically trying to band together with him around the mantra of “false accusations.”

But there are some holes that bear speaking about.

Biden says Reade’s supervisors don’t have a record of her complaint. Reade, though, has said that she complained not to her supervisors but to U.S. Senate personnel, and that word got back to Biden’s staff, at which point Reade saw her duties diminished.

Biden says no former staffer could corroborate her story, but Business Insider spoke to an intern who worked under Reade who “does corroborate Reade’s claim that she was abruptly relieved of her duties as intern supervisor in April 1993, a move that the former intern found odd at the time,” and one of Reade’s colleagues at a later job in a state senator’s office said that Reade told her she had been harassed by her former D.C. boss.

We also have to remember that even if reporters hadn’t found any corroboration, that isn’t proof that Reade is lying, either. In defending Biden earlier this week, Stacey Abrams said that “The New York Times did a deep investigation and they found that the accusation was not credible,” which just isn’t true. What the Times wrote was that they “found no pattern of sexual misconduct by Mr. Biden,” not proof that no misconduct ever happened or anything to discredit the accusation.

As for the idea that Biden’s history with fighting violence against women precludes him from committing an act of violence himself, well, that’s just completely baseless. Nancy Pelosi—one of the many women lately who has been charged with answering for Biden when he himself would not—said this week that she believes him and supports him, in part because, as she put it, “Joe Biden is Joe Biden.”

That’s the same argument that was used last year when several women (including Reade) came forward to speak about how Biden’s overly familiar touchiness was inappropriate and unprofessional. So many people jumped to Biden’s defense, valuing what they perceived as his intentions over the actual pain and discomfort his actions caused women.

A lot of people right now are drawing comparisons between Tara Reade and Christine Blasey Ford’s allegations against Brett Kavanaugh. Many of these are bad-faith arguments from gleeful right-wing trolls who are more interested in crying “hypocrisy” than in helping women. Those people do not care about women’s pain, but they are reveling in what is, for many who do, a difficult position, drawing a stark contrast between themselves and people who actually care about stopping harassment, assault, and rape. How can you support the #MeToo motto of “believe women” while still supporting Joe Biden’s candidacy for president, either personally or politically, if one wants to?

I think Joe Biden actually explains the answer to that question very well.

On MSNBC’s Morning Joe today, Mika Brzezinski asked Biden about how he fits into the Me Too movement, saying, “Are women to be believed unless it pertains to you?”

Look, women are to be believed [and] given the benefit of the doubt. If they come forward and say something that they said happened to them, they should start off with the presumption they’re telling the truth. Then you have to look at the circumstances and the facts.

Personally, this is how I’ve always thought of the meaning of “believe women”—not that it means we must, no matter the situation, believe every woman always, no matter what, but we need to believe women in the way that we have historically believed men, meaning we listen to them and start from a place of giving them the benefit of the doubt, rather than writing them off out of hand, as was the status quo before the Me Too movement. (Again, that’s just how I feel about the phrase. Others will feel differently. Despite what those trolls try to say, feminism, compassion, and our response to sexual harassment and assault is not a monolith.)

Maybe there are “inconsistencies” in Tara Reade’s allegations. But not only is that, honestly, common and in no way an indicator that the allegations are false, now that Biden has spoken out in his own defense, we can see that there are inconsistencies in his story, too. To “believe women” might just mean to give both of those things equal weight and not dismiss or slander a woman just because the man she’s talking about is powerful or has “good intentions” or because we’re scared that if we believe her and still vote for him it will make us bad feminists.

Maybe we just have to accept that the situation we’re in is complicated and messy. I don’t know what the other option is. I do believe that as we listen to Tara Reade, the least we can do is give her the courtesy of actually listening.