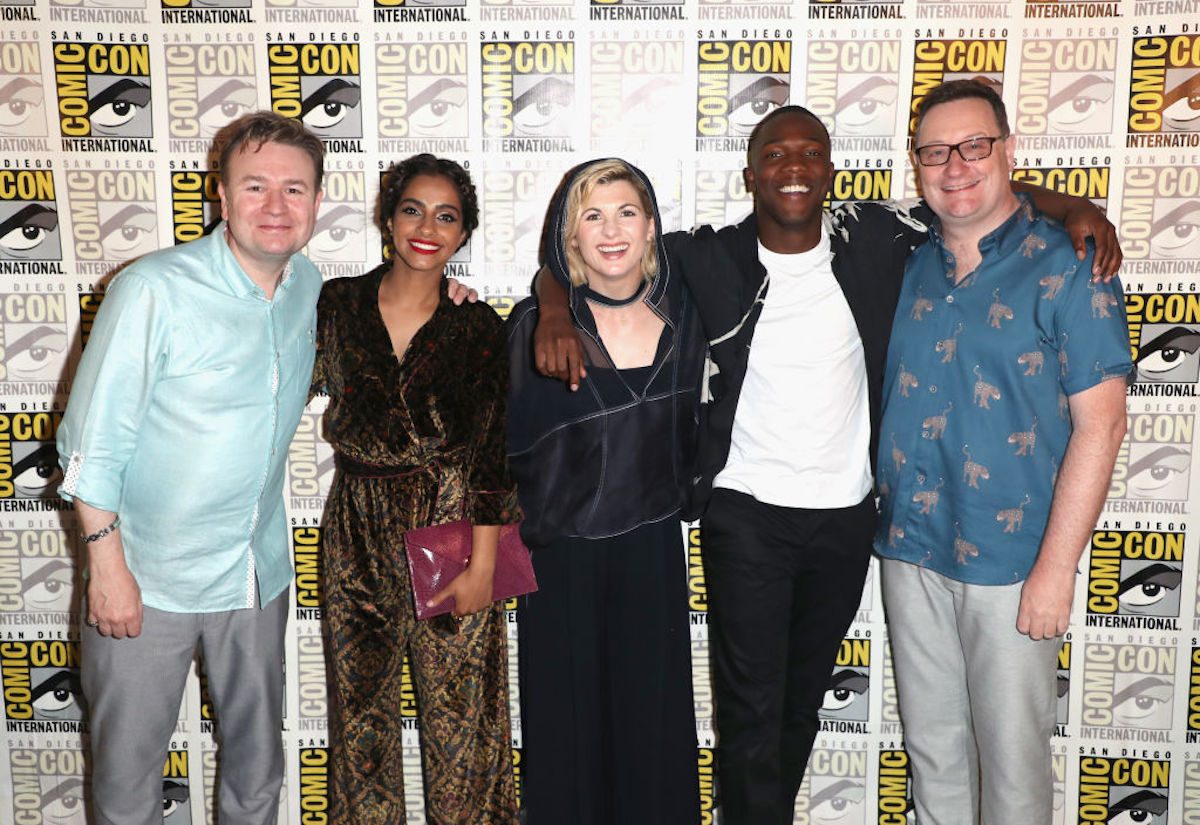 San Diego Comic-Con 2018 started out with a brilliant bang yesterday, as fans of Doctor Who filled the legendary Hall H for the much-anticipated introduction of Jodie Whittaker as the Thirteenth Doctor. Before the panel, where fans were treated to a new trailer and the reveal of the new sonic screw driver, the cast, including Whittaker, Tosin Cole (Ryan), Mandip Gill (Yasmin), along with showrunner Chris Chibnall and executive producer Matt Stevens, sat down for a press conference to discuss the first female Doctor and how this season is meant to be a reset, not just for the doctor, but perhaps even for the audience, both old and new.

There weren’t many spoilers—in fact, the cast laughed about whether they could even reveal if the TARDIS was in the new series (after getting a bit blown up)—but we did learn there will be a Christmas special. More importantly for me, everyone focused on how inclusivity is at the forefront of the show and the creators’ minds.

“It was obviously a nerve-wracking moment for the reveal, to see how that reaction would land,” Whittaker said when asked if she was nervous stepping into the role, “but I think actually … playing the Doctor is incredibly liberating—with this role, anyway; ask any of the previous Doctors, and the rules are out the window.” Because the Doctor regenerates, she can both bring in the new and touch on the old, which leaves Whittaker a huge area to play with.

Though fans and audiences are excited to see a female Doctor and know it’s something new, Chris Chibnall made sure to note that “The Doctor is still the Doctor.” Some gender issues may come up when she and her companions travel to the past, but the Doctor can still walk into a room and bend everyone to her will through force of personality alone. Even so, Whittaker felt like she was “thrown into the deep end” a bit on her first day of filming. Something that helped might have been her already iconic new costume, which was meant to be both practical and timeless. I have to say, the amount of cosplayers we saw dressed as Thirteen before she’s even been on TV only reinforced her impact.

As for the actual decision to finally cast a woman as the Doctor, “It felt really simple and obvious,” Chibnall said. “The world was ready, the show was ready, the fans were ready.” As he said (and we all agree), “It was a no brainer,” and it fit with canon: former showrunner Russel T. Davies apparently sent Chibnall a text noting a reference to changing genders during regeneration from the show’s ’70s incarnation. Chibnall noted that they had an “amazing list of actresses who could do this part,” and that they were lucky to get the best.

Whittaker isn’t the only new face bringing diversity to the screen, either. Mandip Gill will play Yasmin, also called Yaz, who she described as a 19-year-old girl “who asked for more and got more—so be careful what you ask for—and went along on this adventure and found this family.” Gill described Yaz as “completely in awe of the Doctor. Initially, if the doctor says, ‘Jump,’ she says, ‘How high?’”

Tosin Cole plays Ryan, who is a bit more “boisterous” than Yaz and much more prone to butt heads with the Doctor. Between the two, and Graham (Bradley Walsh), another companion who didn’t make it to SDCC, “It’s just this great dynamic between the three of them as friends, and the friends with the doctor,” said Gill, before adding, “We all bring something completely different.” 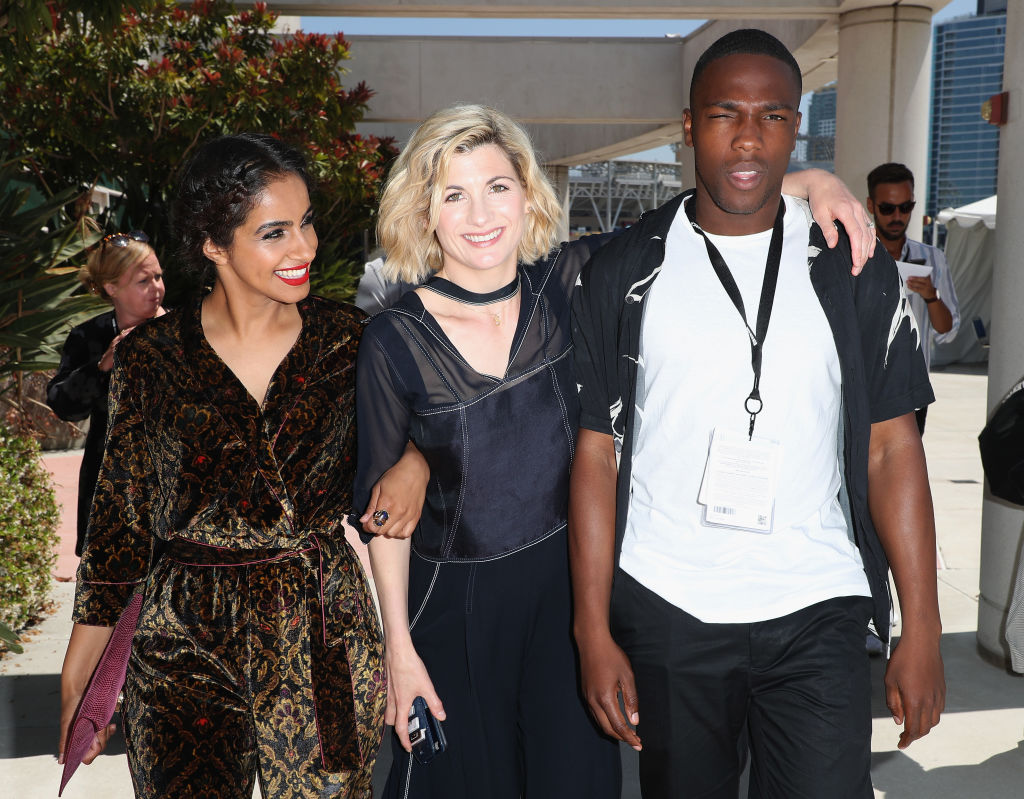 An entirely new cast, a new showrunner, and a new gender for the Doctor is a real invitation for new people to discover the show, according to the cast and creatives. “For the fans, for the Whovians, season 11 is absolutely going to be for them,” said Whittaker, but it’s also fresh and new and, “You don’t need the fifty year-odd history to go with it.”

Chibnall explained that this is a perfect time for all Doctor Who fans to encourage their friends to give the show a try for the first time, saying, “The first episode of a new doctor is always a great place to start, and I think this year even more so.” (And American audiences won’t even have to wait for the episode to come around to our time zone, as the August 31 premiere will be simulcast on the BBC and BBC America at the same time. Chibnall went on, “I hope it’s as inclusive, accessible, mainstream entertaining a version of Doctor Who we could make … and for people who love the show, who have seen every episode, it’s to give them a really concentrated hit of everything they love about Doctor Who.”

“As a girl born in the eighties, The Doctor did not look like me,” Whittaker noted. It matters that the Doctor is a woman, right now. Just as it matter that her friends aren’t all white, as well. “This is a show for everyone, but I think us three sitting here,” Whittaker said, gesturing to Cole and Gill, “didn’t always have people on television … that looked like us,” or even sounded like them, she added, jokingly referring to her and Gill’s Yorkshire accents.

“Your heroes don’t have to tick the same box.” However, Whittaker made sure to note she was playing the Doctor, not the Doctor as a woman. “I have never approached a role thinking of it ‘how would a woman play this?’ because I am one. I don’t know if a guy has gone: ‘How would a guy do this scene?’ You just are.” Whittaker went on to say, “My approach to this is coming from a very instinctive place, which feels genderless to me … There’s really no rules, and I’ve got two hearts, so I can do whatever I want!”

Diversity is also something that’s important to the creators offscreen. The producers have made a conscious effort to mirror the diversity onscreen with diversity behind the scenes, including writers of color, female guest writers, a mostly female editorial staff, and two female directors. Matt Stevens made a point to say they wanted to be as diverse behind the camera as in front of it, to which Tosin Cole added, “It’s 2018; everyone deserves to work. Get with the times and crack on.”

Chibnall added, “We’re doing lots, but I think across time, we need to do lots more.”

I’m personally very excited to see where this new Doctor takes us. Whittaker, Cole, and Gill are all bristling with personality (and also those Yorkshire accents that I can’t get enough of), and I’m so happy to see the Doctor finally using those Time Lord powers to reflect the present. As Chibnall said, “It should be the most inclusive show on television. The whole concept of Doctor Who is anyone can go anywhere.”