J.K. Simmons’ Super-Ripped Commissioner Gordon Will Have “a Badass Side” 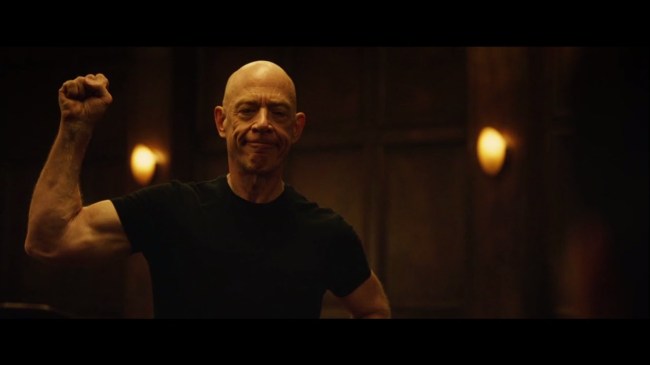 J.K. Simmons recently spoke to Entertainment Weekly about a bunch of his previous and upcoming movies from Kung-Fu Panda 3 to The Snowman. The actor mentioned he’s almost done with filming Justice League, which he calls “a fun experience, and knock wood, if it continues, then I’ll hopefully get to play Commissioner Gordon in a handful of movies.”

Simmons has said before that he’s avoiding movie versions of Commissioner Gordon, instead “learning as much as [he] can about him through the comics” to present his own take on the character. In case that image of a super-ripped Simmons lifting weights didn’t make it clear (get that man some tape because he is cut), the Gordon we’ll be seeing will be a badass who can hold his own next to Batman:

People of my generation remember Commissioner Gordon as this jolly, ineffectual Santa Claus type, and I think over the years in the comics there’s definitely much more of a badass side to him. One of the things that’s interesting to me is investigating hopefully a little bit more of that badass [side]…You’re living in a universe where it’s pretty tough to be a badass compared to somebody like Batman, but in the universe of non-superheroes I like the idea of Commissioner Gordon as a guy that can take care of himself, a guy that’s a real partner to Batman, not just a guy that turns on the bat signal and goes, ‘Help! Help, Batman!’

On the wide circulation of his gym picture, Simmons said he found it flattering.

I’m not going to lie, the inner 12-year-old is very gratified. I feel like — this is a reference that only the 60-year-olds are going to get — but on Leave It To Beaver, Beaver’s big brother would often be in his bedroom by himself flexing his arms in the mirror and Beaver would walk in and bust him, and so I’m glad that the photos of me seven or eight years ago when I weighed 250 pounds were not circulated as widely as those photos.

While I trust I’ll probably enjoy J.K. Simmons in any role, I hope that “badass” doesn’t mean “excessively gritty.” Are you looking forward to seeing Simmons’ take on Commissioner Gordon?