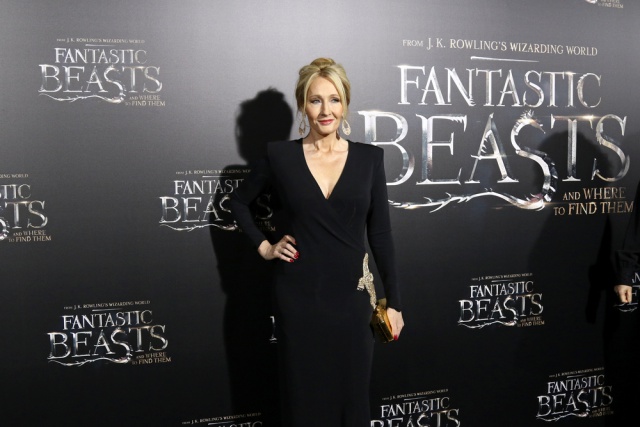 Previously, I spoke about my very strong feelings about Johnny Depp being cast in the Fantastic Beats franchise, and why I think he doesn’t belong there. It’s a divisive issue, and I accept that it will continue to be.

This past weekend I spoke to one of my favorite people ever, who is still a Johnny Depp fan. We had a conversation about it, and what it came down to for me is that if Johnny Depp apologized, or was held accountable for his behavior, maybe I would have different feelings about him. There is room for growth, but as far as Depp is concerned there is no growth. Even more disturbing than Depp’s lack of moral accountability for me is the dismissal of his ex Amber Heard and her experience because she isn’t “likable.”

Likeability does not equal whether or not you have valid victimhood. We are seeing a climate where women are coming forward and exposing, once again, how difficult it can be to come forward. When people talk about domestic abuse victims, the question is always: Why didn’t she leave? Why didn’t she say something?

Variety.com has a timeline of the entire Amber Heard/Johnny Depp relationship. People and Refinery 29 accounts are filled with links that show there are court documents proving Heard’s case. Still, people use the brevity of their marriage, Heard’s lack of relative fame in comparison to Depp, and her sexuality as a way to shame her. Even Depp’s statement via a rep played up his victimhood and make it seem like eh, marriage too short no one cares:

“Given the brevity of this marriage and the most recent and tragic loss of his mother, Johnny will not respond to any of the salacious false stories, gossip, misinformation and lies about his personal life. Hopefully the dissolution of this short marriage will be resolved quickly.”

Meanwhile, Heard giving her entire seven million settlement to charity, meant nothing because her character is called into question constantly.

Now, in addition to Fantastic Beasts 2 director David Yates’ tone-deaf comments, J.K.Rowling has made a statement about Depp’s casting on her website. 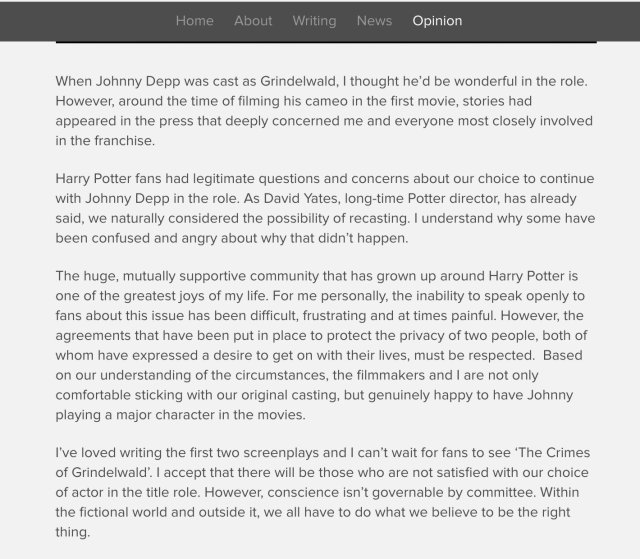 Now, if Rowling is a friend of Depp and has complex feelings about her friend, she is entitled to them, but Sarah Silverman still managed to deliver a powerful monologue that addressed the fact that she believed women and Louis C.K. was her friend, but he fucked up. Why is that type of comment so hard for others?

Depp’s actions are public, the images of Heard’s bruises are public, what private knowledge does J.K. Rowling have that makes her believe that her “understanding of the circumstances” gives Depp a pass and that we should all be okay with her genuine happiness to have “Johnny” play a character?

Because it seems like she—like sadly many others—just must simply believe Depp over Heard, and that is very disappointing. It is disappointing because the Harry Potter series have always been books that tried, at their core, to be progressive and have given birth to one of the biggest feminist icons in Hermione Granger (and her live-action counterpart Emma Watson). Further, the series explores the nature of abuse that many characters suffer at the hands of family and authority figures.

Everything about what is happening with Depp’s casting seems to the opposite of the morals and ethical standards of the books and the writer behind them. Even now when I look at the statement, I am just really confused as it what Rowling means. Especially the lines in the last paragraph: “I accept that there will be those who are not satisfied with our choice of actor in the title role. However, conscience isn’t governable by committee.”

This isn’t about being satisfied with a choice because I fan-cast Grindelwald as Richard Armitage or that I’m angry because I don’t ship Ron/Hermione. When one of the major leads of your massive, supposedly family-friendly film has been accused of beating his wife and there are photos, texts, etc. that prove that, you cannot just handwave that off because it was “only one time” or because you like him more than his wife. It is a disappointing statement from a woman and an author I have deeply respected and admired for most of my life.

And the responsibility is on the creatives. While there are those who separate art from the artists, for me, it really depends, and when it comes to Depp, his lack of remorse and smokescreen attacks on Heard’s character makes me think that as long as his friends in Hollywood continue to turn a blind eye, he will never have a reason to do better or be better.

As a Harry Potter fan, it sucks that I won’t be able to enjoy this film, but even with my MoviePass, I have no interest in supporting Depp in a project. I’m sure the film will do well regardless of those who do pass on it, but at least we are saying loudly and clearly that our conscience isn’t governable by committee.