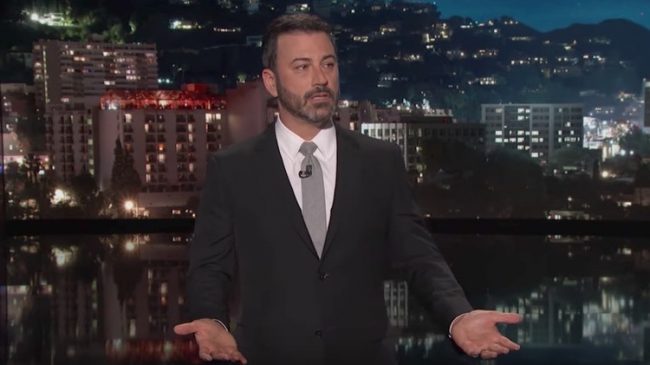 Jimmy Kimmel hasn’t always been the most political of late-night television hosts. He used to be much closer to the Jimmy Fallon camp of polite, middle-of-the-road comedy. That began to change after Trump was elected, and especially after Kimmel’s son was born with heart disease earlier this year, and he began using his show as a platform to discuss the state of American health care. In the lead-up to the potentially devastating (and, thankfully, eventually abandoned) Graham-Cassidy bill, he became an unexpected source of important information, dedicating large portions of his show to fact-checking the BS coming out of the GOP.

Thanks to all who stood up and spoke out from this happy guy and his less-fortunate friends #GoodbyeGrahamCassidy pic.twitter.com/8QyavZElxu

Now, street “artist” Sabo is mocking Kimmel in a series of posters put up around Hollywood. Most of the images are styled as ads for “The Jimmy Kimmel Estrogen Hour,” with others recreating Johnny Depp’s movie Cry Baby.

This comes after Kimmel has teared up a number of times, both in discussing his son’s health, as well as the mass shooting in Las Vegas. This, apparently, is grounds to attack Kimmel’s masculinity, because to people like Sabo, emotions = femininity. (And femininity is grounds for mockery.) Some of the images parody The Man Show, which Kimmel left behind nearly a decade and a half ago. But not everyone grows out of that sort of fragile peacocking. For some, still, the worst insult you can throw at a man is the word “estrogen.”

Sabo told The Hollywood Reporter, “We allow Jimmy Kimmel into our homes because at one point we considered him to be entertaining. Now he’s nothing more than a talking head for the Democrat party.” Fun tip for Sabo, you have the power not to allow Kimmel into your home. It’s called not watching his show. If you don’t want to hear someone’s opinion, you don’t have to watch. And if you can’t handle someone showing emotion over a major tragedy without mocking them, I’m pretty sure your viewership will be missed by exactly no one.

As for Jimmy Kimmel, he was asked for a response and sent the following picture, along with the message, “I encourage all fellow cry babies to support Everytown for Gun Safety – everytown.org.”

I think that picture sums up everything we think about this.