Westworld‘s Jimmi Simpson Can’t Tell Us Anything About Man in Black Fan Theories…Can He?

But we don't actually want him to, do we? 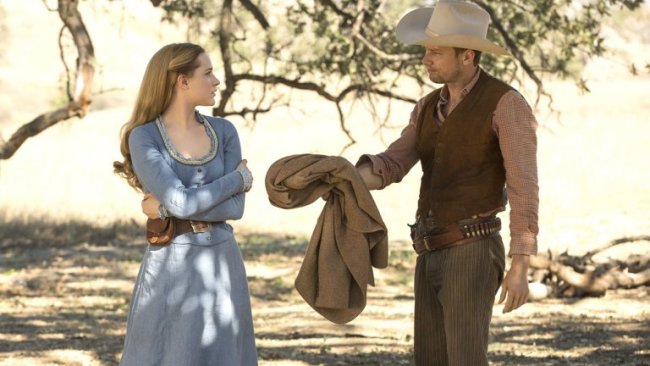 Westworld is only four episodes deep and there are already myriad theories about the identity of The Man in Black, played by Ed Harris. One of them is that current “white hat,” William is The Man in Black in an earlier time. Well, the actor who plays him, Jimmi Simpson (A.K.A. Young Christian Slater), obviously can’t spoil the goings-on on the HBO hit, but that doesn’t mean that we can’t try and figure out some clues based on what he can say, right?

In an interview with The Hollywood Reporter, Simpson was asked about whether he’s seen the theories about William being The Man in Black floating around the internet (of course he has!), and what he feels about that. Simpson replied, “First of all, I’m just flattered, because that man is so badass. (Laughs.) Second of all, I can’t comment on anything. I wish I could say how wrong or right you are, but you guys have to wait just like we did.”

And they really did need to wait, as each cinematic episode of this show apparently took a month to shoot since the cast received new scripts monthly. Simpson wants the audience to have as much fun speculating as he and the rest of the cast did. “Bring it on,” he says. “Because we literally all did this every time we got a script: “Oh my god! This is happening! She’s this, and she’s not this!” Then we were generally wrong, but sometimes, we were a shade right, and you would feel like a genius for somehow figuring out Jonah and Lisa’s brilliant puzzle.”

Simpson explains that his character comes from very little means, and has worked to get a certain position at a company. “[William]’s uncomfortable with complete exercise of his id, or the feeling that he’s entitled to anything,” he says. “A situation like [Westworld] is something he would never choose. He’s brought in there by his fiancee’s brother and boss’ son — both of those people are Logan. It’s sort of a vetting of William, to see if he fits into the family. That’s why he has less of an agenda than almost any other guest, who’s there to f—k or fight or do whatever. He’s pulled into a situation he did not choose. He’s not going about it the typical way. He’s there, and he doesn’t want to shoot things. Because he’s there unwillingly, he’s a little bit more observant. His journey is about having those expectations removed, and therefore, anything can happen.”

THR talks to Simpson about this week’s episode, “Dissonance Theory,” in which William ends up following Logan on a more dangerous mission. He explains why William agrees to go along saying, “William’s there to open up his world. He’s certainly not there to turn into an asshole. And the end of four, it’s not like Logan is saying, ‘We’re going to go f—k shit up.’ It’s, ‘We’re going in this direction.’ William is going to be part of the experience, but he’s also going there to protect Dolores. It’s not that William has agreed to go and be a dick. He’s agreed to go on this new direction of a place, and meet Slim’s boss. It’s more of an acquiescence: ‘Ugh, fine,’ than him saying, ‘Alright, I’m going to go black hat.'”

But who knows how long that will last? Do you think William is The Man in Black?