A tale of two TV boyfriends.

This article originally appeared on A Love So True and has been reproduced here with permission.

A few weeks ago, I attended a birthday party with a very specific theme: The “Casino Night” episode from season two of The Office (U.S. version). It was a lot of fun. It was held inside an apartment in the Northwest rather than a warehouse in Scranton, but that didn’t really matter. There were soft pretzels “because Stanley loves Pretzel Day.” The songs on the playlist were all connected to the show somehow. At one point, the host decided to play the episode of honor on Netflix, albeit on mute. I stood with a few others in the living room, watching as Jim silently confessed his love to Pam. 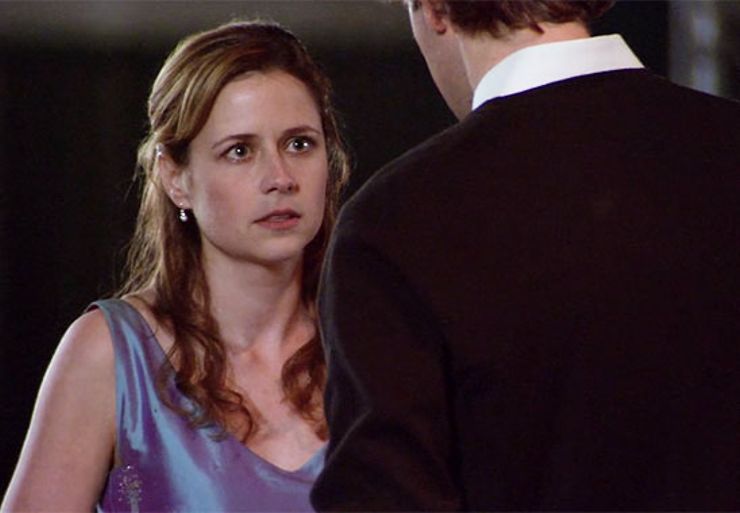 When I got home, I decided to watch the episode with sound. I wanted to know if it still held up in 2017, 11 years after it aired. The answer is yes, yes it does. The writing, acting, and everything are all there. But the overall effect is not quite the same, and I blame myself and the passage of time.

Related: 12 of the Greatest TV Couples Ever

When I was 21 or 22, someone like Jim was my dream guy. All those pranks he pulled on Dwight were hilarious, and it seemed clear he adored Pam and would love her forever, even if they hadn’t quite figured out how that would happen yet. 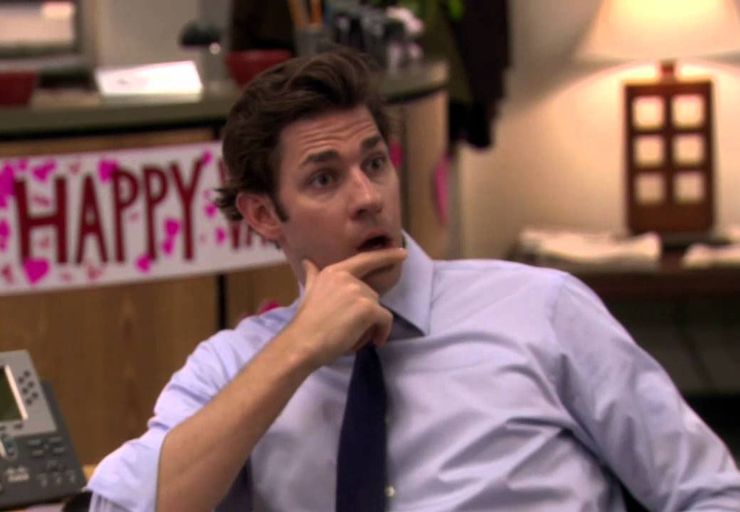 Now that I’m 33, though, Jim’s too-cool-for-school attitude is grating. He hates his job and feels like he’s too good for it, which is fine, but he doesn’t do anything about it until after Pam rejects him. His pranks on Dwight can still be funny, but you wonder why he can’t put that much effort into his actual, you know, job.

Pam and Jim end up back in the same office after the branch merger, and some of the same patterns repeat, until finally, finally, they get together for good. Instead of maturing after he gets married and becomes a parent, though, Jim gets even worse. Without consulting Pam, he makes major decisions that will impact her, such as buying a house and investing money in his new company. In season nine in particular, he fails to communicate well with Pam about his part-time work in Philadelphia with the athletic company he founded, and the impact that his new responsibilities have on the family.

I’m not the only one in my friend group who noticed that, as the series progresses, Jim seems less and less like an ideal romantic partner. I had coffee with a friend recently, and when I mentioned Jim Halpert, she called him a name I probably can’t print here.

Contrast that with another seminal TV couple of my generation: Leslie Knope and Ben Wyatt of Parks and Recreation have their crap figured out a lot sooner. They also got together when they were well into their 30s, and maybe that makes a difference.

In my 20s, I expected relationships to be dramatic and uncertain. In my 30s, I want a guy who knows what he wants and doesn’t make excuses.

Related: 15 of the Best First Kiss Moments on TV

As an example, let’s take the Parks and Recreationepisode “Road Trip,” which roughly correlates with “Casino Night” in terms of plot. Ben and Leslie must go on a road trip together to Indianapolis, and Leslie is nervous about it, because if they get together, they could both lose their jobs. She hilariously tries to do everything possible to dial down the sexual tension.

Amy Poehler’s line reading of “I’m allergic to fingers” makes me laugh even harder on repeat viewings. Does Ben give up, though? He does not. Instead he openly flirts with her over dinner, then confesses: “I’m sorry, and I know we can get into trouble, but I can’t take this anymore, and I feel like we have to at least talk about it. I mean, it’s not just me, right?” A stunned Leslie tells him, “No, it’s not just you.” 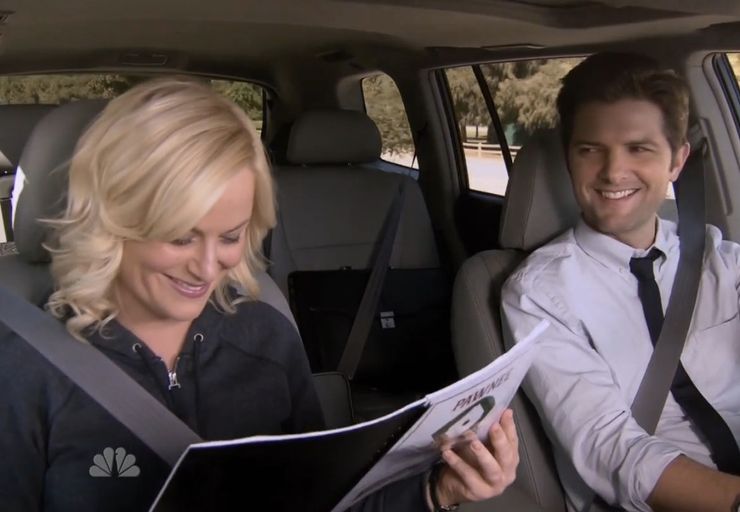 That’s not as dramatic as Jim opening with “I’m in love with you,” but it’s still effective. Rather than deny that the feelings are mutual, Leslie confirms them. There’s no “I’m really sorry if you misinterpreted things.” Leslie even calls Ann and declares, “He told me he liked me, and I’m going to go make out with him now. On his face.” It takes a bit longer for the two of them to finally lock lips, but when they do, it’s romantic without being quite as tortured.

At 23, if a guy like Jim told me he loved me, I’d probably swoon. At 33, I’d probably shake my head and say, “No, no. See, what you’re really in love with is the idea of me.” Jim knew Pam as a friend, but also as the unattainable receptionist. I sympathize, Jim. I really do. But wanting people you can’t have gets old fast, as does running away to Connecticut after they reject you, which is what Jim does in the show’s third season.

I know Parks and Rec and The Office are two very different shows with very different goals, even though they shared some of the same personnel. It’s fair to suggest that maybe The Office wasn’t trying to present Jim and Pam as some sort of romantic ideal, although the show did go all in on the most romantic moments. By later seasons, though, it’s hard to tell if Jim even likes his wife and kids. 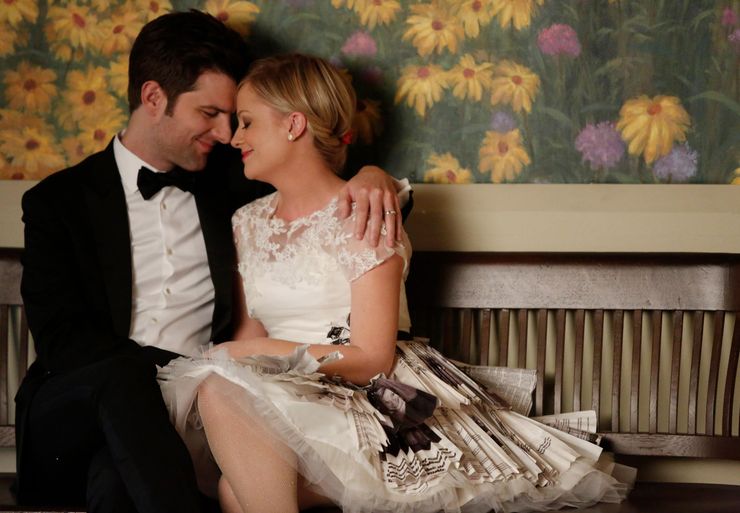 Leslie and Ben must fight a bureaucracy that says it’s inappropriate for them to be together. That feels real, and it gives us the delightful “Trial of Leslie Knope” episode. There are other obstacles along the way, but overcoming those generally doesn’t involve hurting as many people as it does on The Office.

Related: “It’s All About Love”: How Romance Author Sandra Kitt Found Her Story

Jim uses other women as a placeholder when he really wants Pam. That’s frustrating, even though most of us have done something like that at one point or another. He doesn’t, however, need to be so cruel to those placeholders. The abrupt ditching of Karen to finally get with Pam is the biggest example, but he’s also a real jerk to Katy in “Booze Cruise.” He punishes women for not being Pam.

Not that Ben Wyatt is a perfect human. Just ask the citizens of Partridge, Minnesota. But by the end of the show, it’s clear that he and Leslie have always been a team. “I just want to think about how perfect my life is right now,” Leslie says in the middle of Ben’s proposal to her. It’s a credit to the show that you believe her.