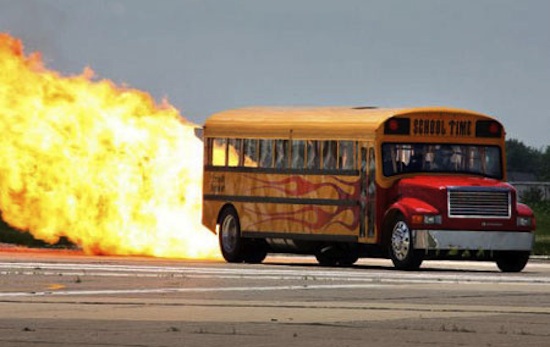 When an Indianapolis-based band of vehicle modders called Indy Boys Inc fitted the engine from a Phantom fighter jet onto a trusty yellow school bus, the “School Time Jet-Powered School Bus” was born. Capable of clocking speeds up to 367 miles per hour, the bus’ creators describe it as more like an aircraft than a bus, with a 42,000 horsepower engine that burns 150 gallons of fuel in just a quarter mile, leaving a spectacularly awesome 80-foot trail of flames in its wake. Truth be told, it is probably not very eco-friendly.

But why? Well, because it is sweet, and also to keep kids off drugs:

“I built the bus for two reasons. The first is to entertain people because, come on, it’s a jet bus,” [mechanic Paul] Stender said, concluding, “The second, is to keep kids off drugs. Jets are hot, drugs are not.”

Look in wonder upon the video below: