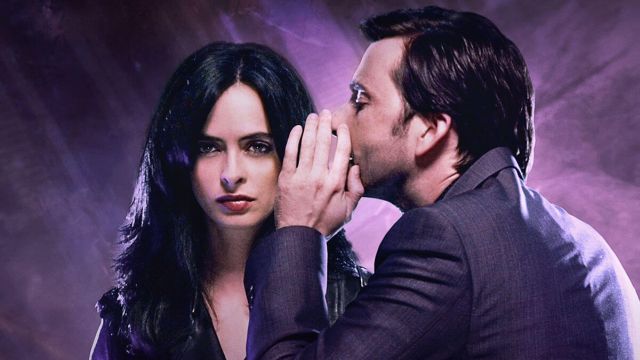 Jessica Jones might’ve thought she did away with Kilgrave in the season 1 finale, but every comic book fan knows that you can’t keep your worst nemesis down.

David Tennant’s turn as Kilgrave, a.k.a. the Purple Man, was one of the most terrifying and effective villainous turns I’ve ever seen: Tennant has both the slick charm and the oily menace to pull off the abusive, conniving, manipulative mind-controlling character. And since Kilgrave burrowed so deeply into Jessica’s subconscious, it appears that even his neck-snapped death at Jessica’s hands isn’t stopping him from sticking around to haunt our heroine.

Entertainment Weekly has a first look at Jessica Jones season 2, which appears to be even darker than the first season’s considerably dark run. Jessica Jones is my favorite of the Marvel/Netflix collaborations so far, but getting through the season wasn’t always easy, and sometimes I had to pause in binge-watching and just take some time to breathe. Jessica isn’t your traditional superhero or traditional sympathetic lead, and the audience is drawn into her bleak life with her. It’s like plunging underwater into an ocean of despair.

Suffering PTSD from Kilgrave’s first takeover of her life, brain, and bodily autonomy, the Jessica we meet is angry, sarcastic, cynical, frightened, sunk into alcohol as an escape, and hardly gung-ho about saving the city, no matter what special strengths she’s gifted with. I think bringing back Kilgrave in some form makes a lot of sense: people who suffer from trauma aren’t miraculously cured if the cause of that trauma is removed.

Far too often, trauma stays with you, and it looks like Jessica Jones will be exploring this concept quite literally. Showrunner Melissa Rosenberg explained the decision to have Kilgrave return: “He’s such a part of her construction and her dilemma. I think just having him come back and be that mirror again is really important.” 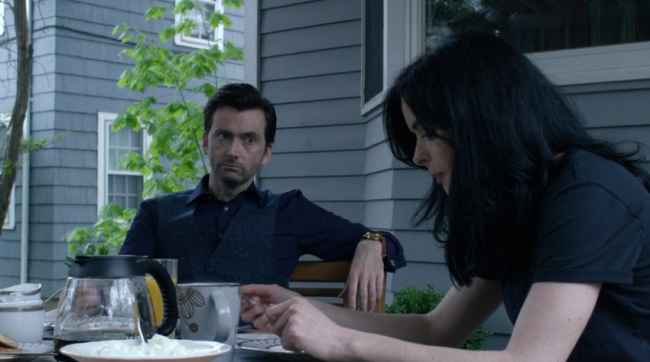 And it seems like the rapport between star Krysten Ritter and Tennant remains—their chemistry is part of what makes the interactions between Jessica and Kilgrave all the more disturbing. “Having David back on set was amazing,” Ritter told EW. “We had such a great run the first season, and it felt like a celebration, having him back. The content is maybe not much of a celebration [laughs], but having him be present and spending time with him on a personal level kind of felt like one.”

As for how Jessica’s life has changed since the events of season 1 and The Defenders, Ritter explained, with perhaps a touch of shade on Netflix’s lukewarm superhero team-up, “I think Jessica is in a pretty dark headspace when we meet her at the top of season 2. The Defenders took place over the course of, like, a minute — well, it was a week long — so that was like a blip in time, and we didn’t focus too much on it.”

In describing the second season—and a hint that we might also get to see more of Jessica’s past, either before or with Kilgrave, Ritter said, “I think what we can say is that what we’ve done again is kept the story very personal. If season 1 was in her head and in her mind, then season 2 will be more in her heart. This season is more emotional.” More emotional?! I think I’m going to need to take a lot of breaks while watching.

Then EW asked a great question about how much Jessica Jones‘ themes are finding particular relevance today:

Now, this season was written and filmed before the deluge of headlines about sexual harassment. Jessica Jones is a show that deals heavily with sexual abuse and trauma, so how have you thought about the series’ relevance at this point, and about how the industry can be a safer space for women?

ROSENBERG: Well, we were ahead of the curve, you know? It’s just the nature of our show. A woman is starring in it, a woman is running it, and it’s a way of facilitating change.

RITTER: Yeah, I mean, we already felt like we were doing that. We have a really unique situation where our show is all women, the main character’s a woman, it’s written by a woman, and even when the crew comes in, they always make comments about how different our energy is on set… There’s a real, feminine power to our show that is noticeable, I think.

A deeper, more emotional, even darker headspace Jessica Jones created and dominated by feminine power? And also occasionally David Tennant drops by to scare the hell out of everyone? Season 2 can’t come soon enough.

Not to mention that Oscar-nominated actress Janet McTeer, who is the most captivating actor I’ve ever had the pleasure to witness live in a theater, has been cast as a mysterious character “who will have an enormous impact on Jessica’s life.” All of what we’re promised above, plus Janet McTeer? Why is Netflix even bothering with any other superhero stories besides this?

(via EW—click through to see a first look at Jessica and Kilgrave in S2, image: Netflix)