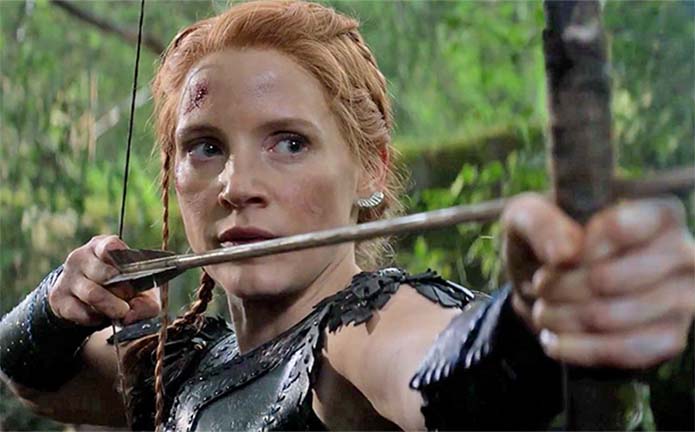 Jessica Chastain and her fellow sexists (getting that in before you can, boys) seem to be having a great time on the Prague set of The Zookeeper’s Wife, where Chastain is currently working with “way more” women than she’s ever collaborated with before on a film production (a pretty depressing statement in context, considering the crew is still roughly 80% men and only 20% women).

But Chastain says the experience has still been transformative, writing in an essay for The Hollywood Reporter that she and the other female members of the Zookeeper’s Wife team are “giddy with happiness:”

The energy is great, you all are working together as a community, and everyone is participating in the exchange of ideas. You don’t feel a hierarchy; you don’t have anyone feeling like they are being left out or bullied or humiliated. Sometimes being the only girl on a set, you can feel like a sexual object.

I was talking to other actors about this recently, and the wonderful thing about having so many women on set is there hasn’t been anyone who has screamed or anything like that. It’s a very collaborative experience, and it’s been heaven for me. We all hang out all the time — there are no strange power plays or egos. We know how rare making this kind of film is. We’re giddy with happiness.

I don’t think it’s a fluke. If you look at the people who put the film together, it’s a lot of women who have had a difficult time in the industry, so of course they are going to want to be on a set where they aren’t the token woman, where there are more voices. And I’m positive that just comes from the women in the power positions making room for other women. Of course, Niki and producers Diane and Kim are not going to think it would be strange to hire a woman — I’m sure that probably helped matters.

Chastain also individually applauds many of the film’s female creators, some of whom, such as stunt coordinator Antje Rau, are performing jobs that Hollywood tacitly considers women to be unsuited for:

The actress, who has spoken up in the past about Hollywood’s gender wage gap, also recounts some of the soft sexism she’s experienced on past sets:

There are so many men out there who are the most sensitive, beautiful and supportive people ever. But I’ve been on sets a couple of times where I’ve noticed that if I have an idea about a scene, I have to go through the male actors to be heard. It’s really annoying. The male actor will have a better relationship with the male director, so I have to get the actor on my side. That’s the only thing that sometimes feels very icky.

Many times a movie gets tested before it sees the light of day, and I’ve starred in movies that test much better with women than they do with men. But the problem with that is the majority of critics are men, so those movies that test really high for women are then having men critique them. And it means we need more female critics — we need to level the playing field here.

The essay, which originally appeared in The Hollywood Reporter’s inexcusably white “Women in Entertainment” issue, is definitely worth a full read, and I would love to see THR publish a similar piece from a woman of color. Much of the sexism Chastain describes experiencing on set might be invisible to her male collaborators, and I’m sure actors of color experience similar micro-aggressions every day in Hollywood, in addition to blatant racism.

What do you think of the essay, gang?