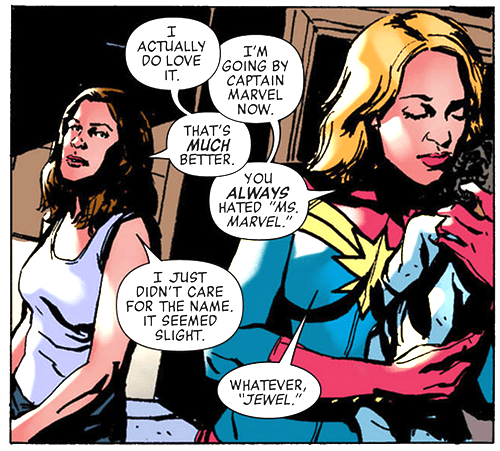 Possible spoilers for Jessica Jones to follow (provided you haven’t already finished the series, of course).

During an interview with IGN, showrunner Melissa Rosenberg reminded fans that, when Jessica Jones was in its very earliest iterations as a show for ABC, Captain Marvel‘s Carol Danvers was originally set to play a role:

Back when it was at ABC Network, I did use Carol Danvers. But between then and when it ended up on Netflix, you know, the MCU shifted, and it also shifted away from the universe in the [comic] book. So in the book, the powers are very out in the open and the themes of that are about ‘the other,’ and in the cinematic universe that’s not the mythology. So there was a lot that I had to move away from, just in terms of sheer plot, and Carol Danvers got her own movie.

In Carol’s place, we instead got the awesome Patsy “Trish” Walker, aka Hellcat! Rosenberg explained,

Patsy Walker ended up being an incredibly—a much more appropriate fit with Jessica. It was better that her best friend was not someone with powers. It actually ends up being a really great mirror for her.

As impatient as I am to see Carol on-screen already, I’m excited that Trish has been getting her due lately, both in a new series written by Kate Leth, and in Netflix’s Jessica Jones. Trish also offers a perfect counterpoint to Jessica’s character in the new series, and makes me optimistic for the future of female superheroes in the MCU. Friend of The Mary Sue Susana Polo writes over at Polygon,

A few episodes into Jessica Jones it’s revealed that after Jessica’s attempts to become a superhero failed, Trish decided that even if she doesn’t have superpowers like her foster sister, there’s no reason she can’t be a superhero. She’s training. She’s equipping herself. She’s preparing for war. And she’s not doing it because she has a traumatic past — although her childhood wasn’t exactly sunshine and rainbows, we find out later — she’s doing it because people need to be helped, because good things need to be done, and because there’s no reason why it can’t be her doing the helping and the things.

The addition of Walker takes some of the burden of representation off Jessica Jones, which, as Marvel’s first-ever female superhero show (although you’re always super in my mind, Peggy Carter) might otherwise been pressured to be all things to all women. By including Walker, Jessica Jones hints at a wider universe of heroic women and also allows Jessica’s story the freedom to be the story of an individual character, rather than representative of all of the female heroes unsung so far in the MCU. Considering how dark and potentially controversial Jessica’s backstory is, that was a very smart move.

What do you think, gang? Are you loving the show so far?