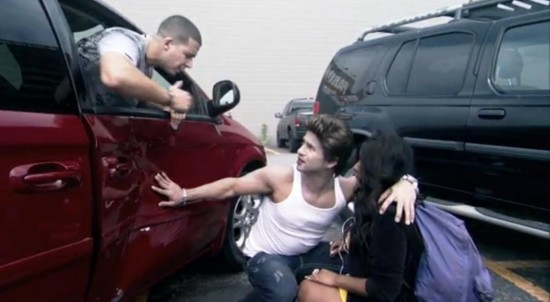 There’s something odd about when the Jersey Shore cast parodies something. Take the Twilight video that aired last night on Jimmy Kimmel Live (found below), for example. They’re not really making fun of Twilight at all, they’re just making fun of themselves in the context of vampire teen drama.

With Snooki as Bella, The Situation as Edward, and Pauly D as Jacob, this star-studded cast makes for a really, uh, interesting (?), adaptation of the teen blood-sucking sensation. While he barely does anything, the best vampire of the bunch is definitely Ronnie. Even though he physically looks just like how I imagine Fenrir Greyback, he gets the sinister fanged look perfectly.

Like the people over at ArtsBeat Blog of the New York Times, we can’t really form an opinion on this video. It’s kind of funny, but really just makes an embarrassment of all things Jersey Shore and Twilight. On the other hand, that’s really not a bad thing to do.