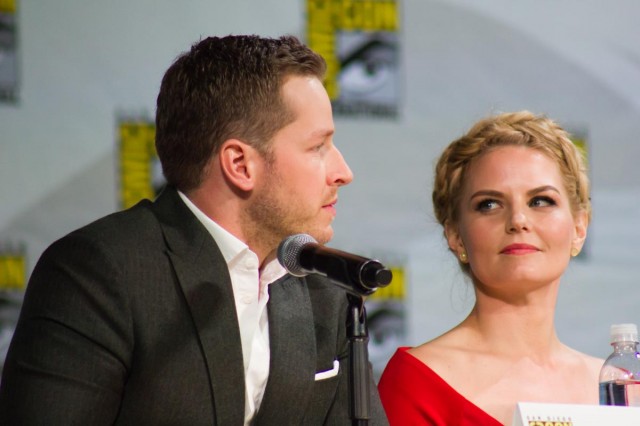 With Once Upon a Time Season 4 premiering on ABC tonight, and a few more Disney women making their debut by way of Frozen, we hear from stars Jennifer Morrison (Emma) and Josh Dallas (David/Prince Charming) on the cast already filled with dynamic women.

In roundtable interviews at San Diego Comic-Con this summer, The Mary Sue spoke with the cast of Once Upon a Time and specifically asked Morrison for her take on the women of the show. Particular considering the ensemble features so many women, not the norm on television these days. She told us:

That’s a credit to Eddy [EP’s Edward Kitsis] and Adam [Horowitz]. I think that they do an incredible job of writing very complicated women and when I say complicated, I think I really just mean real. You know, there are women who are strong and who are independent and know what they want and know how to take care of themselves but at the same time can be vulnerable and have things that they need and want to love and be close to people. So you know, oftentimes you get one or the other and you don’t necessarily get all of that together. And Eddy and Adam have done a wonderful job of doing that with several female characters on the show. And now they’ve also done a wonderful job of complimenting that with really strong men around them as well, so it’s a nice balance. It’s definitely been something that we’ve all enjoyed playing with on set and we’ve always appreciated.

Dallas chimed in with his own opinion on female relationships when the topic of Frozen, much publicized to be getting adapted on Once this season, was broached.

I loved it as a movie. I love the story. I love that it was a story of – it’s a love story but it’s a love story between two sisters. I think that’s a beautiful thing. It’s powerful women, strong women, which is what Once Upon a Time is all about, which I think it’s great. It seems like such a natural fit for Once Upon a Time and of course we’ll do it in our own special Once Upon a Time style and where they kind of change it up a little bit and they fit those characters in our world and they mingle and play with our characters. Can’t wait!

So are you looking forward to tonight?

Previously in Once Upon a Time