We are ready for the Garneissance!

When the trailer for Peppermint dropped today, all I could think was finally! After a long hiatus from action projects, Jennifer Garner is back and ready to kick some ass in her own John Wick-style revenge vehicle. The only question is, what took Hollywood so long to give this woman the role she deserves? The answer is: poor timing and Ben Affleck.

When J.J. Abrams spy series Alias wrapped in 2006, Jennifer Garner was poised to be an action superstar. Garner had come seemingly out of nowhere when she took on her breakout role as Sydney Bristow in the beloved spy series, and her performance garnered accolades (including a Golden Globe) and a fierce fan base. Her scene-stealing performance as Elektra in Daredevil (2003) showed she had the chops to lead a film of her own. In 2004 she headlined her first film, the comedy 13 Going on 30, which proved to be a critical and financial success. Jennifer Garner was officially a movie star. So what happened next?

2005’s Elektra solo film tanked, but it was hardly Garner’s fault (she was contractually obligated to do the film). Elektra had the bad timing to come out just three years before Iron Man, which launched the Marvel Cinematic Universe and changed the way comic book films were made. In that time, geek culture has taken pop culture by storm, with a proliferation of comic book-based films and television series that shows no signs of slowing down. The studios’ response to the unsuccessful Elektra and Catwoman standalone films brought female-led comic book adaptations to a standstill, which lasted until 2017 with the undeniable success of Wonder Woman.

In the meantime, Garner put her career on the back burner. She married her Daredevil co-star Ben Affleck in 2005 and subsequently gave birth to two daughters and a son. Although she would sporadically appear in films after she had children, they were usually smaller “mom” roles in family films like Alexander and the Terrible, Horrible, No Good, Very Bad Day and The Odd Life of Timothy Green. Garner would also pop up in acclaimed indie films like Juno and Dallas Buyers Club.

Garner taking time off to have and raise her children is a completely understandable and valid choice. Considering the lack of compelling and nuanced roles for women in Hollywood, who could blame her? During this time, Affleck reached new career heights, including starring in and directing the Oscar-winning Argo in 2012.

In 2015, a messy public split with Ben Affleck dominated the tabloids, as rumors of his alleged cheating ran rampant. Though there were talks of a reconciliation, Garner filed for divorce in 2017. Now, the 46 year old Garner is stepping back in the spotlight with the action thriller Peppermint, directed by Pierre Morel (Taken). The official synopsis of the film reads:

Peppermint is an action thriller which tells the story of young mother Riley North (Garner) who awakens from a coma after her husband and daughter are killed in a brutal attack on the family. When the system frustratingly shields the murderers from justice, Riley sets out to transform herself from citizen to urban guerilla. Channeling her frustration into personal motivation, she spends years in hiding honing her mind, body and spirit to become an unstoppable force – eluding the underworld, the LAPD and the FBI- as she methodically delivers her personal brand of justice.

Jennifer Garner as a female Punisher? Shut up and take my money! Hopefully this will be a welcome return to form for the actress. It’s high time women got their own revenge thrillers like John Wick and Taken. Last month saw Gabrielle Union’s home invasion thriller Breaking In gross $38 million off a $6 million budget. Here’s hoping that Peppermint proves to be a worthy second act for Jennifer Garner. She certainly deserves it. 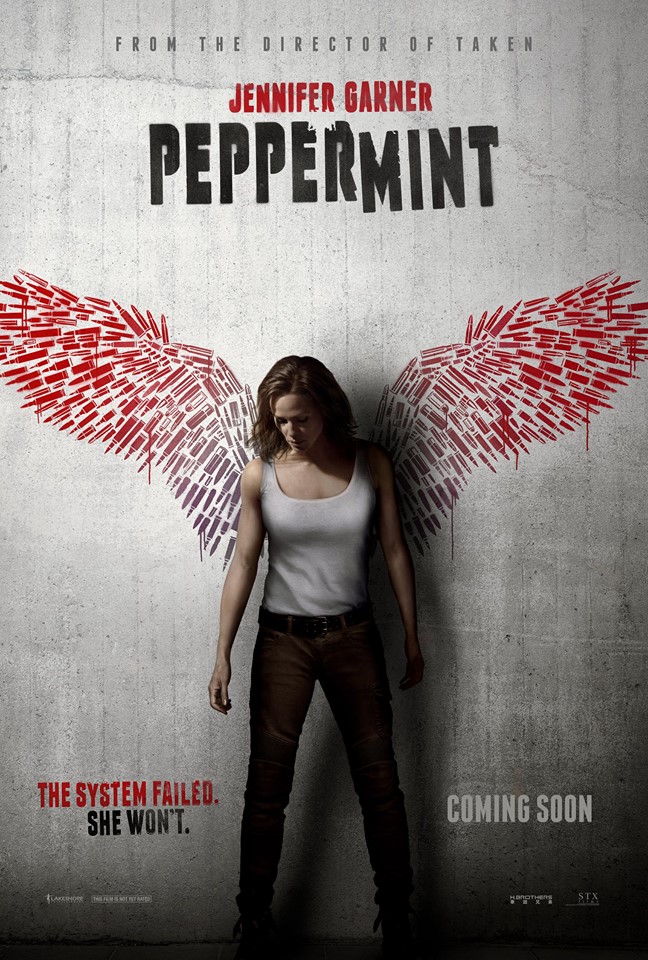