People‘s Jennifer Garner Cover Story Not Only BS, But Sexist and Ageist as Hell 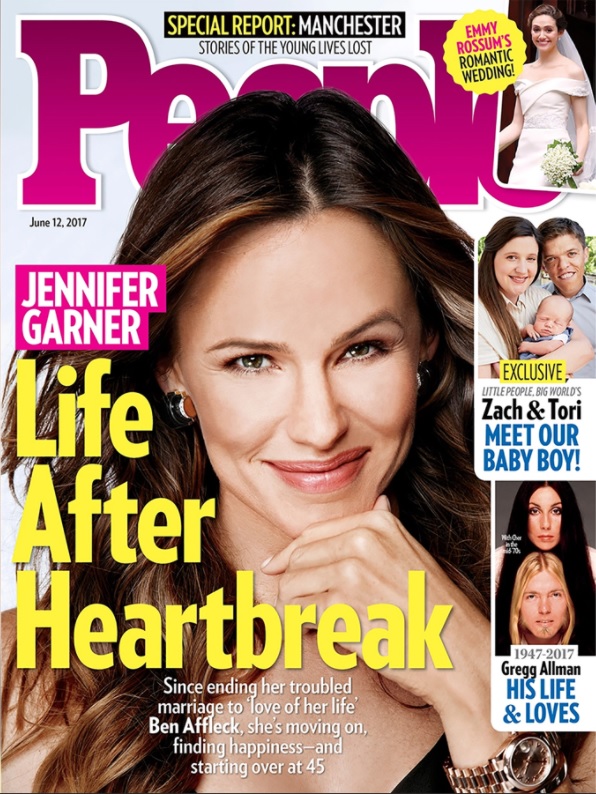 Sometimes, I forget that People is a tabloid dressed in a Real Magazine costume. Thankfully, I have things like this bullshit Jennifer Garner cover story to remind me.

As you can see, the cover story for this week’s issue of People features Jennifer Garner. From the placement of the quotes around ‘love of her life,’ you might be forgiven for assuming that she gave the magazine a quote or, you know, participated in any way in this story. She did not, and she said as much on her Facebook page:

So, despite the fact that the cover photo of Garner looks like it was shot specifically for the magazine, and despite the misleading quotation marks, she had no say in the story and gave no insight into her “life after heartbreak.”

In addition to the nonsense of, you know publishing a whole article about someone’s personal life that they themselves had nothing to do with (which is often the case in “celebrity journalism,” there’s also the sexism and ageism inherent in making this a story in the first place.

Garner isn’t the only Jennifer People has fixated on with regard to relationships. Jennifer Aniston’s relationship and pregnancy statuses have long been hot topics for that magazine and others. I was particularly drawn to the subheading of the Garner cover mention: “starting over at 45.”

Oh my God. FORTY-FIVE. How will she live?! How is her hip not falling out? How will she go on after FORTY-FIVE without a HUSBAND?! As if it’s a surprise that she could possibly be doing well.

There’s another permutation of the sexism involved in this, and that is what’s been labeled as the “Sad Dad” trend. Ben Affleck, Brad Pitt, and Tobey Maguire have all had relationships end lately, and have the nerve to be, you know, sad about stuff in public. Whereas women are expected to fall apart when their relationships end, it’s a big ol’ surprise when men have feelings—so much so that it becomes labeled “a trend” in the media. Because they might be doing this now, but believe me, men will totally get over this whole “feelings” thing soon enough. Trust.

Setting aside the fact that just because celebrities live in the public eye doesn’t mean their personal lives are at all our business, there is a huge amount of sexism (and its BFF, ageism) that is inherent in the way we report and receive information about the lives of public people. After all, check out this excerpt from the GQ profile on Brad Pitt that epitomizes “Sad Dad:”

“When he was on a flight to Los Angeles aboard a private plane, there was a reported altercation between Pitt and one of his six children, 15-year-old Maddox. An anonymous phone call was made to the authorities, which triggered an FBI investigation (ultimately closed with no charges). Five days later, his wife, Angelina Jolie, filed for divorce. By then, everything in Pitt’s world was in free fall. It wasn’t just a public-relations crisis—there was a father suddenly deprived of his kids, a husband without wife. And here he is, alone, a 53-year-old human father/former husband smack in the middle of an unraveled life, figuring out how to mend it back together.”

Pitt gets to be not just a father, but a human father (lest we forget that men are people, because we all know how marginalized men are) who has been “deprived” of his kids (even though there was an alleged altercation between him and his fifteen-year-old-son). Despite his admitted drinking problem and reported anger management issues, he gets to be the subject of a lengthy profile talking about how put-upon he is and how he’s going to mend his life. I mean, I know that GQ is a men’s magazine, and so they’re going to 1) profile men more often, and 2) make those men the heroes of their own stories no matter what, but COME ON.

Contrast that with the Garner People cover story (which I admit is like comparing apples and oranges as I consider GQ a Real Magazine) when it’s quoting “Jennifer Garner insiders” and actually attempting to write a “positive” story about how Garner is “fine:”

“Between her family and career — Garner has three upcoming films, Wakefield; The Tribes of Palos Verdes, which she stars in and executive-produced; and Simon vs. the Homo Sapiens Agenda — the actress hasn’t begun to think about dating again just yet.

“”She will eventually, but it will be a while before she does,” says the insider. “She’s certainly not jumping up and down and screaming, ‘I’m single!’ and planning dates. She still says Ben was the love of her life.””

The article goes on to say that Ben Affleck’s focus, along with being a good father, is going to be on “working on himself.” While Affleck gets to “work on himself” and Pitt gets to be sad and alone while “mending his life,” one of the first things People asks about Jennifer is Will she be dating again any time soon? Because as we all know, women are only valuable as part of a set.

I see you, celebrity journalism. I see how you’re trying to sell me not only an arbitrary beauty standard, but an entire template for How to Woman Right, and I’m not buying.