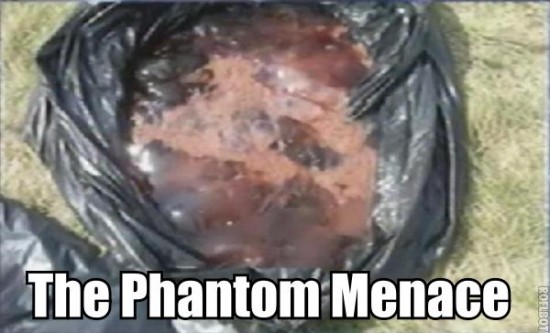 What even is that? Is it a puddle of bubbling radioactive waste? Is it microwave lasagna gone horribly wrong? No, it’s actually part of a large jellyfish. And a quite wrathful one at that: Not only did it sting somewhere between 100 and 150 people, but it did so while being dead. What medal would Halo possibly give this guy? Invincible from beyond the grave? But more important, how did this happen?

Well, on a beach in Rye, New Hampshire, many families were giddily at play, swimming in the water or lounging on shore. But then, the lifeguard saw something amiss in the water. Upon investigation, it turned out to be a giant, but quite deceased jellyfish. As a public service to everyone, he thought, he got a pitchfork (which was conveniently lying around, I guess?) and scooped up the tentacled creature. Unfortunately for him and over a hundred other people, those tentacles all fell off and floated back out into the water, dispersing themselves along the way. All of a sudden people were getting stung everywhere by these dismembered, oozy, strands.

And that is how a dead, 50 pound jellyfish can merit an emergency evacuation. Luckily, we have no reason to think there is a horde of dead electrified marine creatures heading our way. As they say at English Heritage, this was a “very rare incident.”

(Via Boston and My Fox Detroit)