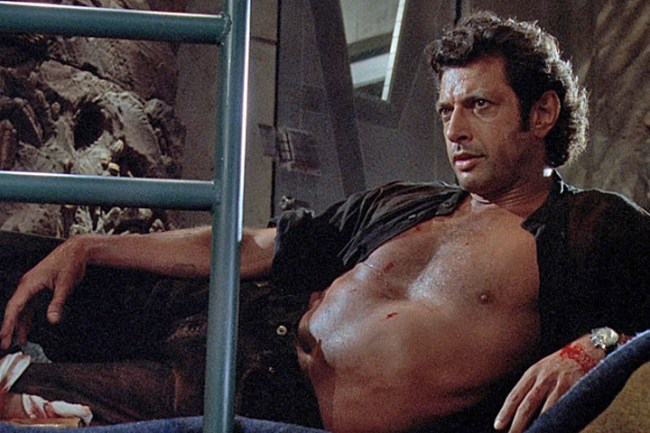 I certainly have some concerns about the Jurassic World sequel, but once I heard that Jeff Goldblum will be making his triumphant return as Dr. Ian Malcolm, I knew I was going to see it. And now it looks like Goldblum will also be bringing some of his show-stealing touch to the script.

Jurassic World director Colin Trevorrow sat down with MTV’s Happy Sad Confused podcast to talk about his work on the script for Jurassic World 2. (Trevorrow will not direct the sequel; that job goes to The Orphanage and A Monster Calls director J.A. Bayona.)

Trevorrow revealed that the sequel feels more like a “horror-thriller with dinosaurs in it,” and it draws thematically on “the depths of depravity that humans will seek in order to satisfy the need for profit.” But that was only part of the writing process. For the dialogue for Dr. Ian Malcolm, he drew heavily from Michael Crichton’s original novels – and from Goldblum.

“Maybe one of my highlights of this whole process is Goldblum,” he said. “Jeff Goldblum called me – and I’m not going to do an impression – but he was like, ‘Look, I’ve added a couple things, and I thought I’d perform it for you.’ [Laughs] I was like, ‘Oh, great, okay.’ So, we sat on the phone for an hour as he ran these lines, and we talked about it. And, I mean, that’s – it was almost better than being there on set. It was great.”

Goldblum certainly has his own memorable way of delivering lines, so I’m excited to hear that he’ll help craft them. Plus, given Trevorrow’s treatment of women in Jurassic World, the script is one of my main sources of concern for the sequel, so I’m glad that somebody else is at least working on it – however briefly.

Yes, there was a lot to like about Jurassic World, but my biggest fear for Jurassic World 2 is still that it will repeat the sexism of the first film. However, Trevorrow did share an anecdote about Wonder Woman on this podcast that gave me some small hope. “[Wonder Woman] had an amazing effect on my daughter,” he said. “Like, it was just elemental…She wants to watch this movie every day. She is Wonder Woman now. She’s five. And it was striking…You watch things a little bit differently as a father, and you start to see media, and you see the way that female heroes are presented to young girls. And that movie was something she had never seen before.”

Dude, she can see something like that again! You’re a screenwriter! For a movie with female characters! Make it happen! Be like Life, and find a way!