The Death of Zara Young, or: How I Learned to Stop Worrying and Hate Jurassic World When I first saw Jurassic World, I was trying desperately to like it. Summer 2015 was, with the shining exception of Mad Max: Fury Road, a terrible time for big action movies, and I was searching for something to break that. So I confess, I was looking for reasons to like it, and while I wouldn’t say that my initial thoughts on it were completely positive, I at least didn’t hate it. I am but a man; I am sometimes weak.

But Jurassic World stuck around in my brain for a lot longer than it should have. I kept thinking about it, over and over, and every time I thought about it, its flaws became bigger and harder to ignore, and its good points seemed smaller and less relevant. So when it hit DVD, I gave it another shot, and something odd had happened: Every moment of the movie was repellant to me. There wasn’t a single second I could even remotely stand.

That level of change isn’t unprecedented, but it is rare and therefore warranted further exploration. So, I elected to spend some time thinking and trying to reverse-engineer this intense distaste. While I found many, many, many reasons to dislike this film, I found almost all of them could be captured by a single scene at about the midpoint: The death of Zara Young. Zara, for those of you who didn’t see or don’t remember this movie, is Katie McGrath’s character, who dies at about the midpoint, during the pterodactyl attack. This is a relatively minor scene, especially in the grand scheme of the film’s many, many crimes against cinema, but I feel it exemplifies so much wrong with the movie that it deserves a closer inspection.

The first thing—the thing that stuck out to me about this sequence, even when I first saw it—is how long it is. From the moment Zara gets picked up by the pterodactyl to the moment when the scene finally ends is just about 60 seconds. That may not sound long, but in terms of Jurassic Park death sequences, it’s an eternity.

Far and away second place longest death is Dennis Nedry from Jurassic Park, which only runs about 30 seconds long (and that’s if I’m being generous and counting when the dilophosaurus first spits in his face as first contact). Bronze medal goes to Peter Ludlow in The Lost World: Jurassic Park at about 15 seconds. No one else really breaks 10 seconds. 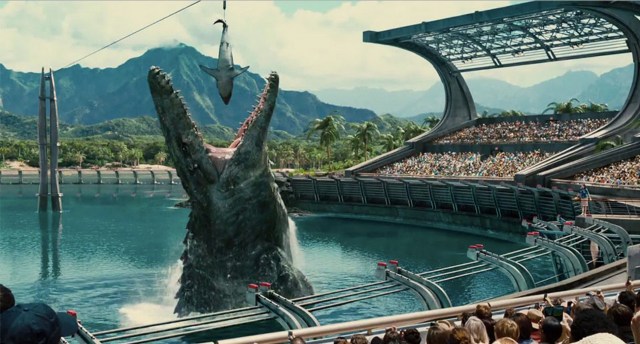 So what is she being punished for? Well, she appears very briefly at the beginning, charged with keeping track of Zach and Gray (and while it’s not the subject of this article, I have to say that I cannot stand either of them). While at a fairly tame exhibit, she fields a phone call about her upcoming wedding, and they run off … and that’s it. Aside from a couple of brief appearances on the phone with Claire, the next time we see her, she gets killed.

So, the only thing that really characterizes her is that one phone call concerning her upcoming wedding. This is the only thing that really keeps her from being just another face in the crowd, so it’s the only possible thing the movie could be punishing her for, and it fits so neatly into a stereotypically “woman” category that it can lead to only one conclusion: Jurassic World is punishing Zara for being a woman.

It would certainly fit into the film’s consistent retrograde misogyny. It only takes a quick glance at the main female character to get that Jurassic World has a real problem with women. Claire (Bryce Dallas Howard) is supposedly the film’s lead and grounded moral center, but the movie continually treats her like crap.

This runs the gamut from male characters outright insulting her (Chris Pratt’s Owen spends a huge chunk of their first conversation by mocking her over their failed date) to characters not taking her desires and contributions seriously (her nephews, upon seeing her save Owen from a pterodactyl and seeing Owen back a van through a crowd, declare that Owen is the person they want to remain close to, and the less said about the idiotic, condescending conversation she has with her sister, the better). 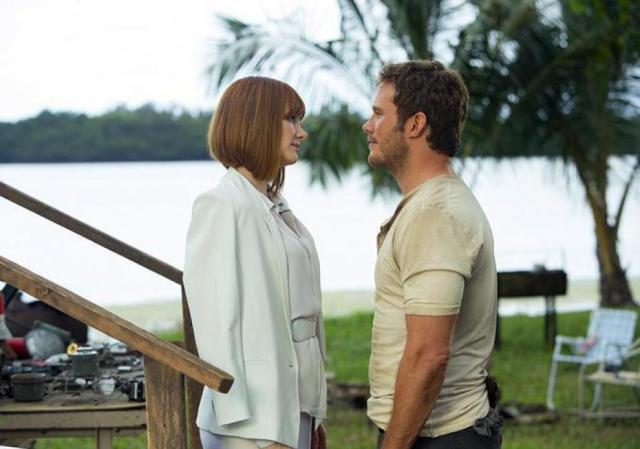 Which is all a shame, because the film, whether it knows it or not, winds up portraying Claire as the most intelligent, competent, and grounded character in the movie. Her boss tells her to lighten up and stop being so stiff, but his more relaxed attitude to life causes him to fly a helicopter into a dangerous situation and he, along with dozens of others, dies as a result. Owen mocks her for treating the animals in the park like they’re numbers on a spreadsheet, but that’s his job, not hers, and his inability to control the raptors, or recognize a trap set by the Indominus, causes more people to die. Claire’s need for control is exactly what the park needs to function, but the movie continually treats it like it’s a negative, and acts like she needs to relax.

Jurassic Park is, for a movie in which a dinosaur attacks a car, a fairly restrained movie. Okay, so it’s not going to be My Dinner With Andre any time soon, but it’s still got a sense of how to pace itself. It takes its time setting up the characters, the various conflicts within the story, and the variety of ethical questions it’s asking us to consider before getting to the dinosaur rampages.

Even when it finally gets to it, the film is certain to pace the scene out. The initial T-Rex attack on the cars is a masterwork of this, drawing out the scene, making sure each character is involved and we always know what’s happening with them, as well as building the suspense even as the T-Rex is already on screen. 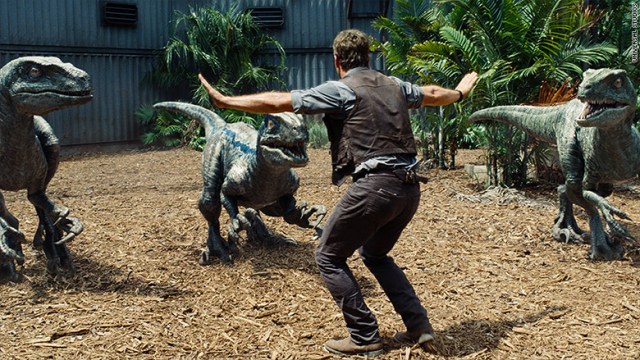 Jurassic World, on the other hand, is a movie that has no idea how to restrain itself enough to make any of its scenes mean anything. Yes, fine, the pterodactyl attack is very impressive looking, but it doesn’t pace itself or scale up. It establishes its baseline and then just sort of proceeds, and it does this for every single scene. Even the final fight between the Indominus and the T-Rex doesn’t really escalate in any real way.

This makes the movie incredibly boring to watch. The scenes don’t have rising or falling action, they just sort of meander around until they’ve reached their carnage quota and then end. They also tend to forget to make sure the audience keeps track of the moving parts; I was 100 percent certain that all of the raptors were dead when one of them showed back up for the finale, and the movie left Omar Sy’s character in a log and totally forgot about him.

Which brings me to my final point about this scenes: the one that encompasses both of the above, and many of the other problems with Jurassic World. For a film as obsessed with the previous films in its franchise, Jurassic World has no idea how to actually be like Jurassic Park.

Jurassic Park is surprisingly thoughtful, at least for a movie devoted primarily to dinosaurs eating people. I’m not just talking about the regular discussions on the ethics of the science involved; I’m talking about how much depth it manages to include in a comparatively short amount of time.

Look again at the first T-Rex attack and how much is communicated about each of the characters, just through how they handle the situation. Gennaro panics and flees, Lex and Tim try to handle it on their own and screw it up, Grant tries to think his way out, Malcolm makes a brave, but ultimately ill-advised decision. This is all very fast, but it tells about the characters without stopping the action. 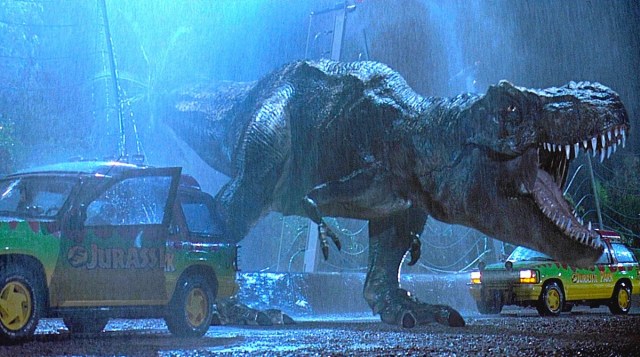 Jurassic World, on the other hand, doesn’t have much in the way of underlying themes or even characterization. It makes noise about being a commentary on sequels, but it never comes to anything and only seems to exist to try to confuse criticism. (Is the Indominus Rex incredibly boring looking because it’s an intentional satire on crappy sequels, or is the design team just really bad at their jobs? We’ll never know.)

Without any depth to the story or characters worth caring about, there’s nothing to engage in. Again, bringing this back to Zara’s death (which, if you’ll remember, is supposedly the subject of this article), we don’t know anything about her. Who is she, outside of Claire’s assistant and someone who’s getting married? Every character, even Genarro, who appears in Jurassic Park gets some depth, and the other characters react when they die. Zara’s death gets so little reaction from everyone else in the cast and means so little that, if it didn’t take so long and make me so uncomfortable, I probably wouldn’t have noticed.

The relationship Jurassic World has with Jurassic Park is ultimately similar to the relationship Zack Snyder’s terrible Watchmen film had with the comic it was based on: a near fetishistic reverence for the aesthetics of the original without any real understanding of the elements that made the original great. Jurassic Park is intelligent without being too complicated, engaging, exciting, well-written and intense, whether it’s your first watch or your 10th. Jurassic World is vapid, underwritten to the point where it might as well have been made up on the spot, and wears out its welcome halfway through the first viewing. A few repeated shots and scores can’t make a movie as good as Jurassic Park.

Believe it or not, there’s more we could go into—even elements of the badness not embodied by Zara’s death scene. We could talk about the bizarre decision to layer CGI on top of their practical effects, which has the net result of all of it looking terrible. We could dive into the minutia of the script, which occasionally begins to flirt with Wiseau-ian levels of badness. I could go into the monumental stupidity of the raptor subplot. Hell, I could probably get a paragraph or two out of how annoying the two kid leads are. Jurassic World, like its closest movie cousins, Michael Bay’s Transformers, is like an onion of badness—each layer peeled off reveals a new one—but since that would be leaving the purview of this article, I think I’m going to end it there.

… but seriously, those kids are the worst.

James is a Connecticut-based, Alaskan-born cinephile with an obsession with The Room and a god complex. His interests include Warhammer 40k, the films ofNicolas Cage (both good and bad), and obscure moments in history. He writes movie reviews for Moar Powah under the name Elessar and also has a blog, where is reviewing every episode of The X-Files at I Want to Review. His twitter can be found at Elessar42, and his tumblr can be found at FootballInTuxedos.