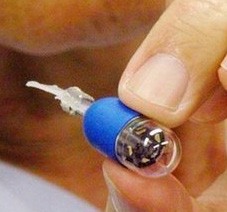 Adding to a long line of fascinating and generally horrifying things to be created by the Japanese, which includes artificial meat made from human feces, a gaming system for urinals, and the make out box, is a new “pill” that swims through your gastrointestinal tract. The pill, nicknamed the Mermaid, is directed by a doctor-controlled joystick. The tadpole-like capsule endoscope self-propels through a host’s digestive system relaying pictures of the situation on the inside back to the doctor.

While the device has not been approved for widespread clinical use, it has been tested successfully in a living human patient. The device is approximately one centimeter in diameter and 4.5 centimeters long, and can be swallowed for examination of the stomach, or inserted, well, in the other end, to capture images of the colon. The test images taken were of the colon.

The first capsule endoscope was developed in the 1980’s and they caught on to widespread use in the 2000’s, but this is the first time that a self-propelled endoscope, which does not rely on muscle contractions to move it through the digestive system, has been used. The first design for the Mermaid capsule was tested on a dog’s stomach in 2009, and based on information gathered from that experiment, was modified and made smaller for use in humans.

The new endoscope technology, which can be used to detect cancer in addition to other gasterointestinal diseases, was presented at the International Conference on Digestive Diseases by researchers from Ryukoku University and Osaka Medical College in Japan.