Hidden Figures Star Janelle Monáe Gets Us Hype, Discusses the Importance of Representation 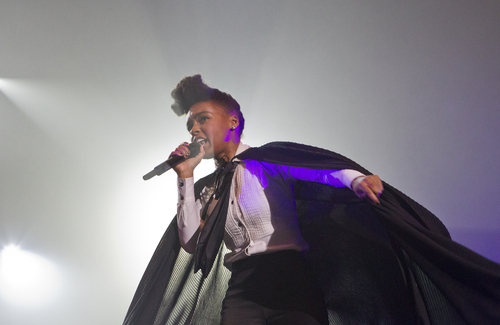 Hidden Figures tells the story of African-American NASA engineers Katherine Johnson, Mary Jackson, Dorothy Vaughan, Kathryn Peddrew, Sue Wilder, Eunice Smith and Barbara Holley. Although those women played an invaluable role in the Moon mission, their contributions have gone largely unrecognized in mainstream media, and have even been erased entirely in some retellings of NASA’s history.

Writer Margot Lee Shetterly honored the contributions of those Black female engineers in her book, Hidden Figures: The Story of the African-American Women Behind the Space Race, and, come January 13th, we’ll all be able to see them represented on the big screen. Singer/actress/tornado of talent Janelle Monáe, who plays Mary Jackson in the film, was present recently during a screening of scenes from Hidden Figures at the Essence Festival.

According to the Associated Press, Monáe revealed at the screening that she cried when she first read the script “because I had never heard of Katherine Johnson or Dorothy Vaughan or Mary Jackson. But I know these women and their struggles. I am so honored to play [Jackson]. This film is so important because it shows black people and black women in a different light.”

After discussing the ways these women have had their contributions erased in films like Apollo 13, she also reiterated the importance of telling the stories of women like Jackson: “It is so important, that we as women, African-American women, tell our stories. These three women opened doors for us and literally helped change the world […] It’s important for children, especially inner-city children to see their future selves in a different light. We’re not all the same. There’s so much depth to us and films like this help to change the stereotypes and make studying STEM cool. It’s absolutely the coolest thing to be able to send someone into space.”

The screening was also attended by astronaut Victor Glover and Monáe’s co-star Aldis Hodge, who plays her husband in the film. Hodge admitted that, prior to becoming involved with Hidden Figures, he had no idea of the contributions these women had made to NASA: “I was so surprised to find out that black women worked at NASA. Who knew? I didn’t and that’s devastating. Something this great should be common knowledge.”