Jane the Virgin: Why Jane and Petra’s Friendship Is a Cornerstone of the Series 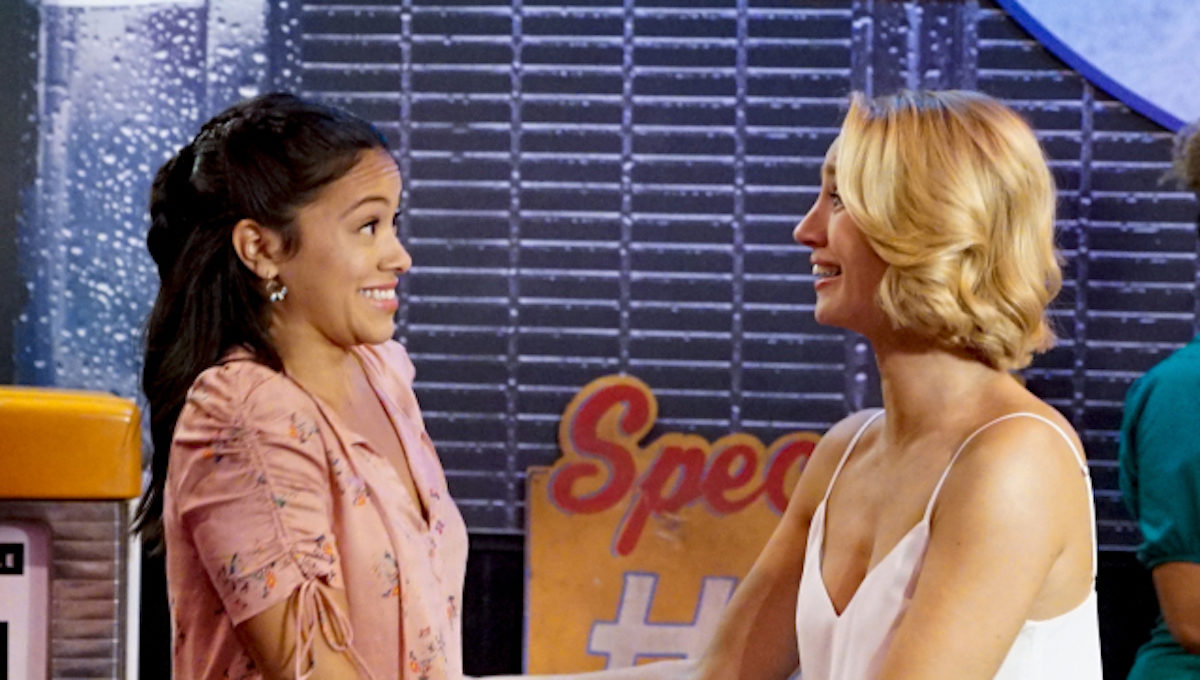 It’s hard not to be caught up in the telenovela whirlwind that is Jane the Virgin, so charmed by the sweeping romance and staple tropes that it would be easy to miss some of the series’ minor (and few) missteps. While it’s great the show has finally committed to Rafael (Justin Baldoni) being the “true love interest,” it hasn’t had a great track record when it comes to Jane’s friendships with other women.

Aside from the relationships Jane has with her mother and abuela, Jane the Virgin hasn’t developed Jane outside of the supportive bubble she’s built—her friend Lina (Diane Guerrero) moved away long after the series stopped caring about their friendship. However, Jane and Petra’s relationship has flourished, especially in the last couple of seasons, and it’s their friendship that has been one of the most satisfying story arcs to watch in season five.

Jane Gloriana Villanueva (Gina Rodriguez) has enchanted audiences from the moment she made her onscreen debut, and that love has only grown over five seasons. In fact, it’s hard not to fall in love with Jane. With her love of telenovelas, writing, and her heart of gold, what’s not to like?

Petra Solano (Yael Grobglas), on the other hand, is one of the fair few who hasn’t always liked Jane. In fact, the respect they now have for each other had to be earned, traveling a long and bumpy road to get to where they are now. It’s gratifying to see the show lean more heavily into this underappreciated friendship because of the journey taken to arrive here. It might be that their relationship has flown under the radar for so long, but it’s the only friendship between two women that’s been properly developed on the show. (Yes, I’m still bitter about the possibilities of Jane and Lina.)

Season one Petra was openly hostile towards Jane and even tried to get her to give up her unborn son to her so that Petra could save her dying relationship with Rafael. Similarly, Jane wasn’t all that convinced Petra could be trusted. Complete opposites on the surface, it’s this difference that makes their friendship so unique. Jane has a kind and open heart, is always willing to lend her support, and has no trouble expressing herself; Petra is far more abrasive in demeanor and exudes confidence that comes, in part, from having privilege and wealth. Jane is used to being loved and supported by a caring family, while Petra has been taken advantage of and is an afterthought to hers. 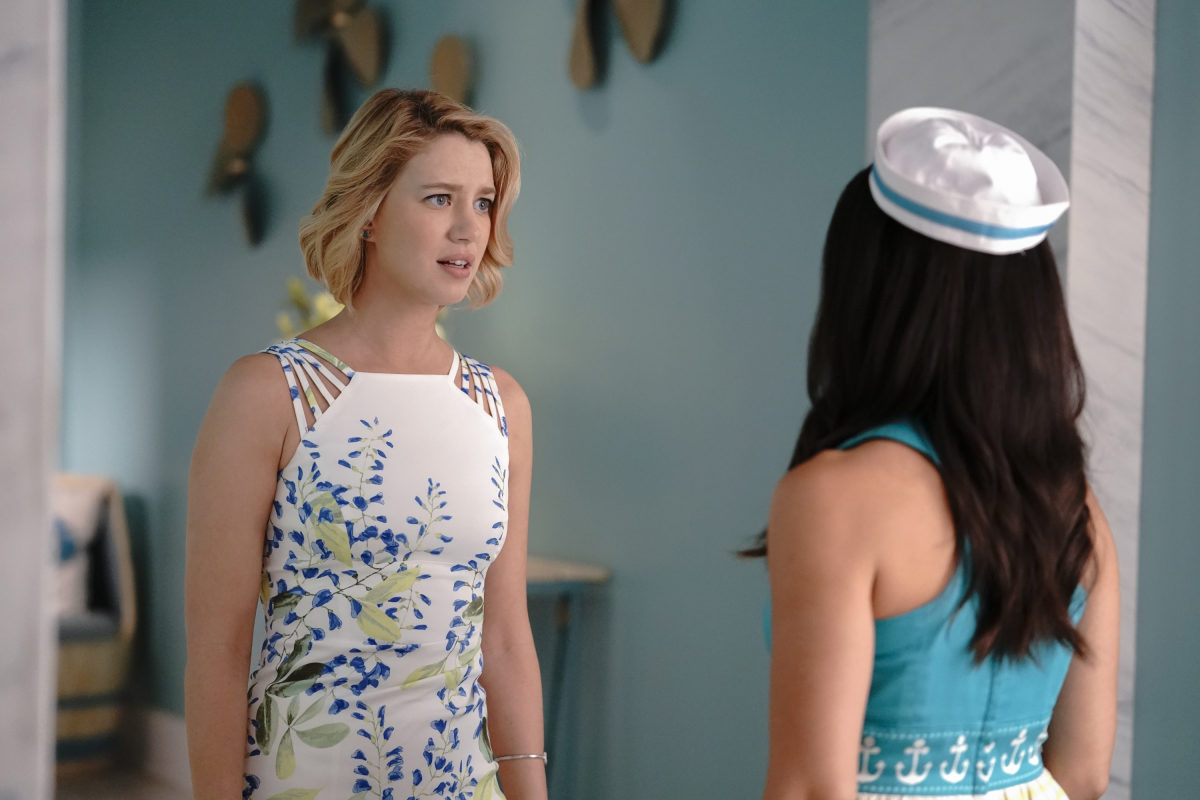 Petra started off the series having cheated on Rafael with his best friend. She was also an obstacle for Jane and Rafael and their decision to have Mateo. Petra’s storyline involved a lot of petty behaviors that she believed would win Rafael back, and she wound up doing some extreme things to get what she wanted, like getting Rafael demoted at the Marbella and hiring an escort to break up his relationship with Jane. In her head, Jane got what Petra had worked so hard for, and her last hope to save her relationship fizzled. Despite all that, she’s one of Jane the Virgin’s most complex and undervalued characters.

But what changed? What made them get to the point of friendship? Well, at the end of season one, Petra inseminated herself with Ralph’s sperm (Insert narrator: It is a telenovela. Crazy, right?), and Jane spent a lot of season two trying to offer support. If nothing else, they now shared a family, and that meant they would both be in each other’s lives for good. They finally had common ground, and it proved to be the building blocks for their eventual friendship. They grew into and became each other’s family, which is something Jane thrives in and what Petra has always wanted.

Jane and Petra also brought out different sides in each other. Petra tested Jane’s patience, and Jane often had to figure out new ways to be there for someone who was outside of her comfort zone. For example, when Petra was delivering her twin daughters at the end of season two, Jane believed repeating her own mother, Xiomara’s (Andrea Navedo), soothing words would help Petra get through the labor. Jane quickly realized, however, that the way she received love was different from Petra, and it was only tough love and a few commanding words did the trick.

Additionally, they challenge one another. Most recently, Petra pushed Jane away when she found out Rafael was taking antidepressants and didn’t want Jane to know. As a friend to both, Petra was caught between a rock and a hard place. Still, Petra opted to protect Rafael without realizing she was also hurting Jane by lashing out and keeping her away. Petra had to learn that a friend’s support was paramount, regardless of the reason. In season five, Jane had to learn the hard way that she should make an effort to ask Petra about what’s going on in her life instead of treating her like an afterthought.

Though the buildup towards a more substantial relationship was slow, their friendship took a major turning point in season four. Jane, for instance, is always taken aback when she finds out someone dislikes her, such as the other Jane, a.k.a. JR, Petra’s girlfriend (Rosario Dawson). It’s a hard pill for Jane to swallow, and she tries her hardest to please JR, even when it’s clear nothing will change the other woman’s opinion of her.

When Petra tells her to back off, Jane is forced to admit to only wanting JR to like her for Petra’s sake. Then, in a moving, yet comedic, moment, Jane tells Petra she loves her for the first time. Petra is ruffled but admits she loves Jane as well, even though she’d rather not admit it in public (but is comfortable doing it in Czech, knowing no one would understand). It’s a memorable moment for their friendship, and the scene is indicative of how far they’ve come.

“It’s almost like they need each other in spite of themselves” is how Yael Grobglas once described Jane and Petra’s relationship, and it’s true. They went from openly disliking each other to becoming friends. They have had to put in the work to get on the same page, and they’ve managed to put in the effort despite the challenges in communication or differing perspectives. Their strengthened bond is a testament to the evolution of the characters and, as Jane the Virgin nears its end, Jane and Petra’s friendship will forever remain a wonderful cornerstone of the series.