The Importance of Jane the Virgin‘s Bisexual Character Reveal 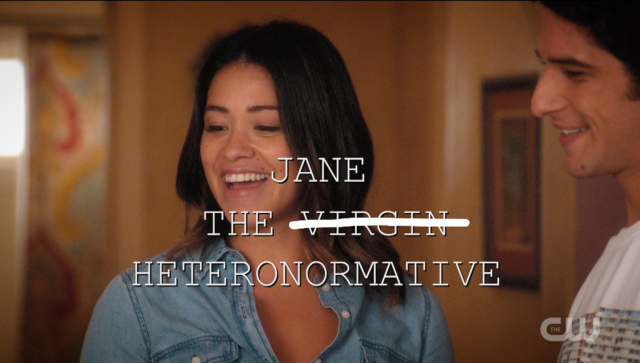 First of all, if you haven’t been watching Jane the Virgin, you’re in luck, because Netflix has the first three seasons up, so you can scoot over there. Jane has never strayed away dealing with complicated issues from abortion, mental health, illegal/legal immigration, and the general hardships of being a young mother. In the most recent episode of Jane, they revealed a male bisexual character and had a very nuanced conversation about it.

This is not the show’s first time to discuss LGBTQIA identities. Back in season two, it was revealed that Rogelio’s father was gay, and there was a whole storyline about how he was leaving his wife to live a life outside of the closet. It was powerful to see a show that had always had a religious undertone deliver a complex story about a Latinx man wanting to live his truth later in life.

In the most recent episode, Jane’s love interest and first love, Adam (played by Tyler Posey), was “revealed” to be bisexual. Adam was Jane’s first true love when she was nineteen, and they even almost got married. In the years since they were together, Adam has become a comic book artist and has now been getting reacquainted with Jane and her new life.

Jane finds out that Adam is bisexual when her best friend Lina’s fiancé, Danny, has a mutual friend in common who Adam used to date—a guy.

The reveal brings out a side of Jane that she feels uncomfortable with. She supports gay people, and she understands the hypocrisy and double standard of seeing male bisexuality differently than female bisexuality, but it still freaks her out.

Jane makes it seem as if her concern was caused by Adam waited so long to tell her, but the reality is that Jane, as liberal as she is, grew up in a Catholic environment and has some questions about Adam’s sexuality and what it means. And guess what happens … they have a grownup conversation! 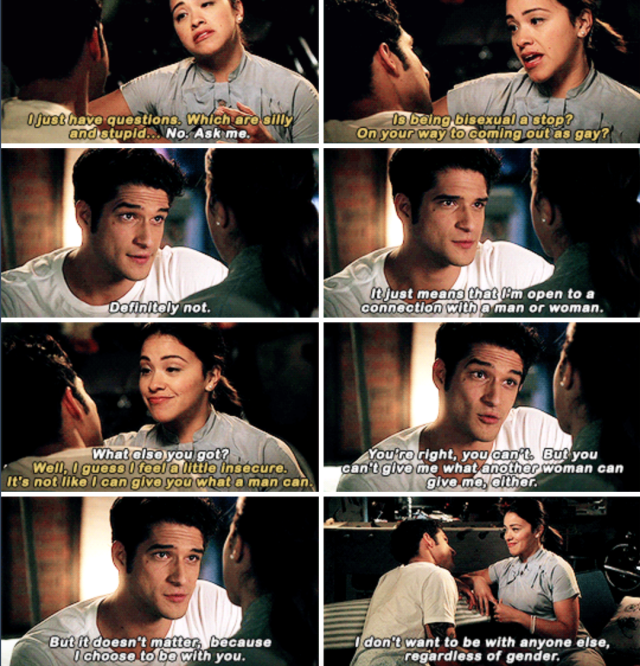 Yes, it is slightly heavy-handed, but you know what? I’d rather have a paint-by-numbers breakdown of this issue, because believe it or not, people actually feel this way about bisexuality, and biphobia exists, even within the LGBTQA+ community.

Not to mention it’s also awesome to see Adam Alvaro, a bisexual Latinx man (and a Virgo), be placed as a main love interest and potential father-figure on the show that has been at the forefront of amazing Latinx representation. And they called Adam bisexual. They said the word and they gave him more than one male partner! This never happens.

I also love that they waited for a few episodes to build Adam as a character before this “reveal,” because it allowed Adam to be his own person outside of his sexuality. Additionally, Adam’s sexuality didn’t seem like a bait and switch or a “gasp” moment, because he and Jane hadn’t had that conversation yet. Plus, Adam told Jane that his previous partners have had issues with his bisexuality, and that’s too real. A lot of people think that being bisexual means an endless parade of sexual partners, but the reality, a lot of times, is partners feeling insecure and having people explaining your sexuality to you.

The writers have told Variety that they plan on exploring Adam fully as a character: “He does have his own arc with a beginning, middle, and end.” Not to mention Showrunner Jennie Snyder Urman’s comments about their decision was excellent and shows the kind of care and consideration that comes from one of the best shows on television:

“…We felt like we hadn’t had a romantic hero who’s also bisexual. And also, it felt like an interesting place to explore because Jane would think she’s very progressive and Jane would think she’d have no issue with it — that would be the place she wants to come into the story with, but then she has to unpack a lot of stuff. Some of it is residual [because] she grew up in a very religious house and has certain ideas in her head that are based in telenovelas and based on romance writing. And she had to struggle with her own discomfort and get over it. It was more about Jane realizing that even though on paper she should be totally fine, there’s no issue, she had to accept the fact that things did not go down as smoothly as she wished it did. She had to confront what that meant and ask questions — and feel safe enough to ask questions because sometimes you feel like your questions are silly and you should know better, but ask them! So it gave her a chance to [do that] and then continue on with Adam, who is her romantic hero right now.”

While he clearly is not going to be endgame (a girl can dream tho), the writers are definitely making sure that Adam is a fully fleshed out character and making good use of Tyler Posey’s talent and beautiful, adorable face. (Scott McCall forever!) I’m also enjoying the fact that Posey is 26, playing the love interest of Gina Rodriquez, who is 33—not because she looks older at all, but in a world where men get to have younger actresses play their love interest, I’m glad Gina is getting hers, too. Go, Gina! Latinx excellence all around.