There’s a Weird New Theory That Jane Austen Was Poisoned

I blame that dastardly Mr. Wickham. 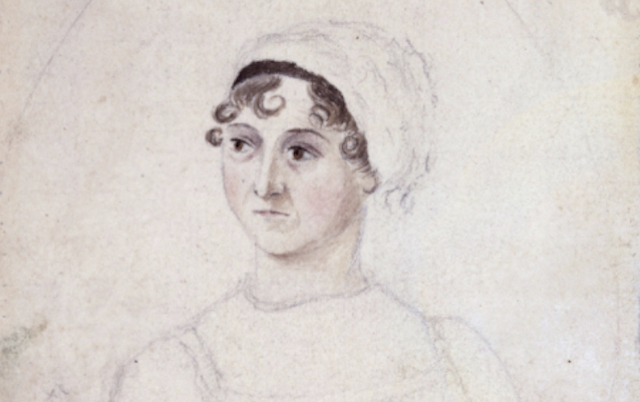 It is a truth universally acknowledged, that a beloved author who died young and unwed, must be in want of endless speculation about her life and death.

Maybe I’m part of the cult-of-the-author problem, because when The Washington Post headline blared WAS JANE AUSTEN POISONED? I couldn’t click fast enough. I waited with bated breath: was Austen’s life actually far more scandalous than presumed? Was it a scorned lover? A vicious rival?

Nothing so dramatic. Turns out, it might have been something in the water.

The cause of Austen’s death has been endlessly debated by the kind of people that debate about this sort of thing since she died at 41 in 1817. There’s always going to be another new academic diagnosis, an additional parsing of symptoms from her letters for a PhD thesis. But this time, the theory arrives in an article from The British Library—and it’s inspired by a collection of Austen’s glasses.

The theory suggests that Austen may have been subject to slow poisoning by arsenic, then a common enough substance found in everything from beer to candles to wallpaper. (No, really, that wallpaper could kill, but it sure was pretty.) Her fading eyesight, it is argued, suggests toxic exposure.

While it’s certainly not unreasonable to posit that Austen may have been exposed to a widely dispensed poison, the British Library’s primary evidence is three sets of spectacles found inside a desk donated by Austen’s great-niece in 1999. Per The Washington Post:

Austen eventually suffered from very poor eyesight, if the eyeglasses indeed belonged to her. The glasses varied in strengths. One of two tortoiseshell glasses, according to the British Library’s analysis, was quite strong. Perhaps the glasses’ increasing diopters told a narrative.

“Could it be that she gradually needed stronger and stronger glasses for reading because of a more serious underlying health problem?” wrote Sandra Tuppen, a curator at the library, in the article. “The variations in the strength of the British Library’s three pairs of spectacles may indeed give further credence to the theory that Austen suffered from arsenic poisoning, albeit accidental.”

This all revolves around an awful lot of ifs and mays. First of all, though the desk was Austen’s, there’s no guarantee that the glasses belonged to her. Secondly, even if they did, failing eyesight can have many causes, both natural and tied to other escalating conditions. The article also cites Austen’s self-reported skin discoloration, which she described as “black & white & every wrong colour,” but again, this symptom is not unique to heavy metal poisoning. Existing popular theories for Austen’s cause of death include Addison’s disease, cancer, and tuberculosis.

The British Library believes that if Austen was poisoned, the poison was likely delivered by a tainted water supply, or else Austen may have inadvertently dosed herself—many medicines of the day contained arsenic, and she was known to be ill for some time. Of course, already a host of Austen scholars are up in arms about the article’s suggestions, with one calling the new theory a “quantum leap.” It’s unlikely that we’ll ever have a definitive answer.

And do we really need one? While I admit the literary nerd and Austen admirer in me was quick to read as much as I could about this, in the end I can’t help but feel like we won’t have much to gain even if we had absolute proof in hand.

Would it change Austen’s works or the way we think about her if she was the victim of accidental poisoning rather than a disease that took her too soon? As Austen herself wrote in Emma, “Surprises are foolish things. The pleasure is not enhanced, and the inconvenience is often considerable.”

(Via The Washington Post, The British Library, top image, Portrait of Jane by her sister Cassandra)