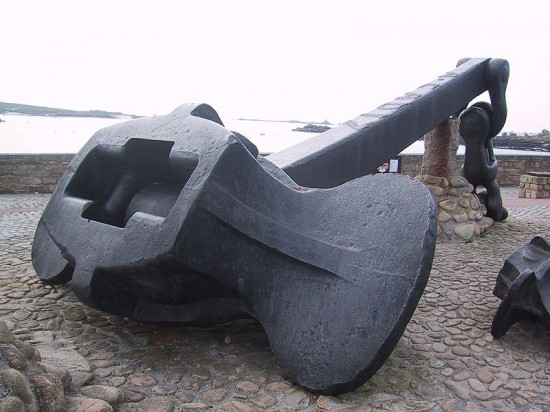 As we all know, the Internet is not a series of tubes. Except of course, when it is a series of tubes. While the whole “tube” analogy is woefully inaccurate when it comes to the fallacy that there is some amount of finite space or bandwidth to the Internet, there are in fact cables that pipe internet across the oceans. Two of these pipes have had the misfortune of being hit by a rather large anchor, crippling Internet access in six countries: Kenya, Rwanda, Burundi, Tanzania, Ethiopia, and part of South Sudan.

While waiting for access to a port in Mombasa, a ship dropped the offending anchor in a restricted area off the coast. The anchor barreled towards the sea floor, as anchors are wont to do, and upon contact damaged two of three undersea fiber-optic cables responsible for delivering high-speed Internet access to a large portion of Africa. The two damaged cables link the eastern costal region of Africa to the United Arab Emirates and link countries in the affected region to each other. The remaining cable maintains a link between the affected region to Europe, India, and South Africa.

The East African Marine Systems, the owners of one of the cables, have told the BBC that repairs may take up to 14 days, during which period the average Internet speed of users in the affected regions can be expected to drop by 20%. In order to try and keep things going as best as possible East African Marine Systems and Eassy, owners of the second damaged cable, have bought some bandwidth on the surviving, intact cable. They haven’t bought much though, because it doesn’t come cheap.

Fortunately, the damage isn’t more severe, but it certainly does serve as a reminder that the Internet, while increasingly wireless, still has some of its plastic-coated, fiber-optic roots in real world. Hopefully we’re not too far off from an entirely wireless world wide web, but until then, we best watch where we drop heavy things.

As a bonus, check out this sweet video showing exactly how epic these cable-laying operations really are.