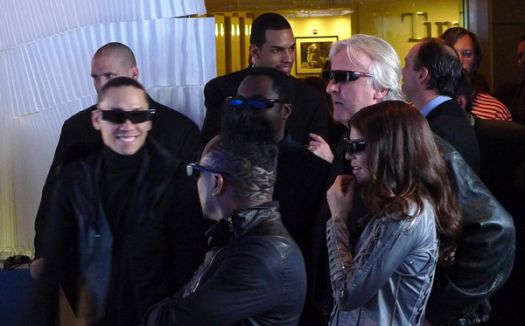 So director James Cameron isn’t going to crawl under a rock for another 13 years (the epoch that transpired between Titanic and Avatar): In March, he was spotted filming a “top secret outdoor concert” of the Black Eyed Peas to celebrate Samsung‘s 3D LED TV campaign launch, covered in not-so-top-secret depth by various blogs. Now, it appears, Cameron is on board to direct an entire 3D concert documentary for the Black Eyed Peas’ World Tour.

Band frontman will.i.am, not to be out done by Cameron’s “I’m the king of the world!” Titanic Oscar speech, told VIBE: “Right now, we are planning our 3D tour movie, and James Cameron is directing it – we have the biggest director, because we are the biggest group on the planet.”

According to will.i.am, the concert film will feature a “dope” storyline which James Cameron “came up with”; whether “dope” is a synonym for “engaging” or an acknowledgment that the plot will involve drugs is still unclear. He also outlined the band’s travel itinerary in the interview: “We’ve toured from America and Europe, to the Middle East, South America, Asia and Africa. It’s not like we go, ‘Yo, we are international, you know what I’m saying? London and Paris!’ Nah, that’s just two cities. We want to go across the planet.” Hey, let’s not forget about Antarctica.

The still-untitled documentary is scheduled for release next year.