Jade Is a Baraka-Slaying Boss in Mortal Kombat 11, Despite Fans Who Only Care About Her Outfit

I was super excited to see that Jade, one of my favorite characters in Mortal Kombat, would return to the game in MK 11 after being absent last time around. The gameplay trailer looks amazing, with her having some really badass staff moves, and her fatality against Baraka made me jump with glee.

She’s so cool, and with her new abilities via her reanimation (sometimes dead is better), I’m excited to play her. It’ll be interesting to see what her dynamic will be with Kitana and hopefully Mileena, if and when she is confirmed to return. Still, it had to be soured by an annoying hot take.

One Angry Gamer posted an article saying that Jade is “fully covered up and lacking in sex appeal,” complete with the hashtag “BurkaKombat11” on Twitter. Charming. There were, thankfully, plenty of people calling out this take for what it was, but there were others, including the original writer, who insisted it was addressing a legitimate concern about the gaming industry: the supposed attempt to appeal to people who don’t play games (SJWs) and that it symbolizes a creative decline.

Now, despite the loud comments from those who defended the take, I think most fans of Mortal Kombat just want good graphics, fun fatalities, and to see what’s next for their old favorites. Yet, there are those who do want the sex appeal as they play these characters. And yes, I know from the conversation about Sonya’s changes that it can seem as if this is just cherry-picking a few negative comments or one article, when they may not be the majority, but as a female gamer who does want to be a part of enjoying the character, the experience can be soured when people feel the need to write this type of story, because it keeps the conversation in one place.

Women also like playing as badass wish-fulfillment characters like Ivy, Bayonetta, Kasumi, and others. We enjoy the power fantasy, and as someone who is busty and often felt shame about that, there’s something fun about playing as Ivy, who is so powerful that she can walk out in whatever she wants and not fear anyone.

It’s part of the reason why Black Canary has always been one of my favorite superheroines. Still, that may be something I subjectively feel, but it doesn’t change that, when we are talking academically about the male gaze and what that means, it goes beyond our own personal tastes and empowerment.

When you look at the designs for the female characters in Mortal Kombat (2011), they just look ridiculous. They aren’t sexy or fun; they’re large breasts and cleavage for the sake of it, which, in the case of a character like Mileena, would even be fine, but Jade, Sonya, and Kitana all together just make it look what it is: silly and gratuitous.

It’s silly because the design is bad, their bodies are designed poorly, and it doesn’t add anything to the character. Plus, maybe this is just me, but in fighting games, part of the sex appeal of the characters is watching them destroy their enemies. Watching Jade in the above video, she as plenty of sex appeal when she disembowels her enemies. I love Anna Williams in Tekken because she’s such a petty mean girl who can also destroy her rivals in thigh-high dresses and heels.

My biggest issue with these “sexy costumes” (in cases where it’s not that they’re too sexually explicit for underage characters) is when they make no sense with the characterization of the character and add nothing but cheap titillation. Take, for example, the dual sex appeal of Jessica Rabbit (Who Framed Roger Rabbit) and Holli Would (Cool World).

Both of them are sexual characters with a ton of sex appeal, but their costumes have a style and substance that elevates them. Jessica’s red cabaret vamp looks signify her as a classic noir-style heroine, and Holli, who was also created to be a femme fatale, resents it, but uses her sexualization to get what she wants. Their sexuality is part of their character and how people perceive them. Does that make them feminist masterpieces? No. But it’s a layer of thought.

Dead or Alive, Mortal Kombat, and others have not been toning down their hyper-sexual female character because of “SJWs.” They’re doing it because the market is changing. 45% of women identify as gamers, and I’m sure there are more who casually pick up a game or two. They are part of the market these gaming industries want to bring in and make to feel invited.

It may seem like a small thing, but when you already feel isolated as a female gamer, and you see guys like this saying these things, it’s frustrating. The tweet linking that article showed up in my timeline at least five times yesterday. This is something people feel frustrated by—not offended, not triggered, just annoyed—because when we are trying to talk about a highly visible medium with so much potential for exploration, fun, and fatalities, it isn’t helpful when one side of the fan group thinks not having outfits like this is a sign of neo-Victorianism and “creative decline.” 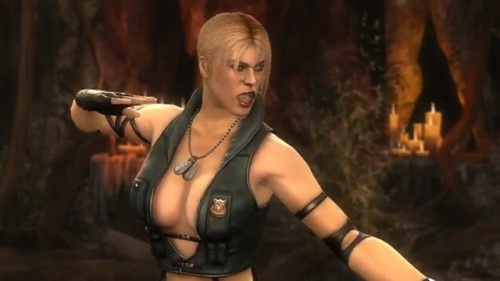 Girl I am so sorry. (image: NetherRealm)

It doesn’t represent all of the conversations going on around the game, but it isn’t hard to find, nor do you have to seek it out. Even if this isn’t something on your radar or conversations you are hearing, it’s happening, and if you hate having to hear about this topic, you should feel as encouraged to speak up against it as we are—preferably in a tag-team battle.