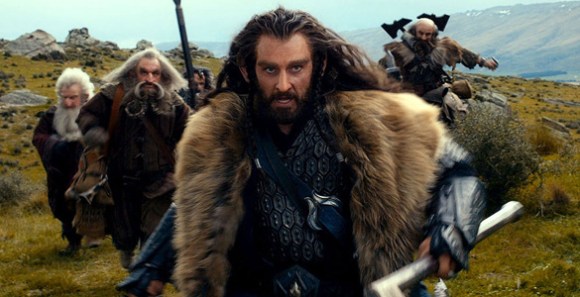 Oh dammit! Just the other day we had a report on how recent trademark applications meant Peter Jackson’s last film in The Hobbit series might be getting a title other than the previously announced, The Hobbit: There and Back Again. Now we’ve got confirmation from the horse’s mouth. ” ‘There and Back Again’ felt like the right name for the second of a two film telling of the quest to reclaim Erebor, when Bilbo’s arrival there, and departure, were both contained within the second film. But with three movies, it suddenly felt misplaced—after all, Bilbo has already arrived ‘there’ in the ‘Desolation of Smaug,’ ” Jackson explained on his Facebook page. Yadda, yadda, yadda, the new title for the third film is The Hobbit: The Battle of the Five Armies. Ok, I guess that makes sense. Though for J.R.R. Tolkien fans disappointed about the change, Jackson mentioned There and Back Again would find a home on future box sets considering it “encompasses Bilbo’s entire adventure.”

Thoughts on the change?