Issa Rae, America Ferrara, and Other Women in Comedy Talk Pay Gap, Representation, and “Being Likable” 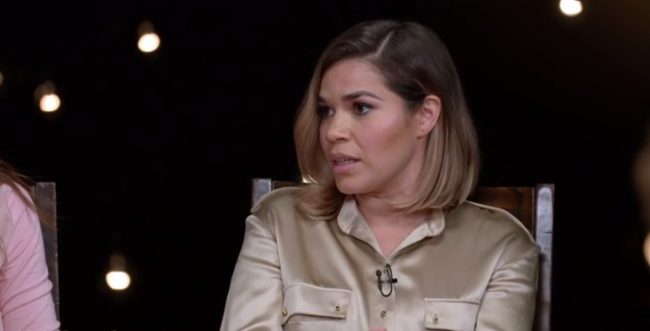 The Hollywood Reporter did a Comedy Roundtable featuring some of the most talented women on TV right now, and so Issa Rae, America Ferrara, Pamela Adlon, Minnie Driver, Kathryn Hahn, and Emmy Rossum discussed things like the pay gap, representation, and roles that are “likable.”

Of course, the pay gap came up because of Rossum’s recent victory over at Shameless, earning pay parity with co-star William H. Macy. The women talked about how that shouldn’t be considered An Accomplishment (even though it is), and the very good reasons why women are often afraid to ask for more.

“Well, when your contract is up … I waited for it to be up and then I said, ‘I’ve loved my experience and I’m so happy and so proud and everything, but I just want this to be right if we’re going to keep going.’ It wasn’t public for a long time when it was going on. And when it was finally public, it kind of took me aback. But as it was happening, I’ll tell you the person who supported me the most was William H. Macy. To have the man counterpart on my show be like, ‘Yes, she does deserve this and more’ was so validating. And after it became public, it was a quick resolution.”

For context, Adlon brought up the case of Suzanne Sommers, back when she was starring on Three’s Company:

“Suzanne Somers went through this with Three’s Company, and they got rid of her. She was a huge star on that show. And I know everybody thinks it’s fluffy, stupid ’80s, but she was on the cover of every magazine. She was massive. She’s a fascinating woman. They made a documentary about this. And basically, she asked for equal pay, and they not only said no, they said, ‘You’re fired.’ And she had to come and do one final scene where they let her in the back of the set, they made a fake Hawaii porch for her, and she calls Jack and Janet, and she’s like, ‘I’m in Hawaii. I’m never coming back. Bye.'”

So yeah, the fact that this is still a fight decades later is appalling. The conversation got interesting when Driver started talking about what should be done. She asked, “What do we do? Do we do the Steinbeck thing where you all go, ‘Well, I’m not going to work for that,’ and they go, ‘Well, there are 20 other women who will.’ Do you take a stand and go, ‘I’m not taking that role because there is no parity, it’s insane?’ What do you do?”

Ferrara brings up the issue of privilege saying, “I don’t know that that’s the solution. Each of us, we find ourselves in different places with different platforms and kinds of access, and we have to get it right with ourselves, the way you did, Emmy — saying ‘This used to feel OK to me; it doesn’t now,’ and coming to terms with that. And then having the conversation with the entire system built around you to keep you from asking for more. I feel like most of the times that I have had to ask for something, I had to convince my agents to ask with me. Having to ask your agents, ‘I want this thing,’ and having them say, ‘We don’t think you should ask for that.'”

Speaking of privilege, it was interesting to see that representation for women of color on this six-woman panel, with Rae and Ferrara, was almost half (could they not get Mindy Kaling or Constance Wu?), but not quite. Hearing Rae and Ferrara talk about their experiences in trying, not only to represent women, but represent the experiences of blacks and Latinx was especially poignant.

Rae, for example, brings up the fact that she hadn’t seen anyone who reminded her of herself on television since Moesha, and that she sometimes got the biggest flack for her comedy from black friends who called her “white people funny.”

Meanwhile, Ferrara wishes that her success meant more success for other Latinx performers, but while “We came out of the gate with Ugly Betty, and it was years and years after we went off the air that there was another Latino main character on television. So where you would think it’s like, ‘Oh, it works, let’s go in this direction,’ it doesn’t always end up that way.”

And then, of course, there’s the issue of being “likable,” especially in comedy when characters often do the most unlikable things for laughs. The actresses discussed the double standard women face when playing characters that aren’t necessarily warm and fuzzy.

Driver noted that “I actually have a real problem with women being called ‘unlikable’ because you never hear that about a man. They’re called antiheroes and they’re funny and they’re strong and they’re interesting.”

Rossum talked about the very complicated Fiona on Shameless saying, “[Fiona] went to jail for cocaine and overdosed a toddler and [I] still found the humanity in that. I guess there was a moment where I thought, ‘Oh, God, is everyone going to hate me?’ And then I felt like, ‘Who cares?’ Whatever anybody takes away from it is a reflection on them, not you.”

I would highly recommend checking out the full interview over at The Hollywood Reporter, complete with videos and photos, as these women give some great insights into both the problems that women face in Hollywood, and more importantly, what’s possible.