Star Wars John Boyega and Oscar Isaac are both very handsome men. Unsurprisingly, the space boyfriends are often the object of the internet’s affections in sometimes very explicit ways. While those tweets often just star under the radar (you know, like those teens who tweet at the Pope), Buzzfeed picked out a few choice tweets for Boyega and Isaac to awkwardly read out loud. If you thought you could discreetly and inconspicuously tweet about your desire for John Boyega to suffocate you, you were wrong. They know.

Here are a few selections:

Isaac: “It’s like a mad-libs. I want Oscar Issac to hold me in the study”

On “I would let john boyega leave me on read and still text that man again like nothing ever happened tbh!!!” [Girl same]:

Boyega: I appreciate that babe. I’m a busy man.

Isaac: That’s how I feel whenever you never invite me back!

On “I want john boyega to explore my guts”:

Isaac: Like she has gastritis. I didn’t know that you were trained in that.

Boyega: Yeah, you got to keep multiple streams of finance.

Isaac also reads a tweet referencing him eating Hot Cheetos with chopsticks and clarifies that they are lime Hot Cheestos because he is a man of taste and the two compliment each other’s thighs so, y’know. Also, I’ll be using this screencap as a reaction image for the rest of time: 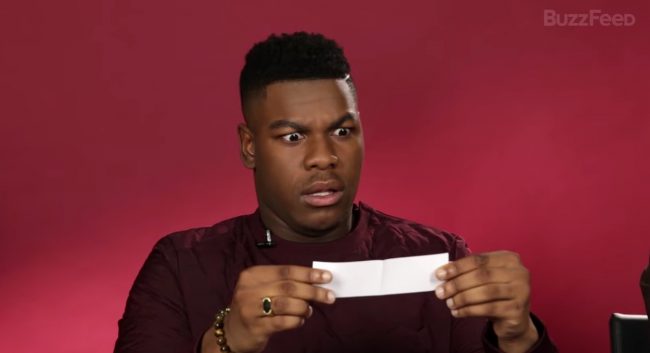