Is The Running Man My New Favorite Movie? Yes, Yes It Is.

This film is a TREAT. 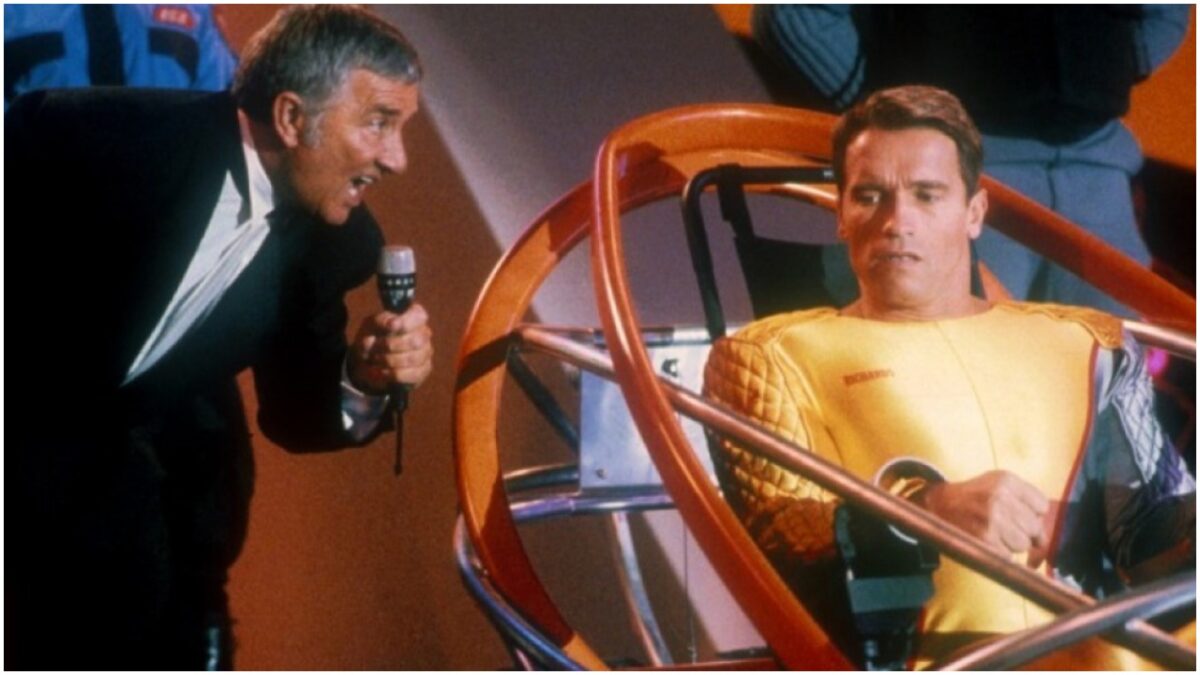 Has the weight of the world got you down? Do you feel constantly overwhelmed with pandemic living? Do you wish you could escape to a cheesy ’80s dystopia where everything is spandex and nothing hurts? Well reader, have I got a movie for you. This week, I sat down and watched the 1987 dystopian action film The Running Man, starring Arnold Schwarzenegger. And IT. WAS. AMAZING.

As a child of the 1980s, I was raised on Arnold Schwarzenegger films. The Terminator series was on near-constant rotation in my house, and if there was a new Schwarzenegger movie in theaters, my family was there opening weekend. And while I could perform a one-woman show of Total Recall from memory (and probably will when pandemic madness overtakes me), I had somehow never seen The Running Man.

It’s a lifelong mistake that was rectified when I saw the film streaming on Amazon Prime. And while the film has long been considered one of Schwarzenegger’s lesser efforts, I am here to tell you that this movie is a wild, highly entertaining delight. The film takes place in the dystopian future of 2017 (lol), and from the opening text. I was in. “By 2017, the world economy has collapsed,” it reads. “Food, natural resources, and oil are in short supply. A police state, divided into paramilitary zones, rules with an iron hand.”

Sounds about right. Based on a novel by Stephen King, published under his pseudonym Richard Bachman, The film follows Ben Richards (Schwarzenegger) as a police helicopter pilot who is framed for massacring a crowd in Bakersfield during a food riot. After a daring prison escape, Richards is apprehended and forced to participate in “The Running Man,” a violent gladiatorial game show where prisoners, a.k.a. “runners,” are hunted by a team of armed mercenaries called “stalkers.” It’s a simple premise we’ve seen time and time again in films ranging from Battle Royale to The Hunger Games.

The game show is hosted by mastermind Killian, played by O.G. Family Feud host Richard Dawson, who is hamming it up to the Gods. And the film features all sorts of ’80s tough guys as mercenaries, including former Governor Jesse Ventura, football legend Jim Brown, and pro wrestler Professor Toru Tanaka.

The stalkers all have Mortal Kombat-style monikers like Subzero (he skates and has a hockey stick scythe!), Fireball (dude sports a flamethrower!), and whatever is happening with the electric stalker Dynamo, who is dressed like a murderous Lite Brite. Also, Dynamo sings opera, because why not? Apparently the actor/wrestler Erland Van Lidth De Jeude was also a trained opera singer.

I am a sucker for the 1980s future aesthetic. From the yellow spandex suits the runners wear to the Paula Abdul-choreographed dance numbers to the metallic high-cut leotards, The Running Man truly captures this bonkers styling. Apparently in the ’80s, the future looked as such: shiny spandex for the wealthy, and straight up garbage rags for the unwashed masses.

As Arnold and his friends make their way through the course, they find a resistance outpost led by Mic, who is played by Mick Fleetwood of Fleetwood Mac fame. Why is Mick Fleetwood in this movie? And is he playing himself? Nobody knows, but what a delight! Also, Schwarzenegger gets to use his trademark line “I’ll be back” in the film. Truly, what more could you want?

The film is delightfully flamboyant in a way that few movies are today. Most dystopian films made today are full of a gritty self-seriousness that seems intent on draining any fun to be had. The Running Man does not have that problem. It is bold and colorful and wildly over the top. It’s also peak Schwarzenegger, with Arnold cracking puns after every kill. “He had to split,” Schwarzenegger quips after chainsawing a man in half, dick-first.

I mean, this film has not one but TWO governors in it. What a ride. If you’re looking for an outrageously goofy movie that doesn’t take itself too seriously, I highly recommend revisiting The Running Man. They really truly don’t make them like this anymore.