Is the Government Currently Shut Down? This Site Tells You | The Mary Sue

This Website Tells You Whether or not the Government Is Shut Down, and Almost Nothing Else

We'd like dedicated binary websites for all our government questions please. 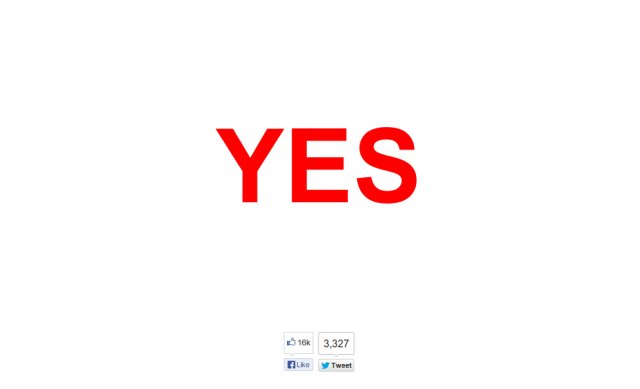 Isthegovernmentshutdown.com is simple in both idea and design. Navigate to the site, and if the government is currently shut down, it says “YES” is bright red letters. We’re not sure what it will do if the government ever gets its act together and becomes a thing again. Maybe a photo of Obama and Boehner hugging?

Besides the bright red “YES” there are also links to two articles on Quartz. The first asks, “The US government has shut down: Does that mean the Tea Party won?” The second outlines the people most affected by the government shutdown.

There’s also a Twitter feed of what members of Congress are saying during the shutdown.

It seems like the best way to find out if the government is still shutdown. You get an immediate answer, and you don’t have to watch any cable news to get it.