Marco Rubio Declines To Say How Old He Thinks The Earth Is — Declares He Is “Not A Scientist,” Proves He Is A Coward 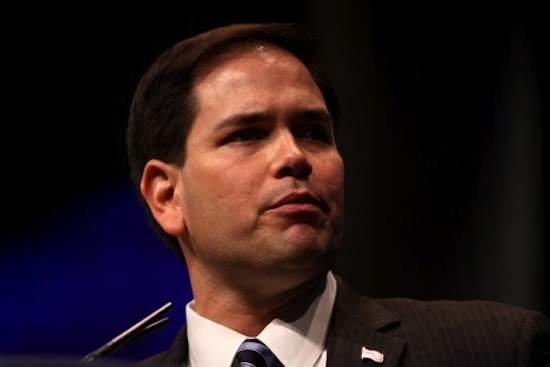 In a recent GQ interview, Marco Rubio was asked point blank how old he thinks the Earth is, only to respond that the answer to that question is “one of the great mysteries.” Good news, Marco! We solved it — the Earth is about four and a half billion years old. Don’t thank us, thank the hard working men and women of the United States Geological Survey. Now, about the way you delicately skirted that question, as if creationist theories about the age of the Earth deserve the same time and attention as USGS estimates…yeah, we’re gonna take issue with that.

Here’s Rubio’s full answer to the very, very simple question “How old do you think the Earth is?” It’s a masterpiece of vacillation, during which the Senator manages to use a lot of words to say nothing at all. Now talking out of both sides of your mouth is a tried and true political tactic, granted, but Rubio’s answer flirtation with creationism is troubling, and it’s not the most troubling thing here. Let’s go to the tape.

Marco Rubio: I’m not a scientist, man. I can tell you what recorded history says, I can tell you what the Bible says, but I think that’s a dispute amongst theologians and I think it has nothing to do with the gross domestic product or economic growth of the United States. I think the age of the universe has zero to do with how our economy is going to grow. I’m not a scientist. I don’t think I’m qualified to answer a question like that. At the end of the day, I think there are multiple theories out there on how the universe was created and I think this is a country where people should have the opportunity to teach them all. I think parents should be able to teach their kids what their faith says, what science says. Whether the Earth was created in 7 days, or 7 actual eras, I’m not sure we’ll ever be able to answer that. It’s one of the great mysteries.

We’ll ignore for the moment that Senator Rubio’s lack of qualifications as a doctor don’t prevent him from espousing a very clear policy on a variety of women’s health issues. We’ll even set aside the fact that that seeing science and technological achievement as no more important than what someone told you a magic book said does have a very real impact on the general climate and environment  in which technological innovation takes place, and thus a very real impact on how our economy is going to grow –that’s an argument for another day.

All this we set aside in favor of concentrating on the real problem at hand here: that Marco Rubio seems to think that beliefs are as valid as facts. That should trouble any thinking person, no matter what side of the political aisle they find themselves on.

No one here is saying that people don’t have the right to believe what they want, even if what they want to believe is demonstrably wrong by any metric you care to use. Believing something backward-ass that you have no evidence for is your right as an American, and nobody is going to take that away. So, Marco Rubio has the right to believe that the Earth was literally made in seven days, by magic. As a politician, though, Rubio also has a responsibility to let voters know if that that is what he believes, even when it is silly and empirically incorrect. Check that: especially when it is silly and incorrect.

So Marco, let us know what you really think — right or wrong. Because believe it or not, how you answer this question has a lot more to say about the quality of your character and your fitness for public office than what you think the answer is, and right now, you just come off as craven. It’s not a good look on you. You can do better, and Florida deserves better out of you.