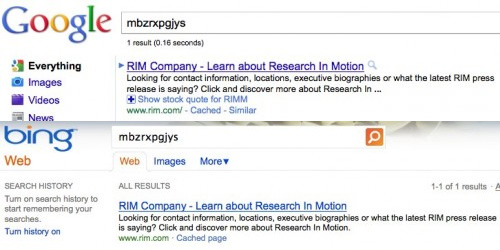 Over at Search Engine Land, blogger Danny Sullivan has the scoop on a pattern in Bing search results which, Google alleges, shows that Microsoft’s rival search engine is piggybacking off of Google’s search results. [Bing is currently an advertiser on Geekosystem and other Abrams Media sites.] The full, nitty-gritty details are available on Sullivan’s site, but in short, Google thinks that Microsoft is using search tools associated with its Internet Explorer browser to peek at users’ search behavior on Google, then effectively copying what they choose to click on. In an attempt to “sting” Bing, Google manually created 100 sets of search results for nonsense queries like “hiybbprqag” and “mbzrxpgjys”; for between seven and nine of those queries, Google found that Bing displayed the same results, which suggested that Bing was copying off Google’s answer sheet.

Stefan Weitz, the director of Bing search, didn’t deny that Bing engineers might be using Google results as a “signal” to determine how sites should be ranked: “Opt-in programs like the [Bing] toolbar help us with clickstream data, one of many input signals we and other search engines use to help rank sites. This ‘Google experiment’ seems like a hack to confuse and manipulate some of these signals.”

(Update: Microsoft has issued a stark statement: “We do not copy Google’s results.”

But Google Fellow Amit Singhal says that Bing is “cheating”:

“It’s cheating to me because we work incredibly hard and have done so for years but they just get there based on our hard work,” said Singhal. “I don’t know how else to call it but plain and simple cheating. Another analogy is that it’s like running a marathon and carrying someone else on your back, who jumps off just before the finish line.”

In particular, Google seems most concerned that the impact of mining user data on its site potentially pays off the most for Bing on long-tail searches, unique searches where Google feels it works especially hard to distinguish itself.

It is not, however, clear that Bing is doing anything illegal even if the allegations are true. Sullivan, for his part, says that he has “never — in 15 years now of covering the space — ever seen something like this.”

If Google’s charges are accurate, is Bing just being crafty in catching up with its search rival, which still commands a much larger market share, or is it crossing the line?