Why Iron Man Should Die in Avengers: Endgame

I hope they remember you. To this day, I remain a stubborn Tony Stark fan. But yes, he should die in Avengers: Endgame.

Plenty, myself included, have a feeling that Captain America, so nobly and beautifully embodied with an honest to goodness desire for justice and decency by Chris Evans, will be the one to make some form of sacrifice in Avengers: Endgame, the long-awaited and highly anticipated final chapter (of sorts) of the Marvel Cinematic Universe.

He is, and always will be, a hero who lays it all on the line for the good of humanity. He hates a bully, learns to take action against regimes and totalitarian powers, and grows a sense of independence apart from his uniform and cowl following the worrying events of Captain America: Civil War. He is, by and large, the most popular assumption of the hero most likely to bite the dust when it comes to who lives and who dies in Marvel’s epic conclusion.

It would be devastating and elicit a visceral response from those of us who, surprising even ourselves, came to adore such an earnest character. Evans, like Christopher Reeve before him and Gal Gadot after, demonstrated how virtuosity and frank goodness doesn’t have to be dull. In fact, it’s characters such as Steve Rogers that we so desperately seek out these days when patriotism is so marred by repugnant figureheads.

However, wouldn’t it almost be too tragic to really feel satisfying? A hero having jumped from one war to the next, straight into hiding, and then right back into the fray, only to meet his demise?

Maybe, just maybe, his is a fate that doesn’t have to be so written in stone, so etched into the brains of every other fan who believes they have this all figured out. This isn’t an argument for one character dying over the other, and if the film wants to show dedication to the narrative that it’s crafted over the last decade, perhaps there shouldn’t only be one (perhaps it’s presumptuous to believe that’s the obvious number of high profile fatalities). 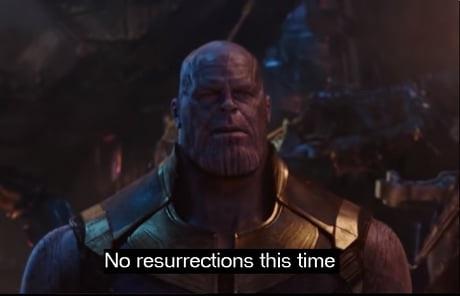 If this installment wants to hit a high mark of true, cinematic value and make those stakes feel real again, there’s one hero in particular who could bring this all full circle.

Iron Man and, more specifically, Robert Downey Jr.’s portrayal of Tony Stark will always be at the center of what made Marvel’s revitalization in film so enchanting, and his character has walked the line of the morally gray for so long that giving him a moment of ultimate sacrifice—no take-backs, redos, or timey-wimey nonsense included—would grant the universe a sense of purposeful gravitas it hasn’t leaned on hard enough up to now.

The Iron Man of 2008 wouldn’t work as well in 2019. His war criminal, womanizing ways just off-putting enough that even Downey’s overwhelming charisma might not have saved it. Since then, barring a few character missteps that felt more like a lack of clarity between directors’ visions than anything else, Iron Man has flirted with audience loyalty.

He was a crucial, beloved fixture in The Avengers, was given his best character arc in Iron Man 3, and began to show greater failings in Age of Ultron before the chips in the armor began to crumble in Captain America: Civil War. It was only in Spider-Man: Homecoming and Avengers: Infinity War where it began to feel like he was atoning for past misdeeds, and to finish it off, following the survivor’s guilt of those who “died” after the snap, it would make poetic, narrative sense for him—the one who was called out as self-serving by none other than Captain America himself in The Avengers—to make that final sacrificial act.

“The only thing you really fight for is yourself. You’re not the guy to make the sacrifice play, to lay down on a wire and let the other guy crawl over you.”

Plenty of other characters have gone on emotional journeys just as poignant as Iron Man’s since their debut—Captain America and, following Thor: Ragnarok and Infinity War, Thor especially—but simply put, Iron Man has been with us the longest, Downey’s portrayal of the hero the catalyst to what would become the studio to beat in Hollywood. His death wouldn’t just be a narratively effective and just way to end the character’s arc for good; it would have the greatest ripple effect and fallout throughout the universe as a whole.

Even as we lament the bulldozing of middle-market independent films, original stories, and anything that doesn’t have the stamp of approval of the header “remake, adaptation, or sequel,” there’s a clear eagerness for filmgoers to gobble up each and every superhero film that hits theaters. As a moment in film history (and it’s been a relatively long one), it speaks greatly to our current mindset that heroes continue to dominate the multiplexes in such astonishing, record-breaking ways.

We need heroes; we also need diverse storytelling on all different platforms and distributions, but that’s an argument for another article. However, we don’t need mindless, sanctimonious harmony, either. Iron Man embodies the very best and worst of us, and as he’s lived through his own trilogy and become the pseudo-antagonist of Captain America: Civil War, and on to the redeemed mentor figure of Peter Parker, it’s time for his story to end in the most poetic fashion it could, with him laying it all on the line to protect his fellow human beings in the process.

It would be the ultimate act of sacrifice and a reminder that the man who lives behind the billions of dollars, pigmented frames, and suit of armor was always destined to be a hero.