We Talked to the Guy Who 3D Printed a Working Iron Man Helmet, and It Was Awesome

We didn't even have to go to Afghanistan or anything. 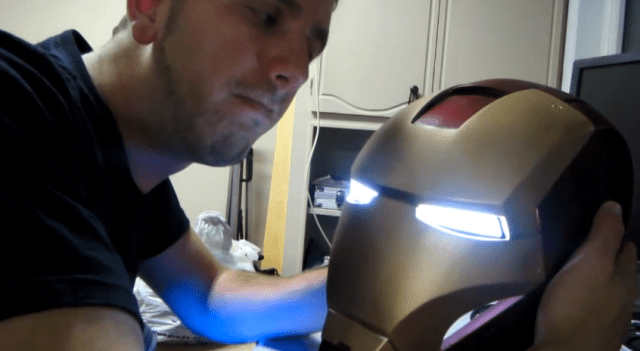 Yesterday, we saw video of Ryan Brooks showing off his totally awesome 3D printed Iron Man helmet and were completely blown away. Naturally, we wanted to know more about how he got into this kind of engineering and propwork, so we got in touch with him through his website (where he bills himself as the “real Tony Stark”) and had a chat with him about how he got started. His answers were surprisingly inspiring.

So were you a huge Iron Man fan growing up? Is this something that you’ve always been interested in?

I know! It baffles a lot of people. I love the movies — I saw the first movie and I was just blown away. Prior to that — well, I did play with LEGO, but who didn’t?

That’s a great segue to my next question: how much experience with engineering and tech stuff did you have prior to starting all of this?

I’d done one computer programming course in school, but other than that? Nothing. I was just inspired by the movie and was like, “hey, I wonder how much of that is possible?” I started researching and found other people that had made Iron Man costumes, but all of theirs were just that. They were just costumes. And I said, “Aw, this is the perfect opportunity for it to be functional! Why is no one making them move and light up?”

So I started researching and found a whole bunch of great resources just after lots and lots of browsing the Internet, and started experimenting. Looking back now, my first creations were very shoddy compared to what I can do now, but it was a first attempt.

Yeah! I mean, really. I did not know how big this community is. I offer my stuff on my website now, and I’ve sold 500 units in the past year all over the world. It’s just crazy that there are that many people out there with Iron Man costumes who need electronics!

Would you consider selling the helmet now that you’ve got a prototype for that?

A few people have asked me for it. What you run into with that is that all the electronics that I build, I own everything with that. The helmet is kind of a gray area because it’s definitely copyrighted material there. I know some other people on some of the forums that I browse have gotten Cease and Desist orders from Marvel, but that’s because they’ve been taking the actual 3D files from the movie — I don’t know how they got ahold of them — and then printing them and saying, “Here, give me money!” So I’m trying to be careful with what I can and can’t offer.

I actually was curious about what 3D printer you use. I’ve only ever seen stuff made with smaller Makerbot types, and they always come out very gritty and definitely printed, but your helmet looks very smooth and polished.

I actually had a Makerbot for the past year — well, no, I had three Makerbots at three different times and all three of them failed on me. Maybe I’m just really unlucky! But I was fortunate enough that the local university here [in Ontario] opened up a 3D print lab in February, and they have a Stratasys Fortus M360. It’s a nice big machine and it can do virtually any type of form because it has a dissolvable support material. So you can do a lot more creative things with that at a higher resolution. But even on that one I still notice what you’re talking about, so I had to do a lot if sanding. It took a lot of time, but it was worth it.

So now that you’ve finished the helmet, what are you focusing most of your efforts on? I see you have models for the arms and legs on your website already. Is that what’s next?

The reason why I went with those is that when I get to all of this being physical, I want it to be as functional as possible. The one scene that inspired me was in Iron Man when he’s wearing the silver suit and says to check the control surfaces, and all the things start moving in and out. That would be wicked to replicate that. So I’m trying to incorporate as many of those movements as possible, and the arms and legs seem to have the most of that. I figured, let’s get the tough stuff out of the way first before I wear myself down and hate this project, and then I can do the chest and torso and whatever.

Are there any different characters or types of armors you’d want to try next?

Obviously the first one I did was the briefcase suit from Iron Man 2, and that one went viral overnight. Again, looking at that one, if I did it again there’s a lot of things I would do differently. But that was my first attempt at a costume, really, and I would say it was 75% successful. 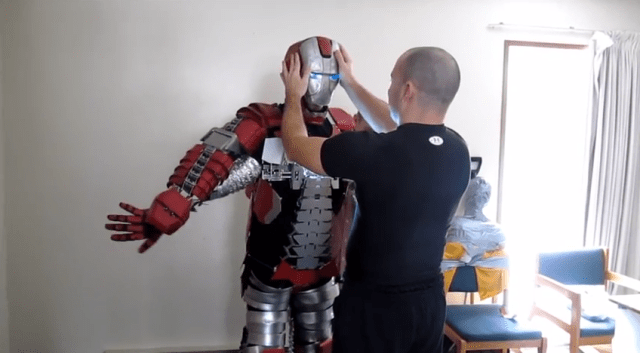 It’s impressive for a first attempt! Most people just put on a mask.

Yes, it was very ambitious. When I get an idea, it’s difficult to derail. Other ones… I did the Hawkeye quiver and bow for my brother, and that turned out really cool. I’ve been experiment with the idea of doing the Mark 42 from Iron Man 3 where the pieces kind of assemble onto him. I’ve kind of figured out a way to do that, but it’s a lot of money. So… yes I can do it. Now? No.

Would you use magnets?

I was thinking that with the advent of the quadrotor or quadcopter — they can lift considerable weight, so you can navigate them to you. Basically they’d be picking up the parks and assembling them onto me. It wouldn’t be as fast as the movie but it’ll be a lot safer!

Other than that, I mean… a lot of other people are commissioning me to do characters that they want. One guy just asked me to do something for Assassin’s Creed, but not the actual costume — he wants an Apple of Eden that glows and then gets brighter when you touch it.

What would you say to people who want to make their own props or electronic costumes and have no idea how to do it?

In my spare time, I’m a supply teacher, and I love it. I get to go to elementary schools and and the first thing I always do with them is play Two Truths and a Lie, and I get to tell them all these ridiculous things about me that have nothing to do with my education and everything to do with my passion. So I say to them, if you guys have no idea how to program or do electronics, the Internet is just the best teacher out there.

Specifically I always recommend Sparkfun. They are the Google of the electronics world — they’re just the best at what they do. They have  an affordable kit that teaches you from scratch how to make your own circuits.  There’s also a great website called Tinkercad – it’s 3D modeling, and it’s set up to teach kids how to 3D model. They are great resources that are perfect for beginners.

Thanks to Ryan for taking time out of his busy schedule of teaching kids and saving the world to talk to us. If you’re interested in seeing more of what he does, check out his website and Youtube channel.