100,000 People Have Downloaded Plans for a 3D-Printed Gun, California Already Moving Towards Ban 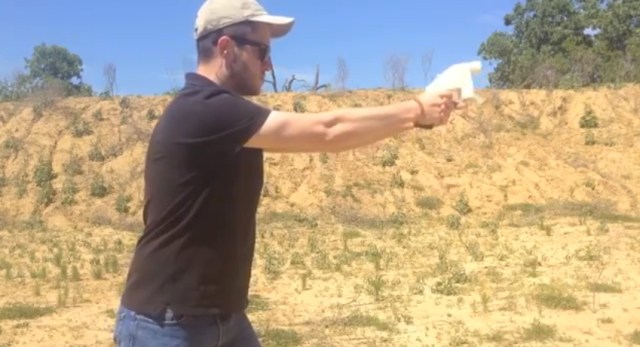 It seems like just the other day we were bringing you the first footage of a 3D-printed plastic gun being test fired, mostly because it was totally just the other day. Since video of the successful test fire and plans for the gun — a single-shot affair known as the Liberator — were posted earlier this week, more than 100,000 people have downloaded the instructions and blueprints for the weapon. Meanwhile, proving that Newton’s third law of motion holds up pretty much everywhere, a California State Senator is already drafting a bill to outlaw 3D-printed guns in that state.

Defense Distributed, the open-source weaponry group behind the Liberator prototype, told Forbes they were surprised by the popularity of the schematics this week. California State Senator Leland Yee, meanwhile, was also surprised, but his surprise took a different turn, prompting him to begin drafting a bill that would ban 3D-printed guns in the state over concerns that they would be too hard to trace or keep out of the hands of criminals.

Now, it’s important to remember that nowhere near all of the 100,000 people who downloaded these plans are going to print guns. Many, no doubt, are simply the intellectually curious type, interested in seeing the schematics and learning more about how the items work. Some are just avid 3D printers of other items who are curious about the stress and heat the weapon can absorb, and the techniques that made it possible.

The downloads really shouldn’t worry anyone that much, because if you’re looking for a gun and you aren’t supposed to own one, there are still plenty of ways for you to get one, from a gun show to a dealer who simply doesn’t do background checks. It’s not hard to get a gun, and building a really poor one in a 3D printer isn’t exactly the most efficient means of doing so.

That said, the long-term application here is that people who we as a society have agreed should not have access to firearms for a number of reasons — let’s just pick “domestic abusers” out of the hat as an example — will be able to print their own, hard to detect weapons whenever they please. While that’s not something a law like Yee’s will probably stop, it should give us pause to think about what that means, and if it brings us closer to or farther from the world we want to make.

Now, since writing pretty much anything about guns on the Internet will get you classified as either a right wing nutjob or a liberal (effete at best, police state at worst) in comment threads from here to Facebook, I’d like to take a moment here to acknowledge a couple things, if you’ll indulge me.

First, like most of you, I’m just some guy, and while I know that some of you will expect me to be a 100% neutral observer of the world I live in, the fact is I’m not. I could tell you I am, but I would be bullshitting you and we’d both know it, so why bother? Like you, I have friends and family and a history that’s at once really complicated and totally boring. And I have feelings about things. Most of the time I try to keep them to myself, but as I’ve pointed out, I’m going to take flack from one side or the other on literally whatever I write here, so you should know where I’m coming from on this one when you’re accusing me of hating freedom or being a sociopath in the next five minutes. I think we can respect one another that much. Or, at least, I can catch hell from people on both sides of an issue, in which case I will feel like I’ve done my job.

All of this is to say that I, like most of you, have a stance on gun laws. And like I imagine most of you, it goes something like this: Most of the time, I just don’t give much of a crap. Not to get all silent majority on you, but I genuinely believe this is how most people really feel. Not doing anything unseemly with your guns? Great, have fun. Do something stupid or dangerous or harmful to someone else with your guns? No more guns for you. Pretty simple, really.

I wasn’t raised around guns, but have had many a good time firing off a couple of rounds at a range or the back forty of a friend’s property. Coming from gun country — the Pacific Northwest — I have friends and family who are gun owners, and gun dealers, and avid hunters. I have a grand total of zero problems with responsible gun ownership. It’s a thing I choose not to do, but it’s not my business if someone else does, and it’s not really my business whether that’s a handgun or a big ass rifle. So long as you’re not looking to hurt me or mine with it, it’s not my business what you do with it. If taking an AR-15 out in the woods and knocking over cans with it is your thing, I’m not one to judge. And not for nothing, but a thing being mentioned in the Constitution is something I take seriously. After all, the Second Amendment is right below the one that’s key to my making a living as a journalist, and if you’re going to respect one, you should damn well respect the other nine.

Do I sound like a gun nut yet? I hope I don’t, but I’m sure I do to some of you. Don’t worry, though, I’m about to piss off the other half of my readers, too, so you’re in good company.

That’s because to steal a well-worn phrase, with great power comes great responsibility. And that responsibility means being accountable for the firearms you own. That means being above the board, and having a license and some basic safety training in the extremely dangerous thing that you’ve decided you want. It means when you buy a gun, whether it’s at a shop or a show,  you go through the same basic regulation that you go through for plenty of other things in our world — whether you want to drive a car or make a sandwich at Subway. You put your name next to it and acknowledge your responsibility for it, because if you’re going to go to the Second Amendment to tell me why you should be allowed to own any gun you please, you don’t get to ignore the “well-regulated militia” part of that sentence. You just don’t.

That means I believe in thorough background checks to keep people who we’ve decided aren’t responsible enough to own guns from owning them.  It means keeping guns unloaded, locked up and away from children. I know, I know, most of you do, and great, but the fact is if we were hitting 100%, we wouldn’t be seeing pretty much weekly stories of kids accidentally killing themselves and others with guns. Guns they probably didn’t unlock themselves. Guns they almost certainly didn’t load themselves.

This in turn means I am, in principle, uncomfortable with the idea of people cooking up homemade weaponry in their basement, though I also don’t labor under the impression that there’s any law that’s going to stop it. As I’ve said here before, the genie is out of the bottle on this one. For my money, though, I’m much more comfortable with the idea of a licensed Glock than a homemade Liberator, because the guy with the Glock doesn’t give me the impression he has anything to hide. The guy with the Liberator worries me. And I don’t know what the solution is here, so I’m not going to pretend I do. But I hope I can admit to being worried by a development without leaving my integrity at the door.

So yeah, I believe people have the freedom to own guns. I also believe that freedom does not come without responsibilities to the social contract and the people you live around, and that there should be consequences when that freedom is abused. Here’s hoping that stance hasn’t become too controversial in these troubled times of ours.