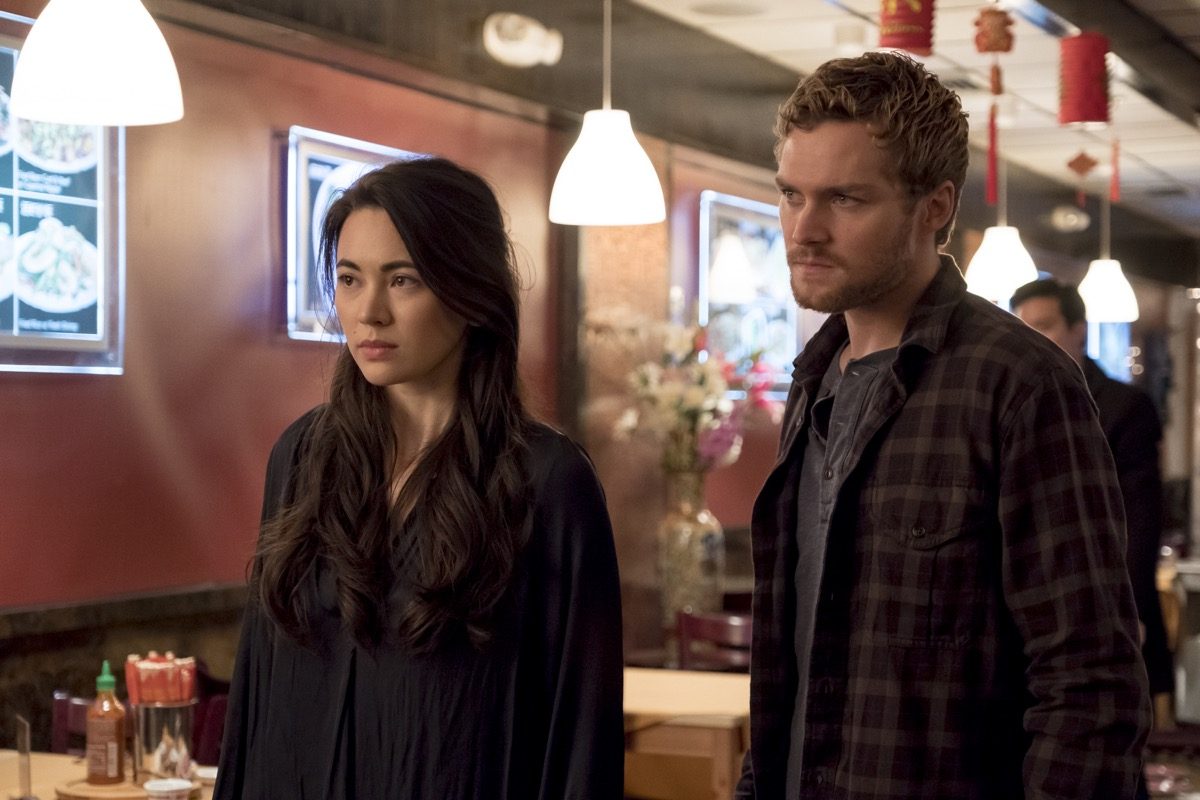 I was pretty emphatically not a fan of the first season of Iron Fist. I found the corporate scheming tedious, the fight scenes less than compelling, and Danny Rand to be an entitled, boring cypher of a character.

However, in season two, the showrunners have totally surprised me with their subversive treatment of a tried-and-true superhero plot. In this season, the power of the Iron Fist is stolen by Danny’s rival and once-brother Davos, and so, with the help of his friends, he needs to find a way to recover his strength and reclaim the Fist. Training with Colleen Wing, working with Misty Knight, and even teaming up with Ward Meachum, he does all that and more. However, instead of renewing his sense of purpose and commitment to being the Iron Fist, this plot does something unexpected: It convinces him that he’s not the one worthy of wielding the Iron Fist; Colleen is.

And even more refreshing, this realization doesn’t depress Danny or send him into a spiral. It frees him. I have never been a fan of Danny Rand as a character, but when I saw him grinning in the final scene of the season, I actually felt something for the dude. By switching things up in its second season, Iron Fist—of all shows—has somehow made a neat story about the oppressive narratives of patriarchy, and how great it feels to free yourself from them.

When the season opens, Danny is decidedly back on his rich kid, Chosen One bullshit. By day, he’s slumming it as a mover to learn the “value of the dollar” and experience “a hard day’s work.” (Cue the eye roll.) By night, he’s running around Chinatown as a vigilante, purportedly to stave off a war between the two triad gangs and keep his promise to Matt Murdock to “protect his city.”

However, it quickly becomes clear that his motives aren’t really that pure. His first line of the season, after he stops a robbery, isn’t a warning to stay out of the neighborhood or leave the innocent alone. It’s a boast about the power of the Fist: “You saw what this can do. So apologize, before I break your face.”

Throughout the season, Danny struggles to find a way to make peace between the two rival gangs, the Hatchets and the Golden Tigers. “I’m just trying to do what’s right,” he tells Colleen. “I can’t just sit here and do nothing,” he says. “All of my attention is focused on protecting the city,” he tells Ward. Over and over again, Danny declares that he’s only patrolling so ferociously because he has to—because it’s his duty as the Iron Fist.

Colleen, however, suspects that something else is going on. “You have not been home in days,” she says. “You barely sleep when you are home. How many times a night you light that Fist up? … This has nothing to do with the fact that K’un-Lun is gone? That the Hand is gone? And without them, the Iron Fist has no clearly defined role?”

Danny promises that he’s okay—that he can handle it—but Colleen isn’t the only one who sees through him. “First, they’re afraid,” Sherry Wang warns Colleen. “Then they’re furious at themselves for this fear. I see it in the eyes of my husband’s men: impotence disguised as confidence. They’re so afraid, they want to burn this city down.”

Of course, Danny never gets so out of control that he burns the city down. Halfway through the season, Davos steals the power of the Iron Fist from him through an ancient, obscure ritual. Davos then breaks Danny’s leg and sets off on a campaign of slaughter through Chinatown. His power gone, his mobility diminished, Danny finally admits that he “lost control” of the Fist.

“I wasn’t gathering or centering chi,” he says. “I was just burning it up,” and as he burned up that chi, finding it easier and easier to summon the Fist, he could feel the dragon Shou-Lao inside him. “I welcomed him,” he tells Ward. “All of his—his anger, his power, and his rage. And when the dragon was really with me, it felt good. It felt like I could break the world.” 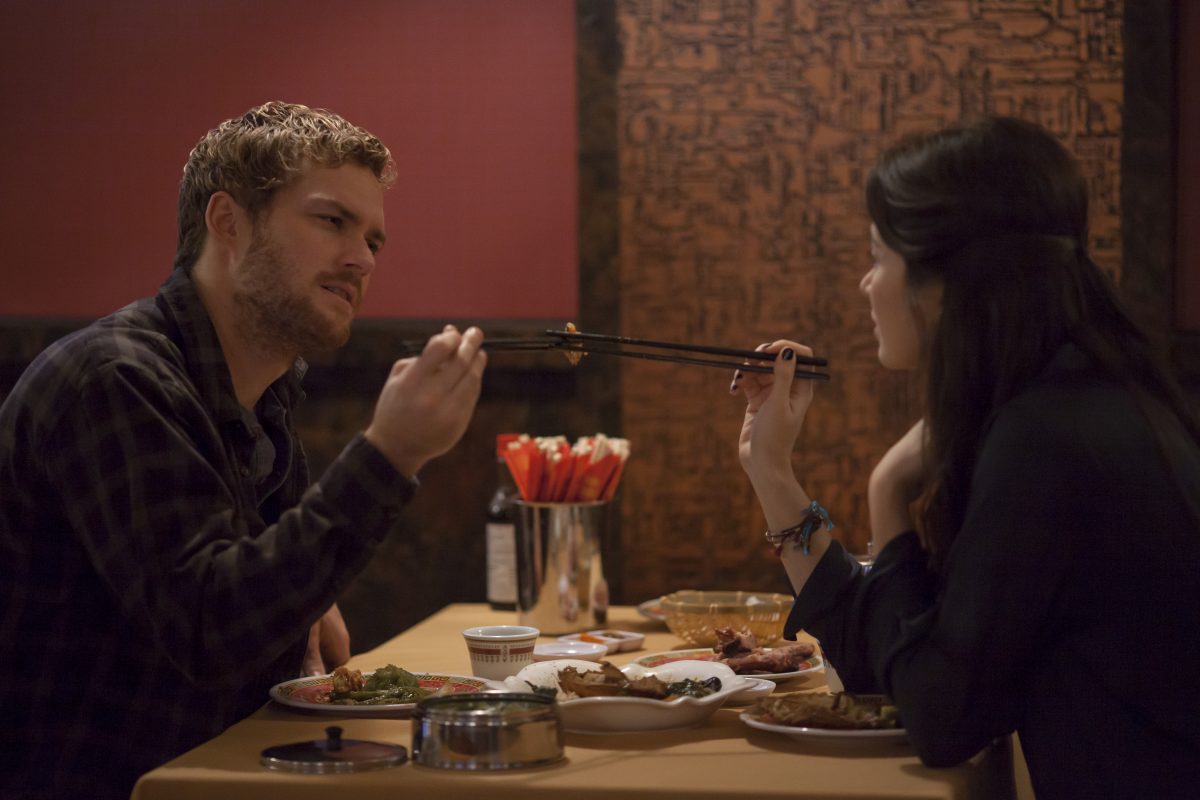 But even though he says the power of the Dragon felt good, whenever he talks about the future he wants, Danny seems to be imagining something far more mundane. “I wish there was a world where we were past all of this,” he tells Colleen. “Where dinner at the Silver Lotus was just dinner. And people on the street don’t turn out to be surveilling us. We could track down Frank Choi, find out about the box, the ledger, your family.”

When Colleen asks him what he wants out of dinner with Ward, Joy, and Davos, he answers simply, “I just want it to be good with us. All of us, you know?”

Even when it comes to facing Davos, who kidnapped him, wounded him, and stole his power, Danny doesn’t dream of defeating him. He wants to talk to him. “Even after everything he’s done, I still wanna find a way to reach out to him, heal him,” he says.

But before he can approach Davos, he needs to get stronger. Ward outfits him with some Rand technology to help his leg heal, and Colleen agrees to train him. However, she warns him that physical training won’t be enough: “The final step is controlling your emotions,” and when we come to the climax of Danny’s training, Colleen challenges him to prove that he can “think and choose, not just feel and react.”

As their final training fight progresses, she offers him empathy: “I used to come here and fight until I couldn’t see straight.”

“What changed?” he asks.

It’s the key question—the hero question—the one that, in a typical superhero story, would remind the hero why he became the Iron Fist in the first place and why he needs to wield it.

But when she asks that question, Danny doesn’t look newly reenergized. He looks freaked out. His eyes are red with cold, and his mouth is pained. He launches a furious volley and manages to kick Colleen on her back, but as he goes to claim victory, his hand clenched in a fist of rage, he stops. He stares down at his fist, slowly coming back to himself, and bolts from the arena.

When Colleen follows, he explains himself: “You asked me to remember what I was fighting for,” he says. “Truth is … it isn’t Matt Murdock’s mission, or our neighborhood. It isn’t Davos. It’s not even you, Colleen. All I’ve been fighting for is the power of the Iron Fist.” He admits what she’s suspected all along, that the obsessive patrolling was just a release, a way to feel clarity and power, and so he asks her to take on the mantle instead.

At first, however, Colleen resists, telling Danny that it has nothing to do with her. She offers to help him, but not as the hero of the story. “I will help you,” she says. “I’ll support you. I’ll train you. I’ll do whatever it takes …” But she is emphatic about who is the hero, and who is the sidekick, here. “You are the Iron Fist,” she tells him.

Eventually, though, Colleen comes to accept and embrace her own strength. When BB, a young street kid she was mentoring, is murdered, she has to fight his killers, but she doesn’t lose it. She doesn’t kill them all, or go too far. Even in her grief and her rage, she is in control, and so, to help her community as best she can, she agrees to take on the power of the Dragon. “I was so afraid of what I’d do with a weapon in my hand,” she says. “I’m not afraid anymore.”

By the time they’re racing for their final confrontation with Davos, they’ve completely switched roles. Colleen, imbued with the power of the Fist, is shouting out the plans—“We’ll need to find a way to grab a hold of him”—and Danny is there to play a supporting role: “I’ll be there to help with that.” (Literally, that’s his line.) And in the end, neither of them is able to tame Davos alone. They’re only able to do it together, but Colleen is the one who’s capable of wielding the Fist. 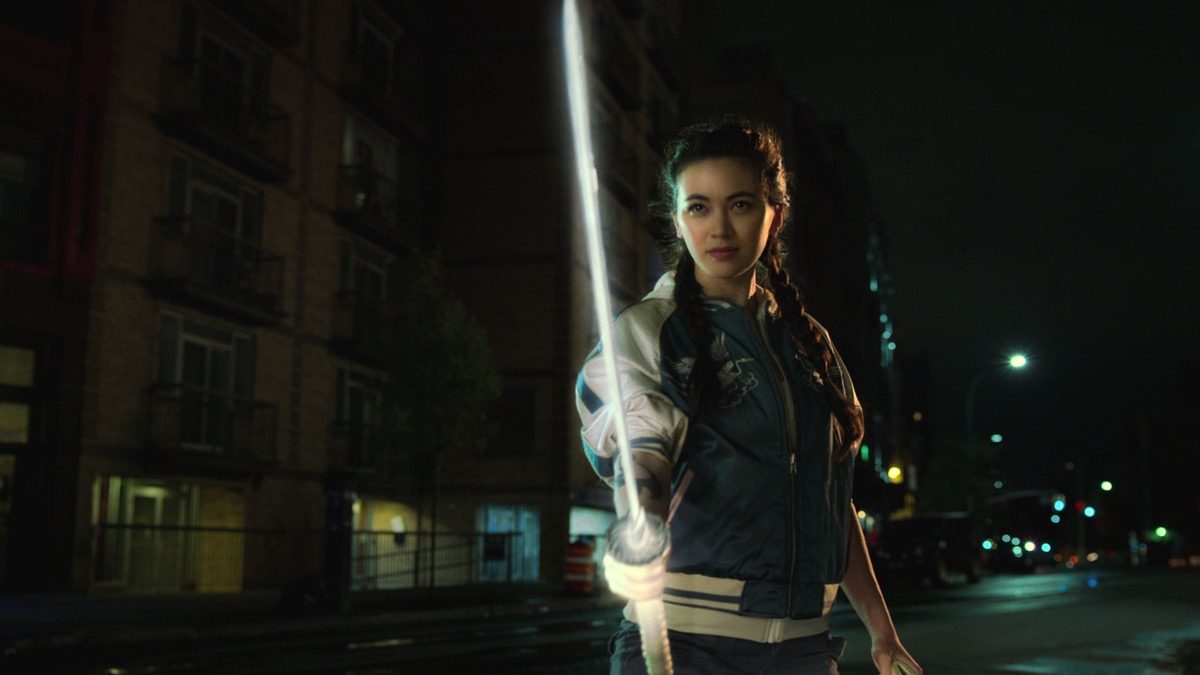 Now, even at this point in the season, my skepticism was still high. I was worried that the show would hand Colleen the Fist for half of next season before giving it back to Danny. Colleen would become the steward of what is rightfully Danny’s, the sidekick who’s only there to hold onto power until the real Iron Fist is ready. And let’s be real—they could still go that way.

However, the writers of Iron Fist go out of their way to establish that Colleen is just as much an heir to the Iron Fist as Danny. She discovers that she is the descendant of Wu Ao-Shi, an actual goddamn Pirate Queen and “the first woman to defeat the Dragon.” She is a female Iron Fist, descended from female Iron Fists. She’s not only the stronger one in the present; she’s the special one, the destined one, the one with the mysterious and powerful bloodline. As Danny writes in his farewell letter to Colleen, “It may be that the destiny that I believed was mine was always hers, always yours, from the start.”

And thank God for that. Because when we next see Danny, “a few months later,” the scrunched, scowling face we’ve seen all season is gone. He’s lousy with confidence, running off having adventures with Ward. He’s got the strong relationship with his “brother” that he’s always wanted, he’s got a sense of purpose, and he has some truly ridiculous chi guns that suit him so much better than the serious calling of the one and only Iron Fist.

And all he had to do to get here? Let go of the narrative of his own specialness, recognize the power of others, and ask what he actually cares about and wants.

Now, going forward in the series, there’s definitely still some cause for concern. Danny tells Ward, “I want to be worthy of the Iron Fist,” suggesting that he and Colleen could end up fighting over the Fist. (Ugh.) And as much as I enjoy Danny and Ward’s dynamic, Lord knows I do not want to watch these two rich white dudes “find themselves” in Asia for an entire season.

But, still, I never thought a season of Iron Fist would end with me rooting for Danny Rand’s happiness, and this one did.

So here’s to hoping.