Irish Jack-O-Lanterns Used To Be Horrifying | The Mary Sue 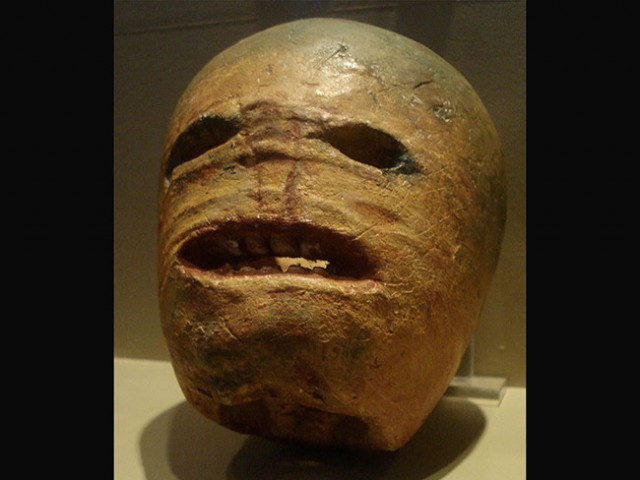 Hey, you know how most carved pumpkins this time of year are kind of light-hearted and cute? Because the Jack-O-Lanterns of 19th century Ireland—carved out of turnips, because nobody who lived in Europe had heard of pumpkins yet—were horrifying monster vegetables. Also, don’t even get us started on why they’re called Jack-O-Lanterns, because that noise is effed up.

Back in the day, Irish Central tells us, the Irish carved turnips, beets, potatoes, and something called a mangel wurzel (which ALSO makes for a really messed up Jack-O-Lantern, in case you were wondering) into faces to light the way for revelers on Samhain, AKA the pagan Gaelic version of Halloween that existed before the Christians swooped in and stole it—so suck on that, Kirk Cameron!

Anyway, according to old Irish legend, this guy named Stingy Jack convinced the devil not to take his soul to hell by basically messing with him a bunch over the course of his lifetime—but then when he did die, heaven didn’t want him either, because he was still kind of a dick.  So instead he was doomed to walk the Earth between the realms of the living and dead, with only a messed-up turnip lantern for company. Moral of the story there is that bad people wanting nothing to do with you does not automatically make you good person, I guess.

It wasn’t until Irish and Scottish immigrants came to North America and discovered that pumpkins makes for much better sculpting material that the Jack-O-Lantern took on its now-iconic orange look. But in places where there aren’t many pumpkins to be had, people are still making these creepy suckers. Here’s another more modern turnip-o-lantern from Cornwall, England: 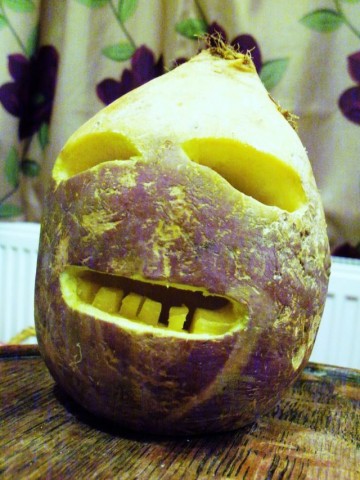 GNAH. What is it about a non-pumpkin Jack-O-Lantern that is just so full of nope, guys? Is it just that we’ve been conditioned to accept pumpkins and don’t find them disturbing anymore, or are turnips just inherently more creepy than pumpkins? Or both? Both is good.

Funny thing is, these carvings probably were meant to be light-hearted and cute. It’s just that the more rural parts of the British Isles are bad at that sort of thing, especially in Ireland. As comedian John Mulaney once said in a bit, “Irish people don’t want comfort. Look at a sweater made in Ireland — it’s like a turtleneck made out of Brillo pads.” Or, as a quote often attributed to Wiliam Butler Yeats says, being Irish gives you an abiding sense of tragedy which sustains you through temporary periods of joy.

As a descendent of the Irish, I can confirm that from personal experience here: we’re a very casually morbid people who are deeply and subconsciously troubled by the thought of warmth and inner peace. That’s why Halloween is the perfect holiday for us, really. So watch out for Irish turnips in your merriment tonight, readers! Cuz they will freak you out something real good.